Further adventures in France, and in French 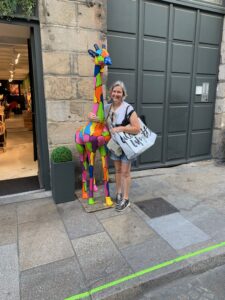 I’m running a bit.. behind in my blog posting. Like three months behind! I meant to post this back in September, to follow up with more Fascinating French-landia for all you Franco-Philes out there! But best intentions yada yada yada… Anyway, anticipation is half the fun, right? That’s probably more true in France than anywhere else!

First up was our unanticipated trip to the Aquarium. That’s L’Aquarium in French, ahem. La Rochelle has a big one. We walked or biked past it every day on the way to our classes for four weeks. It looked like a great way to pass some time in air conditioned comfort during the hot spell (“canicule”) that La Rochelle was suffering. But apparently we weren’t the only ones who thought so, because the line was out the door, down the stairs, and out onto the street. I would have shriveled up and died in the heat waiting to get in and cool off!

But finally our time was coming to a close and we leapt at the chance to get tickets – for a 9:00 p.m. visit. It’s much more spectacular than my photos attest, like sharks and rays and wildly patterned colorful things. But I at least wanted to share a few close-ups. I was particularly excited that I could sometimes understand long stretches of the French audio guide!

Next up is Le Musee des Automates. Remember automatons? I’ve seen them in movies like Big and Hugo, but if you think about it, all robots and androids are descendants of these automated, humanoid machines. They’re also very steampunk, or so I hear.

The museum itself is about to undergo serious renovations, which I thought was a damn good idea. It’s kind of a podunk little place, and it has a lot stuffed in there, so physically they need to figure out how to make it more amenable to guests.

But much more than that, they need to make the museum much more thoughtful and proactive in talking about the incredibly racist, sexist collection. I get that they are limited to the automatons invented during a very racist, sexist time. But you can’t just open up a museum to the public and put up these horrible images without talking about their effects. And when I went to grab a link to the museum to put in this post, I saw that there are automaton museums in Paris and Lyon as well! So all you automaton museum people in France: listen up. This (clapback emoji). Is. (clapback emoji) Unacceptable. Do better!!!

Anyway, here are a very few of the less offensive machine-people, though I’m not at all sure what to make of that last one:

It turns out that one pandemic does not a chef make. I don’t even think two pandemics would do it. Instead, I need to keep learning cooking things – and fortunately, I want to. I found a one-afternoon cooking class in La Rochelle and had a blast making a sort of a crèpe-thing with chicken, a fancy salad, and a chocolate dessert. It was almost Father’s Day in France so at a lot of the kitchen stations were dads and sons. We bantered!

I recognize that this is not all that attractive. However, I was proud that my crèpe-tortilla-things did not tear and that my chicken mix – which is lodged therein – was tasty. Also, no one, to my knowledge, got food poisoning, so already that’s a huge win. My normal cooking attempts do not tend to, you know, look all that good, generally speaking. So I was okay with making a hash of everything, exacerbated by having to bring it home on my rental bike (see below for exciting pics of that adventure!)

The tomato salad with whipped goat cheese was similarly scary looking, but very tasty. Believe me, I get it how some people think food should look as good as it tastes. I’ve read somewhere that French cuisine is notable for its precision – for example, if you chop a carrot, all the little carrot pieces would be the same size, so that cooking them would produce the same taste and texture result, as well as a pleasing image.

HAHAHAHAHAHAHAH. I am happy to say that this place was MUCH less rigid. I’m somehow never thrilled with how my stuff looks, but when it tastes as good as it does, it doesn’t bother me AT ALL. Wine also helps, and the wine in that picture was delicious.

The prettiest part of the dinner was the three-tiered chocolate dessert. We melted different colors of chocolate and added gelatine, then added them to our parfait “cups” one at a time. The cups went in the fridge in between layers. At the end of the class, there were indeed three stripes of chocolate in our cups.

All I had to do was get them home

It was about a 30-minute bike ride back to our little apartment in downtown La Rochelle – a highlight of the experience, actually. Our rented bikes had baskets on the front, and I brought jars and tuppers to the class for just this purpose. You wouldn’t believe the different kinds of ground you can cover in thirty minutes on a bike – from highways to city center to horse territory to graffiti-covered back lanes and trails alongside the ocean.

Arguably, I should not have taken a couple of those pictures. Like the one in traffic??!?! What was I thinking?

But when all was said and done, and eaten, we had to chalk up the whole experience as a win. The food was good and summery, the school taught me some new French words, and I made appropriate use of that bike basket! (Next time I will put a baguette in there to get the full France-as-seen-by-Richard-Scarry experience!)

All the way to Nantes

We made a weekend of a trip to Nantes. This was occasioned by the presence in France of my online French teacher, Gäel, who I found through the italki language tutoring site. Normally, he and his wife and daughter live in Kyiv. They got out about twelve hours before the first bombing started, and returned to Gäel’s family’s hometown. Ramon and I met him and his family in Nantes, and sampled the regional cuisine (well, buckwheat crèpes from Bretagne, but Nantes is right close.) We also explored Nantes and it’s bigger than La Rochelle, and absolutely monumental with its cathedral and a castle with a real moat!

If you’ve ever had a cookie with a chocolate rectangle on it, called the Little Schoolboy (“Le petit écolier”), it was born here in Nantes, France. Unconscionably, there were no free samples.

Anyone who knows my honey knows he loves to shop. There was no shortage of shops in La Rochelle, but Nantes was waaaaaaayyyyy better! Our first stop was Uniqlo, which we are both crazy about. If you haven’t been to one of these stores, get thee hence! The prices are reasonable for all kinds of wardrobe staples like t-shirts, dress shirts, and puffy jackets. Then it was just cute little street after cute little street of shops. Ramon got me a gorgeous magenta backpack and a scarf I’ve already worn twenty times. There were buskers and coffee shops with tables on the rue… really lovely.

One of our favorite spots was Le Passage Pommeraye, which in addition to having cool shops – menswear for Ramon, and for me, tights, books, purses, and a Harry Potter store! – was also in a gorgeous setting with skylights.

And with a giant rainbow colored giraffe outside for hugging, how more perfect could Nantes have been???

The journey is half the fun

Ramon bought a car before we left Madrid. We haven’t had one in a long time so it was wonderful and surprising to feel like we could go anywhere, do anything, whenever we wanted. We even found parking in La Rochelle, thanks to our Airbnb host. It had a car elevator! We drove in, pressed a button, and were raised up to the top floor. The elevator was TINY but the car fit right in. That’s when you know you ain’t in Kansas anymore!

The drives to and from La Rochelle were eventful. Not in a bad way – just in seeing the sights along the highways and stopping for the night in the San Sebastian region, both ways. Spain has lots of those giant white windmills throughout the north, and these bull silhouettes that are somehow charming. France was much more agricultural as we drove up the west highway, but hitting Bordeaux was horrific in terms of traffic. It took us longer to get around that one city than the rest of the trip, with massive traffic jams full of trucks. I can’t imagine all those trucks were filled with wine!

Thanks for visiting France with us!