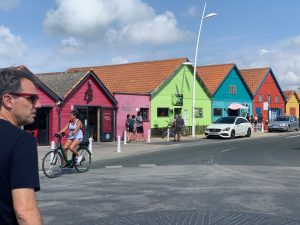 From my earliest days, “France” has meant “Paris.” I blame Richard Scarry. Remember his books when we were kids? Busy colorful pages of rabbits, elephants, cats and bears doing all the things we do, going all the places we go, teaching words in contextualized clumps.

I remember having these books around and in particular one about other places in the world.

My first visit to the country with Ali and Shane was grounded in what I had always thought of as France. Eiffel Tower. The Seine. Notre Dame. Food. History. The Louvre. Fashionable people.

But I’ve just had a month of discovering another part of France. Ramon and I went to La Rochelle to study French. La Rochelle is a small-ish city on the Atlantic coast, a port city with a long history.

This year we left Tunis after living there for five years. It felt like home, even despite the fire in our beloved apartment, and despite the fact that neither of us spoke French – not to mention Arabic – fluently. Our August in La Rochelle was going to fix that, at least a bit. We had small group classes three hours each weekday morning at an academy called Inlingua, and an hour one-on-one with a teacher each afternoon. It sounds intense – and it was – but four hour days (plus weekends free) still allowed for lots of walking, exploring, shopping, cooking, eating, biking…

This corner of the Atlantic coast features large and small islands and an irregular coastline. Île de Ré is a big one, connected to La Rochelle proper by a 2-km-long bridge.

There are lots of small towns at water’s edge. It’s great for tourism because of its temperate climate, though the water is awfully cold for swimming (says the former Tunisian transplant, from her perch over the bath-water comfy Mediterranean). We weren’t far from Cognac or Bordeaux or the Loire Valley, all brimming with wineries and castles.

One Sunday, we visited Île de Ré. We went by bike and crossed the bridge just as sprinkles were beginning to dot the inlet. But the rain stayed away and we rode an hour down the long island on perfect bike paths past vineyards, to arrive in Saint Martin. There, we crossed an old moat to get into the walled city. Before I made the map for this blog post, I thought we had made it all the way to the end of the island! But no, there was a lot further we could have gone. The rental bikes were really heavy and slow is all I can say in my defense!

Saint Martin features a bustling port full of tourists eating and shopping – which feels somehow miraculous compared to La Rochelle proper, which locks up almost entirely (like the rest of France) every Sunday. Ramon finally got some moules – mussels – and the bowl was so generous he couldn’t finish them. Me, I went whole hog on the ice cream, which was di-freaking-vine.

Somehow Ramon didn’t want anything to do with the pantalooned donkeys for hire. Yep, they really wear little striped pants. We never figured out why.

Another island we visited – this one by car – offered an ancient castle, dozens of colorful artists’ workshops and stores, and, of course, all the moules you could eat. (Which for me is… none.) We left La Rochelle that morning en route to the nearby city of Rochefort, where we saw a monument to the town’s war dead, empty streets, and a Gendarme training academy.

Ramon kept acting surprised there wasn’t more of an effort to sell the cheese… which I tried to tell him was actually not Rochefort but Roquefort, but apparently I wasn’t firm enough about it. I even tried to get him some cheese at a regular store, just so he’d feel like he’d “done” Rochefort properly. Now we have a deal: when he is convinced of something that is patently wrong, I am supposed to tell him very forthrightly until he gets it.

We didn’t plan to visit the Île d’Oléron, but as there wasn’t much to do in Rochefort (ahem), we drove around and spotted a road that would take us to a castle. That sounded good. Up and over another looooong bridge, we noticed the tide was out. And when the tide goes out there, it goes way out. All the boats in the harbor were not in a harbor so much as leaning over precariously in gray-brown gluck. Looking back out toward the bridge, we could see dozens of people standing doubled over, way out in the harbor, deep in the muck where a few hours prior an ocean had been. They were working little beasties – mussels and oysters and the like – out of the mud.

It was very disconcerting to see the boats looking so hapless, and the basin so empty of water. I worried it would come back in in a rush and drown the people who were collecting mussels. It seemed, in a very primal way, very wrong and dangerous.

But of course, it happens twice a day. Everyone is used to it there. They just go about the business of being a cute little town and a castle for the tourists. By the time we left the water was back. We went over the bridge and it was a bridge over water again. That’s weird, right? Or is it just me?

Ramon seems fine with it.

Living in La Rochelle was mostly very relaxing. The first two weeks were unseasonably hot – as across much of Europe – but that didn’t stop the hordes of tourists who descended on the town in a never-ending flow. Rows and rows of restaurants and bars flank the port, but still it was so packed it was hard to get dinner. There were all kinds of buskers, including breakdancers and acrobats and a guy who called himself Mr. Orange. It was an eternally lively scene, no matter the time of day or night.

Our lives were structured around our French classes and so considerably quieter. I would shop the fruit and vegetable market for stuff to make dinner, ride my rental bike to school, and study or do a little work in a coffee shop afterward, maybe stroll around with Ramon and look in the shop windows, or up at the beautiful balconies, or out at the billions of leisure craft in the harbor.

All of this gave us so many opportunities to practice French every day, and we both improved enormously – quantum leaps. More on La Rochelle – and more on western France – in a second post to come. I need more time to figure out when to say France, when to say La France, and when to say, Au revoir!