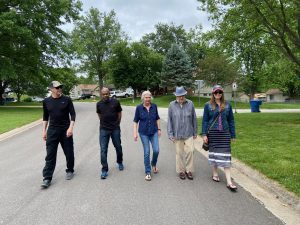 This immortal clip has been running through my head for Five. Full. Weeks. From my first shot, 36 hours after arriving in DC, to the second shot precisely three weeks later, to… today.

I’m vaccinated. I have achieved full potency. The MOST long-awaited day of many long-awaited days is almost here. Tomorrow I fly to see Dad, Kyna, Kyle and Ethelyn, and soon after we’ll have Tony and Lauren there too. We’re about to go ape-shit with hugging, screeching, squeezing each others’ hands, playing poker, trash talking and M*A*S*H talking, eating French Toast, playing Oh Hell and Cribbage and Lie, Cheat and Steal.

I hope I don’t cry. Mostly because my dad seems to take my tears on himself – but also because this is the definition of HAPPY TIMES. My regular readers will know I have not suffered greatly during COVID. I have been with Ramon, my sweetie:

…in beautiful Tunisia. If I had COVID, it was a light case. My nears and dears have made it through okay – with COVID, hospitalization, divorce, loss, and anxiety, but we’re okay. I was able to work, which suddenly seemed more of a blessing than I had ever thought. I even learned to cook and now love to cook.

Even so, I’ve become gradually more relieved and happy as these last two weeks have elapsed. I have felt the burden lifting. If you happen to be on the fence about the vaccine, let’s talk. I promise I’ll listen, and we can look for an answer together. There’s something so salutary about full potency. Or if you’re having trouble finding time, a babysitter, a place to get one… if I could help one person feel as good as I feel today, being as close to immune to COVID as I can be, I would be over the moon.

There’s only a few of us in this world that speak our language. It has weird words that only we know and has such an eye-rolling effect among us, it’s as if the eye roll were just a visual “word.” Our visits and trips as a group or sub-groups were regular and frequent, prior to COVID. So much so, that it was easy to miss how important they were to us. We don’t do much that’s special, there are few heart-to-heart talks, it’s mostly name-calling (completely in jest) and game-playing. Really, that’s about it. Even the eating is waaaaay in second place.

And then suddenly we didn’t have them. Right? That was not just us, that was The Whole World. We didn’t have the ones we always have, the ones we’re used to, the ones who speak our weird language (“familect“). When we might be able to have them was uncertain. We were powerless to do anything about it. I’m still undecided whether it was the uncertainty, the powerlessness, or the isolation that was so hard to bear.

The idea of going to see Dad and risking taking him the virus was repugnant. No one knew what was up next. Reports of re-infection, long cases of COVID, asymptomatics, mutations, juvenile cases, healthy as a horse cases, passing the virus to cats and dogs, and of course deaths… deaths… deaths. For months and months, we didn’t know a vaccine was really coming, and certainly not as soon as it did. We only knew that the phrases “two weeks”, “two more weeks”, “just a few more weeks” from the early days of the lockdown were a BIG FAT LIE.

My sister is a nurse practitioner, so lockdown was never lockdown. She’s fearless and just kept going to work day after day, mask after mask. My brother was building a cabin in the woods – probably one of your safer environments, since there’s no one around for miles and miles. My niece worked in a doctor’s office, which offset our “she’s young, she’ll be alright” so we probably net-worried about the same. Our “adopted” brother Tony had been an Uber driver – uh-oh – but found a new passion as a contact tracer. My dad and stepmom are in their 90s, so we just hoped and prayed they didn’t have to have contact with the world. And they did alright. We all did, eventually. We weathered it together, apart.

But it’s time to get together again, dammit, and I’m like a grasshopper on a hot plate with excitement.

Refreshed, rejuvenated, ready for life again. After ten days with the family, speaking our language, playing cards and talking trash, COOKING FOR THEM (!!!), visiting docs and other needed errands, I feel so much better. A lifted weight, an eased mind, a full-to-overflowing heart. I love dem, all of ’em.

First, the cards. My dad would balk if we brought large-format cards, but he had recently given up card playing because he could no longer see the cards. So I surprised the family with this deck:

Funniest of all, he does the same gestures with giganto cards that he does with regular hand-sized cards. I would give anything for a video of him hand-shuffling in his lap – a trick he uses to intimidate other players in the many tournaments he once played.

After these, the 5″X7″ deck we offered seemed almost normal to Dad. And – best of all – he can see them.

We also bought Braille cards – Dad’s eyesight isn’t going to get any easier. And we’re all going to learn so it’s a family thing. They’re really weird: the whole process just feels impossible. Until it doesn’t. I pulled the four eights (one from each suit) from the deck, figured out what 8 is, then what each suit is. Pretty soon I could identify the suits (if not always the number of the card.) I think we’ll get there.

We did a lot of walking around the neighborhood with Dad. Given his low vision he couldn’t do this on his own – but after this trip he is much stronger and with more cardio power. Also, the hats. The dude has style!

My sister, niece and I cooked for the family for the first time. If you read these blogs with any regularity, you know I spent the bulk of the lockdown cooking (and eating…) Also, my stepmom really didn’t want us to mess up her kitchen, or put stuff away where she couldn’t find it. (I get that.) Nevertheless, this time she relented – she still gets a kick out of cooking but not for a big group. So we got to debut some cooking for the whole fam – and I’d say “whooping success”.

And in another startling American Mid-West development, a robot was taking inventory at the grocery store: