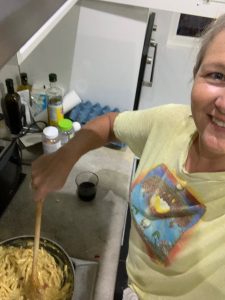 A bunch of years ago, my friends Liz and Andy held a Murder Mystery party, purportedly set on the Orient Express. We were all suspects of having killed someone and we had little cards saying how we would behave. Oh, I remember parties! With people! Those were the freakin’ days!

Anyway, to ensure the full evening’s experience, the mystery instructions came with recipes. I was in charge of making the Coq au Vin, which is CRAZY because at the time my cooking ability was limited to “chicken breasts with a cup of white wine and a can each of Cream of Mushroom and Cream of Celery, oven, bake.”

Not bad, but not very cheffy, either. For the Coq au vin, which incidentally includes mushrooms, white wine, chicken, and celery but is much nicer, I found myself standing over my very unimpressive two-burner studio apartment stove, with mushrooms and garlic gently sizzling in my only sauté pan. This was the first time I ever felt cheffy. And the only time, for years and years, afterward.

So what is cheffy?

Some things are cliche-cheffy, ur-cheffy, like crushing herbs in the hands to then toss them into a cooking pot. Or wafting the aromas from a dish toward you, and taking a big whiff. Any smelling or tasting of the food while it cooks is, inherently, cheffy. Remy looks totally cheffy here:

Since I’ve been cooking more I’ve come up with my own cheffy tasks. Feel free to add your own at the end!

Swipe left for my patented carbonara process, and swipe right to see the finished product. Please note the glass of red wine helping me work, as well as my smashing Aoxomoxoa t-shirt – I will MAKE THIS DISH for you if you know what that is.

What are your cheffy moments?

Perhaps not so cheffy but necessary nonetheless

On a Saturday afternoon in August with temps well into the 90s and going nowhere but up for the coming ten days… is NOT when you want your aircon to zitz out. But that’s what happened to us last weekend. There were popping sounds, there were burning smells, there was the arrival of the obligatory “guys with tools who nevertheless can’t find their butt with an oven mitt.” They came by, stood around, turned things off and on, and repeated their questions and judgements as if that, alone, would hook things back up again. While they did this the refrigerator started to jiggle and rattle like it was beat-boxing. (See next week’s post for key information on why I know what this would sound like.)

All of this is connected, gentlemen. I know my French is sub-par, but it was unnerving how many times I’d say something in clear, simple French – like “The fridge is bouncing and rattling” or “I smell burning paper coming from the A/C vent”, only to have them walk around me, look and smell and open and shut and test, and then say something really brilliant like, “There’s something wrong with the fridge, too,” or “Hey, that smells like burning paper.”

The best moment came during the Testing Phase, when they were shutting off given circuits in the circuit breaker box and then going around the house to see what turned off. (Not that this was even moderately helpful – I think it’s just what they knew how to do, so they did it. On Saturday you can’t be too picky about the team you get.)

Side note, with photo

They did NOT label the circuits in the circuit breaker box as they painstakingly identified them – thus ensuring another round of this same game at some uncertain future time. My brother would be appalled:

At left the wires in my mom’s circuit breaker box before Kyle got ahold of them. Swipe right for the after. The boy can tidy. You can’t see it there but all those little fellas are perfectly labeled with what plugs they cover, too.

Meanwhile, back at the ranch…

These guys couldn’t buckle my brother’s tool belt. At one point I found them looking distressed in the kitchen, as if thwarted by an unmovable force. Does the oven work? they asked me. Well, there’s really only one way to tell. But they were, all three of them, standing far enough from the oven, in an awkward semicircle, to ensure that neither they nor the oven could pass coronavirus germs to each other.

They didn’t know how to turn on the oven and absolutely did not want to try.

I guess that made me feel cheffy? That I knew how to make the oven heat up? It’s not like warming up the Space Shuttle, for pity’s sake. But they looked like they were being required to give a woman an orgasm or something. Come on, dudes! Man up! Grow a pair! Turn on the oven! Did they think they’d look effeminate in front of the others if they reached over, pressed the dial, and saw the tiny light come on?

I would argue that a much more emasculating activity was just wandering around the house turning things on and off for no reason, but that’s just me. Am I being a bit bitchy? Well, yeah – that sometimes happens when the simple lack of a penis makes all your speech inaudible and your logic dismissable. When My Time comes and I’ve got to leave this earthly garden, I think I’ll want those two hours back, the ones that gave us no more information (but some more burning and danger) than we had at the outset, punctuated by these mooyuks being afraid to touch the womanly appliance of an oven!

Three new dishes this week! After the refrigerator started behaving so weirdly (above) I remembered I had once promised myself to defrost the freezer. Instead, I’ve gone on stuffing it with… stuff, while the ice does its damnedest to crowd me out completely. So I’m using up what’s in the freezer (none of it very old – I’ve only been cooking a few months) in preparation for a fridge clean-out day.

And that’s good fortune, not because there’s anything particularly great in there, but because some of the stuff I pulled out happened to coincide with some recipes in my go-to website (NYTimes Cooking, which costs $40 a year but has been a big help. They’ve got a lot of basics on there, like proper chicken poaching or how to make pizza dough.)

So here’s what came of it. First, a seriously moldy oldy, straight outta the elementary school cafeteria… Sloppy Joes!

That picture’s not all that attractive, actually, and nothing particularly cheffy about it. (Though it was delicious.)

So I’m just going to bust out the next one, which has not been seen in a school lunch cafeteria in this hemisphere, ever: Chicken bulgogi in lettuce wraps, with a very cheffy late-recipe drizzling of sesame oil:

Oh yeah – we have AVOCADOS! THERE IS JOY!

Hard to beat that one. But tonight was yummy too and had lots of cheffy moments, like toasting dried peppers to make the necessary chile oil; the timely application of food processor blades; folding in bits of beautiful cilantro, and frying little strips of shallot. 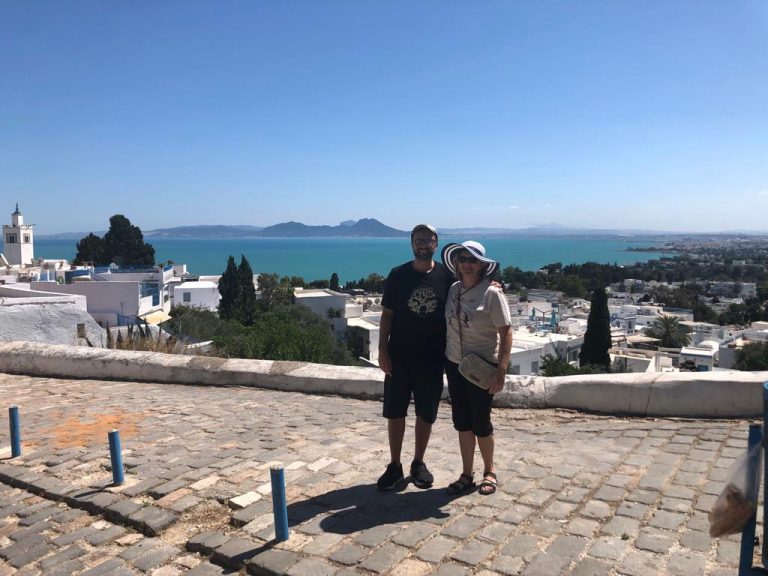 I’ve been cooking since I could stand on a stool (thanks, Mom), but the first time I remember feeling “cheffy” was actually courtesy of David, believe it or not, way back in . . . 1991? when he showed me how to smash a clove of garlic with the flat of the knife blade to make the skin easier to slide off. It was life-changing! Also – AXOMOXOA SHIRT <3 (it looks smashing on you).

I figured I’d owe you this meal!!! Since you gave me the Aoxomoxoa shirt!!! :>:> And I’m happy to hear of the good memory of David – he was good at that cheffy stuff. I learned how to leave the tip of my blade on the cutting board from him, especially with herbs, and to crook my knuckle toward the blade so as not to cut myself. He also put frozen peas and tuna in Kraft Mac and Cheese, which was a good hack.

It’s the ‘We ate the acid’ shirt! A classic! Ok, maybe you had to have actually ingested the acid to see it, and maybe I did, maybe I didn’t. But I could always almost see it! (Line up the ‘ate’ in that phrase with the ‘ate’ in ‘Grateful” as it’s printed on the shirt and you too will be always almost able to see it!

A Few More Cheffy things:
1. Calling yourself a cook, not a chef, (and never a cookie!) no matter how long you have been cooking. Humility becomes us!
2. Being able to sharpen/hone a knife. Bonus points for being able to do that with a variety of implements ie a steel, a stone, the bottom of a plate, a grinder’s wheel, another knife. The more implements you can hone a knife with the more bonus points you get!
3. Dicing one or more onions without stopping no matter how much you’re crying, even if you have to close your eyes. There *IS* crying in the kitchen but it doesn’t slow us down, not one iota!
4. Knowing kitchen math inside out, forward and backward. ie How many TB in a cup, tsp in a TB, cups in a gallon, pint, quart…and so on and so forth. Although if you are REALLY cheffing things, you’re throwing in a bit of this, a bit of that, a splash of that and a handful of this…and it’s always the perfect amount! ( a la Remy above!)
5. Having anyone, anywhere ask you how to anything about cooking, or throwing any compliment your way regarding something you have cooked!
6. Most of all…putting together a dish you’re proud of, and truly enjoying the process!

PS ALL your dishes look great! Even the moldy oldie!
PPS Is a mooyuk similar to a mishdoob?

Jab, these are amazing!!! I do like the knife sharpening one especially, because you suddenly realize it’s actually important once you start cooking! During the strict part of our lockdown I sharpened a knife (via a web video) on the bottom of a porcelain coffee cup. But today I admit I outsourced – I think the folks who I now know sharpen knives are way better than me! But I’ve got to get better at the measurements…

Mishdoob is a new one for me. Mooyuk comes from Cliff Clavin on Cheers, to with, “There are no Jews in Borneo, you mooyuk!”

KERI! I thought that was my shirt, but then I thought maybe I was misremembering (or hallucinating). I’m glad to know it’s still with you and looking good!

I wear my onion goggles to chop onions, so I guess I will never be a true chef. 😉 I like Jab’s #5 especially. It always feels good to be asked about cooking. I imagine you’re feeling more of that, my dear! xo