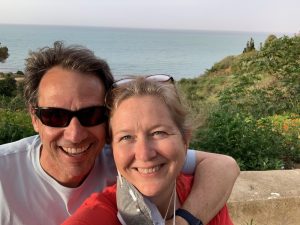 Still pulling out these letters, that feel old and creaky even though they’re not long ago. I’m fascinated by how my perspective changes and I don’t even notice it. As cases start to rise again in mid- to late-July, Ramon is safely home from Madrid – and Spain is re-classified at an Orange level of danger. Cases are popping up around us here – ten at the airport, bunches in different parts of Tunisia. Ah, crap, I’m scared again.

But the month ends on a joyful note. A new eight-pound relative!

To a friend/colleague I used to love coming home from work travel and seeing Ramon after time away. Alone time is so valuable, and so rare. (When he goes for a run, I scootch out to the living room and take command of the remote, even if he’s only going to be gone a half hour!)

July 2 (from among my Damn Trump series of letters)

To my cousin I think my dad is going stir-crazy but it’s no time to lift restrictions now. Missouri’s numbers are not growing as fast as other parts of the country, but too fast for comfort. Damn Trump! Damn his gutting the systems that would have made a difference before this began, and damn his campaign-centric and inflammatory responses that caused another spike!

To the Lambert Airport friend, quoting something she wrote to me “Faith is being sure of the things we hope for.” That is poignant. I hope I see my mom in the next life. I hope people are basically good, like Anne Frank wrote. That one gets tested – but I’ve got a nugget of optimism, an ember that has never gone out. Reading helps too – because goodness is, in part, imagination. Hope certainly is.

To an American friend I met in Rome, who shared summer tales

The best things about summer are:

And the worst thing about summer is:

What I would love is if they tested me and said, “Hey, you know, you’ve got the antibodies! You must have had it without symptoms.” Because I like getting good things the easy way.

To the Lambert Airport friend People share lots of stuff in interviews, even personal things, even when we’re talking about something mundane. It’s happening in polls right now. People are more bored/lonely/anxious and prone to answer phone surveys, prone to stay on the call longer. Many people have never been interviewed, and appreciate being listened to. I taught myself to take a breath and just listen when they seem to be off on a tangent. I can’t let it go on indefinitely but if I let them get out a few stories, maybe I will ease their burden a bit. Loneliness is a bear.

To a friend in Minneapolis, the one who cooks I’ve sent a list of stuff for Ramon to bring back from Madrid – nutritional yeast, a lemon squeezer, cheesecloth, nutritional yeast and red pepper flakes, vanilla paste, dry gnocchi, plastic zipper freezer bags that you don’t throw away, a cooking thermometer and scale, a scrapey thing for getting dough off the counter… Also Benadryl, face cream, chewable mulitvitamins, Benadryl, Tom’s toothpaste, a webcam, a mouse pad, leg waxing strips. See what I mean about his suitcase being FULL?

To my stepsister, a newly minted grandma The little tyke is cute as a bug. Ramon insists Kacey is ‘glowing’. (I thought she looked a bit exhausted and maybe panic-stricken, but it’s possible both of us are projecting.) We’re so happy for you all and sending lots of love!

If you’ve read this far, you might also enjoy more posts of letters, for March, April, May, and June 2020, chronicling life and coronavirus and politics and relationships and, again, life.