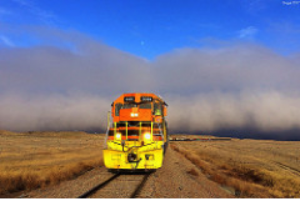 Please see the lovely photo which inspired this piece, Kyle 3099 on Genoa Hill From High Plains Hogger on Flicker

The conductor, Kyle 3099 according to his embroidered nametag, slept peacefully on the cabin floor. “Sleeping peacefully,” in this context, meant “knocked out with a socket wrench.” Kyle was going to have a throbbin’ noggin tomorrow.

Gemma was mumbling, “…his own fault,” as she kicked the socket wrench on the floor beside her. She wouldn’t need it: this was a freight train and the only other life on board was the cattle they were delivering to Wyoming. “Why wouldn’t he listen? These Trumpet bastards, man… if I’da had a penis, he’da listened.”

Gemma leaned out the open window to see the wall of chemcloud approaching. So far she was winning the race. It helped that the train was pushing uphill at nearly 10% grade. But the engines weren’t built for this demand. Another five minutes, max, and then the train would peter out.

She sighed and weighed options. Decoupling cars wouldn’t work. They were going too fast to do it safely, and of course there were all the cows. She’d consign hundreds of them to death with that option. Mind, they’d probably die anyway.

Gemma thought about stoking in a turbo chemical that would speed up the train, giving her a few more minutes’ lead. Also suboptimal, since the stoking chemical would leave the engine as smoke, to adhere to the pursuing cloud. The turbostoke was catalytic – it would probably make the cloud bigger and stronger.

She could stop and let the cloud roll over the train, but as she didn’t know how big it was, she had no idea whether she and the bovine contingent would survive. If the cloud were small and passed quickly, they’d make it. But there was no way of knowing. These chemclouds had been blowing over the Great Plains ever since the 2021 dust bowl, brought on by unregulated agro chemicals searing the topsoil and sending it airborne. The clouds were unpredictable – unknowable, really – because the National Weather Service had had to pretend they didn’t exist.

To protect costly cargo, trains had been upgraded as part of the Infrastructure Development Initiative to have a failsafe – a set of wheels at the ready in case of derailment. She could use them now, jump the track and try to escape the cloud. But they were going uphill. On wheels, their forward momentum would evaporate, bringing the cloud on them that much faster.

Kyle stirred beside her and she considered that having help might be worth letting him wake up. Methane, she suddenly thought. “Methane!” she yelled at the inert object on the ground. Kyle stirred more, and raised his head but grabbed it from behind, where the socket indentation would be.

“What the hell…” Kyle groaned.

“You hit me!” was all he managed to answer, but at least he was standing now.

“There are gas escapes on top of each of the cars, for the methane. You know, cows?”

Kyle didn’t answer but he did stare at the socket wrench, well out of his reach.

“Listen, we’ve got one chance exactly, and very little time. Follow my instructions.”

“You knocked hell outta me and now…”

“I said, listen!” Gemma picked up the socket wrench and Kyle ducked. “You stay here giving it 85, 90%.” She grabbed his wrist and lifted up his watch. “When we hit 3:15, and the second-hand is on the twelve, put the hammer down.”

“We’re not in danger,” Kyle whined. “If we were the government woulda told us. That cloud is safe, healthy even…”

Gemma shook her head and sneered. “Fine, do what you want. Stop the train, speed it up, run it off the rails. I’m going out back on the cars. You might want to watch, it could be fun.”

Before Kyle could say or do anything, Gemma was out the back door of the cabin, wielding the cabin’s fire hose and climbing atop the first car. She cut a small slit in the hose with her Swiss Army knife and threaded the hose through the horizontal methane release valve. It was a snug fit, and when the slit reached the junction, she felt the hose inflate. Cow farts. A force to be reckoned with, she thought to herself. She repeated this at the tail ends of the next three cars. The hose became more and more taut and rigid and though it wasn’t heavy, it was awkward as hell.

At the end of the fourth, when the hose was about to run out of length, she felt the first stinging droplets from the cloud. Kyle 3099 poked his head up out of the engine cabin and gasped as the chemcloud seared away her hair. It just fizzled on her head and was gone. Gemma felt the stinging particles on her scalp – an absolute cold, cold enough to burn. Kyle watched Gemma’s uniform turn brown, then black, then shred and loop into the sky in swatches.

She attached the fourth car’s junction and had ten feet of hose left. Her skin was being roasted micron by micron, but this was the last, best and only chance the train had. She didn’t care whether Kyle survived the day, but the cows didn’t need to die. She kneeled, braced herself against the metal, and flipped the hose open, spraying pressurized methane into the cloud above her.

Gemma could taste the chemcloud’s particles on her tongue, but the methane spray smelled even more toxic. It shot in waves of a neon blue-green, contrasting with the gray-brown above, the cloud that was once rich, black earth. The edges of the cloud started to curl upward, and the cloud itself was fracturing with threads of light. It was working! “C’mon cows!” she yelled, oblivious to pain, pressure, wind and stink.

The cloud receded and shrunk, crackling and shooting sparks, a dark patch drifting against the bright blue sky. The train slowed its march, and Gemma heard Kyle’s whimpering from the front of the train. She’d live to fight again, and the damn cows too. The world was going to hell, but just for the moment, she felt good.

What I did on my summer vacation - Keri Culver

[…] Runaway: a toxic cloud chases a fearless train conductor across the high plains. […]