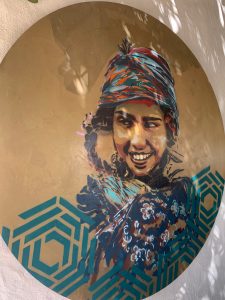 It is not so easy to get to Djerba! I mean, you can fly if you want… but that would be too simple. Imagine a camel caravan, or for that matter even crazy long day in a rental car, not finding a gas station for a frighteningly long time, then crossing a ferry behind a truck full of sheep headed to a date with Eid…

Djerba has been a pilgrim’s destination for over two millennia. Wikipedia tells the whole story better, but imagine at least this much: in 586 b.c., when Nebuchadnezzar razed Solomon’s temple in Jerusalem, a group of Jews escaped – to Djerba. They were called the Kohanim and had worked in the temple. They brought a door from the temple and used it to build El Ghriba Synagogue.

Pro tip: Don’t trust Google Maps to get you there. We did, and ended up on a goat trail that led to the (well-guarded) rear wall of the compound. It’s not hard to find, compared to some of our other destinations on this trip – and there were tour buses pulling up, making it one of the most populated sites we visited too.

There were two halls inside the synagogue, the first more ample and with taller ceilings, all done up with tiles and stained glass. There were repeating star patterns in the tiles but, I was surprised to see, none with six-pointed stars. All the stars in the tiles had eight or sixteen points. I don’t know if that matters, architecturally or timeline-wise, but then I don’t know anything about Jewish iconography, either.

Then there was a smaller, more intimate space outfitted for rituals. Hundreds of pieces of flattened tin stamped with Hebrew letters hung on the walls, below ornate chandeliers and ceiling medallions, and there were canopies around a central apse of some sort, and just a profusion of color. A guide was giving a tour in English but he didn’t give much more information than what you can read in the photo below, about the establishment of the synagogue.

If you go, remember not to wear shorts or tank tops, and to bring a head covering. They have some there, too, for the inevitable Western tourists who are practically naked by local standards!

After marveling at El Ghriba, we went onward to Djerbahood. When Ramon and I were pretty new to Tunisia, but established enough to have a coffee table, Ramon bought me a coffee table book:

In 2014, street artists from all over the world came to Djerba, an island off the coast, to decorate this town’s white plaster with every manner of mural and appliqué and stencil and sculptures… in short, all the best guerrilla or street art you can imagine, in one small island town, in an event called Djerbahood. Ever since living in Bogota and taking a tour of graffiti given by the artists themselves, I’ve been keeping my eye on street art. So I have been waiting to come to Djerba almost as long as I’ve been in Tunis.

I didn’t know if we’d be able to find the neighborhood with the murals, or if they’d even still exist. I was hoping I wasn’t leading Ali into a long, hot, unrewarding walk through unshaded streets under the punishing sun. Turns out there was not much risk of missing the artwork. In fact, in April, 2022, artists returned for another round of painting. Based on the website, I’m putting in as many artists’ names as I can find, and tagging them in the blog. I hope they see how much we loved their work!

Even the unrelenting sun didn’t stop us. Around every corner was another scene, another artist, sometimes work by artists we’d seen earlier in the walk, other times completely unfamiliar styles. There is a Djerbahood website and video and it was clear we didn’t see even the half of it! There are over 200 works of art!

My insufficient attempt to share all this with you

Since seeing the website, I’ve realized how meager my Djerbahood photo collection is, but I’m going to do my best to share it, with the hope I can do right by the artists. I also hope some intrepid travelers will want to come and visit Djerba, and Tunisia all around! Djerba itself is quite far off the beaten path and all the more special because of it. And you won’t see such a collection of outside art anywhere.

There were loads of styles and subjects – photorealist, color blockers, black and white stencilers, the ones with writing in Arabic, the geometric ones, portraits, still lifes, but also pottery, sculpture, and little signatures repeated on different blocks, especially above and below eye level:

I loved the repeats: it made me feel like I was in with the cool kids:

It just keeps going, and you never know what you’re going to see next. Even in that heat, I couldn’t get enough.

Here’s a selection of black-and-white (and gray) murals and one in forged iron:

And another selection, this one of animals:

And here’s a bunch of murals of people:

These are a few still lifes and geometric ones:

The town itself is adorable, with little coffee shops and boutiques, and of course cats, all set against the sea, where we spent an afternoon relaxing after seeing all this gorgeousness. We needed a little time floating in the Med to soak it all in…

Till next time! There’s still more to see from our trip… 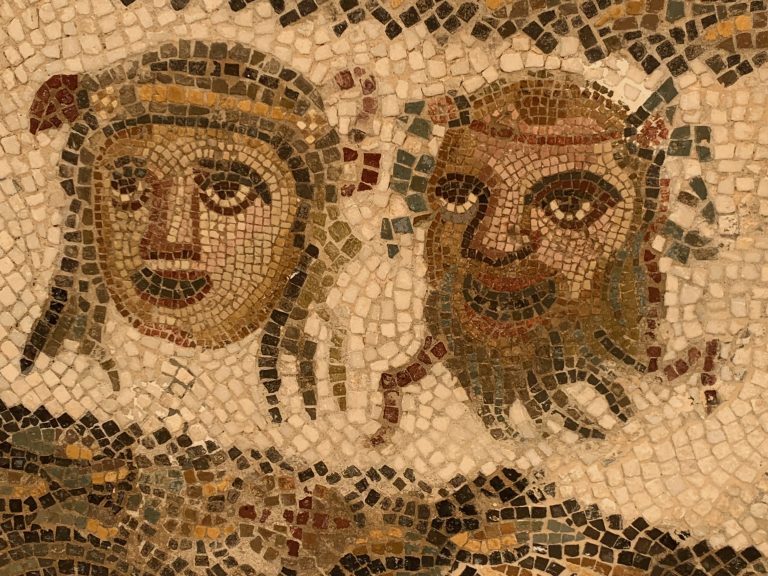 THANKS SO MUCH for these glorious photos! I love love love Djerba and am looking forward to returning there soon. I am so glad for you that you loved your time there as well. Best wishes to you and Ramon.

Of all your posts, Keri, this is easily one of my favorites! Art is necessary. And to be where it is so prevalent, and outdoors no less (also necessary) well that’s just idyllic, and I am envious. Thank you for going and sharing!
Jab