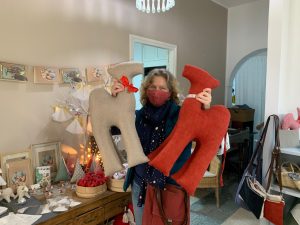 Ever since I’ve been traveling out of Tunisia’s airport I’ve been buying and gifting these stuffed camels. I love ’em – they’re simple and cute and very inexpensive. Turns out there’s a store and workshop (ahem, atelier) where they’re sold and made just about ten minutes’ drive from my apartment! The owners are friends of my friend, who took me there to look for Christmas stockings. I was surprised to find myself at the home of the lovely wee camels I’ve been taking all over the world, and some versions that are even fancier and more color-coordinated than the ones I buy at the airport.

Siroko’s facebook page is right here. I have pictures and stories of handing these things out in Nairobi, Mombasa, Dar Es Salaam, Kigali, Kampala, Dhaka, Amman, Rome, Oxford, Madrid, Washington DC, and St. Louis, and once I start traveling again I’m going to keep taking them ever further afield.

Tunisia is home to camels, yes, it is

Of course they inhabit the south, the desert, where the first Star Wars movie was filmed – we’re much too temperate here in the capital. But that doesn’t mean I haven’t met a few of these… lovelies in town, one of whom should learn to close her mouth while eating.

Which, before you give me any well-earned grief, are actually dromedaries – one hump – rather than camels – two humps. I know, but the word “dromedary” in French is dromedaire. Nice enough, a little guttural flair at the end. But the word for “camel” is chameau – which, you have to admit, is far lovelier. So I’m probably gonna keep calling them chameaux as long as I live in Tunisia, and maybe even after that. Accuracy be damned.

I was pleased to see the other animals they make besides the drom-chams, including these precious giraffes (simply girafe in French, but captivatingly close to girofle, which is clove. I make no claims as to why that might be.)

They made our Christmas stockings to order, with only a day to spare till Xmas. Their workshop is right in their sales shop!

We stuffed ours and opened ’em a few days after Christmas, when the stuff came from Manchester. Ramon’s light blue t-shirt arrived but his nubbly socks from Barbour did not – we’ll have to figure that out. But we had Lifesavers rolls and an orange stuffed down in the toe, a la the Culvers, circa 1975; chocolates; corn nuts (a recent find at the spice shop here); underwear (also a Mom favorite); and CANDY CANES because if not that, then what are we doing here?