Because I know you missed it 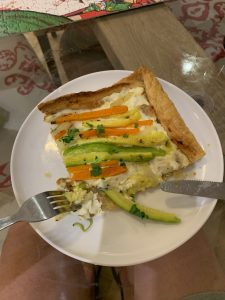 It’s time to show some exciting kitchen adventures. I could use the break from thinking about politics, which is as disgustingly craven and self-serving as it has always been, plus Trump. (Yo, Semite??? I used to think it was at least less awful when he read from a script…) So, yeah, pretty bad.

Let’s get to the food.

Let’s start with the prettiest. Okay, it’s not that pretty, but WOW – it had so much flavor. I mixed in turnips and zucchini because I’m not a big carrot fan, all else equal. But this tasted so delicious and was so filling and pretty healthy at the same time. And it turns out the humble turnip is just lovely.

I still haven’t tried my own pastry dough. This comes in a packet and I just roll it out. I’ve watched the Great British Bake-off until the characters are etched on my tv screen and I can’t stop saying, “Off you pop!” to Ramon, but there are just too many ways I could screw that up. Not least of which is the temperature of my kitchen these days. Blech. August does not rock. It melts.

My first attempt at scones was also a big success. Especially for me, since I ate literally 23 of the 24 I made. Ramon ate one when he returned from Madrid, shouting its praises, then never touched one again. Sometimes I think he is just being nice.

At least I spread them out over about four weeks, by freezing half. But still, yeah, I ate ’em all.

And I ate all this stuff too!

My loyal readers already know that sliced sandwich bread is not a thing in Tunisia, so if you want French toast or a grilled cheese or Mom’s egg sandwich, it’s DIY. This is my third time making this bread and it’s good, but pretty bland. I’ve taken to sprinkling a little salt on it at breakfast – otherwise it’s a bit insipid. Taking suggestions for better sandwich bread recipes – but from what I’ve seen online, the ingredients I’d need to spice this up a bit aren’t widely available here, if at all. Oh well. Still makes a helluva plate of French toast.

For those of you wondering – how did she get bacon in Tunisia? Well, it’s just there, in a few places, not consistently but often enough to make me swing by a second or third store while out on my rounds. I guess I could be working on my novels and short stories instead of walking around La Marsa with my shopping bags, looking for bacon, but lately cooking has held my attention more.

This is apricot raspberry lime sorbet – but I think I overdid it on the fruit. Maybe it just needs a bit of crushed ice. As it stands it’s pretty overwhelming. Still, I liked the raspberries in there. And it’s always good to try to make something new.

So that weird dessert gave birth to this one, more subtle and lovely – lemon cream with basil, and I threw in raspberries for the sake of comparison. They’re supposed to be pops – so next time I get to a big megastore I’ll look for the molds. Next will be no-churn ice-cream, but I need cream cheese first.

This slide show goes through a few repeated favorites, and one new one – basil pesto. My little indoor garden was a-burstin’, and I’d just watched Samin Nosrat’s show Salt, Fat, Acid Heat where a little Italian lady makes pesto with a mortar and pestle, so I gave it a go. Modern style, natch. My little stick blender made it through just fine.

Also peach cobbler – that cobbler recipe is so freaking easy – and hummus, moutable, beet drip and spinach-artichoke; a rockin’ quiche with spinach and ricotta; the famous malfatti; roast chicken and chicken stock; anf the rajma red beans, using cranberry or borlotti beans that I’d never seen before we moved here.

Quick non-culinary aside: I finished watching Money Heist at about 4:00 a.m. one morning. The only time I’m up at 4:00 a.m. is when there is a particularly nasty bout of travel afoot. But Money Heist has been soooooo compelling – not least because I am finally rectifying my Spanish slang deficit. (It’s also available in English, and has been Netflix’s most-watched non-English show ever. “Season 4 of Money Heist managed to rack up an incredible 65 million views.”)

Has anyone else watched it? (Don’t worry, NO SPOILERS here) It seems to tick the writerly boxes – all the characters are flawed and wrong, with scary pasts and questionable tactics – both the cops and the robbers. Still, the crowds of Spanish every-men and every-women are rooting for the underdog heisters to triumph.

There’s also this messed-up quality that is so much like life. Plots aren’t straight arrows shot through; they’re multi-threaded, incoherent things. The characters drop – sometimes from their own stupidity – out of the frying pan and into the hell-flames. If they get tied up nicely into a bow, it’s only at the end. Even better, never.

When is Season 5 coming???? Annnywayyyy…

Let’s talk new – this is my first attempt at Korean bibimbap. It is not very good. There’s fast-pickled cabbage, which is fine but it ain’t kimchee. THe cukes and pickled onions were nice, as was the Swiss chard, on their own, anyway. The sweet potatoes – I’m not sure where that idea came from, except that I had them. But they were too sweet for the dish. The egg, lovely, because Ramon cooked it and he’s great at that.

But no sauce – and I wouldn’t even know where to begin so I better do some research on a recipe. This had nice bones but no oomph!

Another new dish is on the left – a lemon cuke yogurt salad with hot chili oil. I made the chicken kabobs again – nice marinade that smells like feet. The hot chili oil was possible because one of the (many) things I asked Ramon to bring back from Spain was this:

That’s right, the big bottle. It has already improved my cooking eleven-fold.

This carbonara with radishes and homemade strozzapretti (“Choke the priest”) pasta is on its third visit to our table. Now, in August, I admit it’s a bit heavy. But I am glad to get the technique down, because it rocks. Little chunks of radishes are the stars. We eat it till it’s gone.

Last but not least, an old favorite with a new old recipe: Mom’s snickerdoodles.