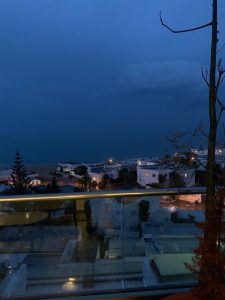 I CAN’T SLEEP. I’m HOT, but last night when I opened the window a *&%^$ mosquito came in and bit me three times. That’s as unconducive to sleep as being hot. So I closed the window, dimmed the lights, and laid in wait. Of course it appeared – I still had blood it could suck. I squashed it while sneering, “Die, you little vampire menace!” Ramon was nonplussed.

Then I went back to not sleeping anyway. And I woke up too early too. WHAT THE HELL? It’s giving me both a stiff neck and weird dreams.

Still, I’m eating well. This quiche was so monster good we ate it in two meals. Yes, ma’am/sir, that’s a quarter of a quiche at a time. But it was so freaking good – the yellow cherry tomatoes were not quite ripe and so made it acidic; the cheese was especially good; and the crust was flakier than normal. I got a different brand of prepared crust.

But the quiche pales in comparison to my latest experiment: making pretzels. The secret is 20-30 seconds in a boiling pan of water and baking soda. They come out of the water looking bagelly, then they go in the oven.

Apropos of nothing, there’s this guy, carrying a fish down the street by its mouth. In his flip flops and Ronaldo t-shirt. Literally in the middle of the road.

My friends’ cat Shadi was not pleased about her image being used in yesterday’s post without her permission. She gave me this look:

Another cat felt hurt when I left her out of the cat parade yesterday. But, she’s shy. So this was the best I could do for her. It looks like she might actually be Shadi, which is a little Jenna Maroney-ish if you ask me.

What’s not to be grateful for today?

… Doesn’t mean I’m not worried about my work petering out, my sister going to work at a clinic every day, or my strange sleeplessness. But I’m still grateful for the good stuff.