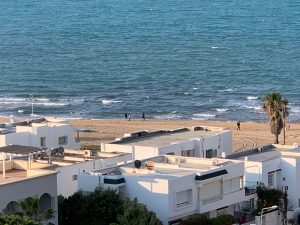 Welcome to mood swing central! A nice long talk with Dad just now has made me feel fine, following a harrowing post-grocery-store hand washing frenzy that threatened to overload the municipal water system. That’s an exaggeration of the external effect but MAN – today I was so AGITATED for some reason!

Anyway, I got plenty of yogurt to be able to make a dip tomorrow to go with all these potatoes we have. I’m going to make some sort of french fry – whether fried or baked or some kind of combination, I’ve yet to determine. I’ll search up a good recipe for something crispy.

Still no flour at the stores. A big supermarket says they have it but they’re only doing deliveries and I can’t get a slot! I wish I had used them earlier – then I might have racked up some points with the chain. For now, no baking. I’m down to about half of one of these:

So where are the bakeries getting it? Because there’s one across the street from us that is pumping out baked goods, and five more down the street on the way to the ONE we really like a mile away. All open, all busy, all with lines of people carting out lines of bread.

WHERE IS THE DAMNED FLOUR???

The wait time to get into the grocery store today was quite long – and the line spooled out through the parking lot, which is enervating because cars want to pull in and park on the spots closest to the door – where we are standing 6′ apart and trying to be distant from one another. I really wanted to punch a Land Rover driver. He got out and tried to cut the line while he snapped on his dishwashing gloves, masked pulled down below his nose. IDIOT. We did not let him in.

Not an isolated incident

I’m so prickly these past few days – physically edgy and wondering if I’ve got A Symptom. (I don’t.) If and when Ramon can wheedle close enough to me, I totally relax once he’s hugging me, or when we’re fake-dancing through the hallways. It’s hard to be panicked when your squeeze is humming Despacito and dancing a waltz.

I wasn’t up early enough today to appreciate a cold mist that apparently flooded our neighborhood. The rest of the day is and has been and promises to be sunny – but I’m not ready for summer yet. Neither is the city – people can barely keep themselves from the beach, with handfuls sprinkled about there most of the day. They need to, I get it – especially the ones who come with dogs, or children, or dogs and children. Not getting them out of the house for a break would also be dangerous. But I’m afraid that as the weather gets warmer, the beach is going to get full – and that would be disastrous right now.

Tunis currently has 24 deaths and over 600 cases.

The growth rate has been the same as elsewhere but the absolute numbers remain low. They started very soon to implement restrictions. Even in the end of January they were already sending people back on their flights if they arrived at the airport with a fever. Since March 1st restrictions have been tighter and tighter, and with good reason. Though the country is known for its strong medical system compared to others in the region, it would be hard-pressed to handle the type of system overload Italy has had, or New York. My Tunisian friend sent me this discussion of a model we wouldn’t want to see happen. (I’m afraid to read it yet, but at the same time so relieved to have something in English to read about Tunisia.)

We had that crazy pink moon last night. Ramon missed it, but I took some very crappy pictures to share.

The way it looks, it might well have caused this morning’s mist…