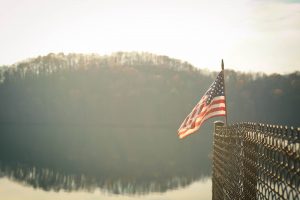 How does seeing the U.S. flag make you feel? When it’s flying? When it’s draped over a coffin of someone who put themselves in the line of fire? I travel and live all over the world, I’m a pro-peace lefty who likes the idea of socialized medicine, and I think Trump is a pus-filled boil on the dirty underside of our country. But I sure get a lump in my throat about the flag. About selfless sacrifices, about Lincoln, about the melting pot/salad bowl: we’re all in this together. For me America is a beautiful experiment, though we have a long way to go to before real life matches the rhetoric.

I have argued with my dad, a staunch Republican, since I started putting my own sentences together. I can argue with him and I usually learn something. He has learned a lot from me over the years, too. Our arguments have made us better. That’s because I can believe that he is wrong, and that the way he wants the government to do things is wrong, all the while knowing that our different perspectives are driven by different but valuable goals: He wants limits on government spending, and for people to have incentives to be their best. I want government to lift families out of poverty and help people get trained up for the new economy; to get women safely out of abusive homes; to ensure compliance with the ADA; to provide health care. We’ll figure out the costs, but if we don’t take care of people, we’ll have failed. Dad thinks that’s nuts.

Our kind of argument is not the apocalypse. It’s a deep disagreement, but we can come to a compromise where we don’t go broke as a country but we take some money out of defense spending to cover quality accessible child care. F’r instance.

Those days are gone, though, aren’t they? Did they die when Trump was elected or since? Or was it @MoscowMitch McHypocrite, long before the Orange Asterisk was sworn in? I don’t know, but if you’re a Party of Lincoln Voter, don’t give up reading now. Lots of you are Never Trumpers, like my dad. This is the important part. You’ll like this part.

Conservatives who defend the Constitution and seek sensible limits on spending, who want to preserve the good in our country and who are proud of our soldiers, are not the enemy. We can talk to each other, even if we know each others’ tropes and don’t necessarily like them: we’re from the same team. We believe in the imperfect but still, arguably, great leap of faith to establish a country “of the people, by the people, for the people.“

Then there are those who shred logic (and maps) to gerrymander their way to political ascendance.

“Party of Lincoln” voter, if you’re not quite ready to give up your proud claim to supporting the Constitution and loving our country, pay attention, please.

Cheating your way onto the playing field

The deceased gerrymandering guru‘s words are repugnant – if you’re committed to democracy. If, instead, you’re committed to the primacy of party, this is glorious good news: better and more invisible ways to ensure election outcomes that favor your team even when your team is smaller, can’t get out the vote, or demands allegiance to 18th-century “values” in exchange for a discount on your income tax.

There’s a new font of gerrymandered districts – get your head behind that. There’s a B, and a G, an X, a Q, a W, etc.

America means something – doesn’t it?

If nothing is more important than the money game, not the swiftly tilting planet, not human rights, not international relations, not health care, not taking care of our elderly or our kids who were born (through no fault of their own I hate to have to add) into poverty, not women’s right to choose, nothing, not even the rule of one person = one vote that our country has fought so hard for, then there is no salvation. That’s the end of the American experiment, brought on by the crowd at the top of today’s Republican hierarchy.

I’m not ready to give up what America means, what black and brown and white Americans, women and men, non-binary people, people on crutches or in wheelchairs, people who were shunted to reservations, people who cared about the environment and about the rights of animals, have made it mean.

The dream of America is why the bricks flew at Stonewall; why people sat at lunch counters and faced snarling dogs and firehoses in the South; why the Dakota pipeline protests stirred something for all of us; it’s why activists have painstakingly and thanklessly toiled entire lives to pass a bill for the equality of someone who was cruelly excluded from the original (white male landowner) American story.

There are neutral ways to decide where district lines should lie – we’ve got brilliant American minds coming up with algorithms for Facebook, but one or two have dedicated their efforts to this crucial feature of democracy. Should voting districts look like the top picture or the bottom picture below?

Should partisan politicians be cherry-picking who will vote for them in the next election, or should they be impartial? We know the simple three-word answer: Conflict of Interest. It’s like someone climbing up in the treehouse and then pulling the ladder up behind them. You’re on the ground: what do you think of your buddy up there, hoarding the views and the privacy, the Nancy Drew collection and the beef jerky?

But that’s not what the Supreme Court has said. They’ve said, Go Ahead, partisan politicians at state level. Knock yerselves out.

If you ask someone in Normal or Eureka or San Antonio or Gary or Walla Walla or Mobile or San Francisco what democracy is, this is what they say:

We’re all created equal. Americans take those words from our collective history and expand them to their full meaning: the real we, the real all, the real equal.

That we have a say in who governs us, that we are individuals but that our political experiment in democracy means something and is worth protecting. That we’re an example of what can be achieved to oppressed people elsewhere.

Did the first responders pick white male landowners to save first when they went into the World Trade Center and the Pentagon? Do the helicopters racing to out-of-control forest fires drop water only on Republican neighborhoods? Do the soldiers who go to war for “mom and apple pie” dedicate their fighting only to June Cleaver? Of course they do not. Those first responders, pilots and soldiers are, themselves, products of our multicultural experiment.

The single-minded intolerance – call it what it is, racism – that undergirds the entire gerrymandering principle is what we’ve got to fight. It’s why we have to vote for The Democrat, 2020, in force, next year. It’s why our down-ballot legislative decisions will be more important than ever. It’s why people are getting behind Amy McGrath in Kentucky, and why it’s cool that Stacey Abrams isn’t running for President (even though she’s an enormously worthy candidate).

Party of Lincoln voter, you’ll want to think this through. You need to be ready to go up against the juggernaut at the head of your party, whether it’s with my blue suggestions or some principled reds on your side of the aisle. But you cannot deny what your party is doing today, right now, with your implicit approval. Fix it, with us, and we’ll argue again – but please, let it be over defense spending versus child care.