Things you learn (or remember) in East Africa 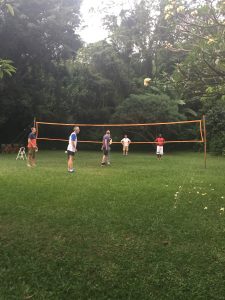 I haven’t played for a long while, but I had occasion to play in Kampala again after a years-long break.

Volleyball is my jam, despite the obvious hiccup that I am not very good at it. That fact is completely in character: I’m not good at any sport. But volleyball, I like. Okay, I love. I am in fact completely loopy for it. Anything that someone can play for literally hours without stopping can plausibly be said to be “loved.” I am minimally competent, and I will play for hours and hours until the sun goes down or someone bodily removes me from the court.

I may have gone a bit soft.

I used to visit a lot of schools. When I first started in this career, a fair portion of what we did was actually visit the places where projects were underway: primary and secondary schools. It meant a lot of driving, significant ingestion of dust, and anywhere from dozens to hundreds of kids, almost always in school uniforms.

(Having grown up where uniforms were not the norm, and were in fact worn only by “the Catholics up the street”, I always found these uniforms so adorable – everyone in matching blue or burgundy and gray or khaki, and don’t forget the plaid! Standing to deliver. Lining up for roll call. Rarely did we ever line up so well at Mark Twain Elementary… unless dogged by Mr. Degeneff, which is another blogpost entirely.)

Not that I ever had it really rough in the field. Not by a loooooong shot. The worst hotel I ever stayed in was still better-equipped, and more protected from the elements, than the homes of many of those kids in those uniforms. I’m sure that goes without saying but I feel like a big whiner if I don’t at least acknowledge how posh I had it, even in the most challenging of my earlier jobs.

Over time I started working on bigger projects where I would train people to do the fieldwork, but only supervise their work from afar. Here’s a pic of one of our groups of fieldwork teams, in Zambia, fresh off their training and dressed in their best local gear:

Or I worked in different sectors or in places that were not as amenable to site visits: rural Afghanistan, say, or an evaluation of security sector reform. There are some places where I don’t blend in, no matter how many scarves you tie around me.

As a result, I’ve been fairly… comfortable these last few years. No long dusty rides out to visit schools or clinics, no flying to out-of-the-way places like Ulan Ude or Magadan in Russia to see their internet facilities. Since about 2014 I’ve not worked in extreme temperatures, flown into especially small and/or rickety airports, or been close to live conflict. I stayed in major regional capitals while I lived in Colombia, and then in this first year of consulting, I trained a group of evaluators in a hotel conference room, and worked on educational materials for evaluators from the comfort of my apartment.

This latest trip was different: Walking into my hotel room in Dar Es Salaam, my first sight was a mosquito net over the bed. Suddenly I was brought back to Work Trips Past: taking malaria pills, eating with my hands (I am notoriously and comically bad at this), editing my notes while bumping over washboarded roads, getting lost (a lot), having adventures that are the most fun when I’m talking about them later, and when I’m at home all spent and sunburnt. There’s something in that, something I maybe forgot or put on the back burner as I got better about tabulating my frequent flyer miles.

But of course, it’s monster fun.

You can carry a lot on a bike

The bikes along the road were legion – as good as a cart for going uphill, and superior on the downhill side.

It doesn’t have to be a bike: lots of vehicles are used for cargo that appears, to my Western eyes, oversized:

And now two photos that are not from the inside of a moving vehicle… but rather from a Friday night fest where Kampala gets its BBQ on:

Caution was never a real strength of mine. I’ve always been a little oblivious, a little caught up in my thoughts, and about 50% too trusting – at least going into an encounter. I may also have discounted my own little voice about oncoming dangers. I’ve been very lucky, and been treated well by about 99.9% of the people I’ve met.

So what is it about my current situation that’s left me a bit… scared? Why am I more nervous, after such good experiences? I’m really struck by the way this has changed over time for me. “Calculated Uncertainty” was my Standard Operating Procedure for years; now I’m nervous about what comes next.

Part of it is down to being in charge of things. That’s been a growing trend in my work, too: it’s no longer just me I’m planning for (or notplanning for, as the case may be). Now when I fail to plan, I get blowback from all the people I’m demi-responsible for. The stakes are higher because others are waiting on my decisions, but my process is about as impulsive as it was when I was the only one affected.

Another part is more elemental, though, and I’m scared even to write about it, much less publish it. I once operated under a heavy dose of Keri Exceptionalism – that it would all work out because I’m me, and my mom made me feel special, so I was.

I don’t know why it took me so long to see this as a flimsy premise.

Like everyone else, I’m made up of wild spinning atoms, subject to unpredictable battering about, with good luck and bad equally erratic and random. Things could actually come crashing down. I’ve been lucky in that they haven’t, but Mom’s not here to protect me anymore, and that makes my own specialness feel at risk too. I’m not necessarily the one flexible, clever soul that can find her way out of whatever problem arises. Is it a crisis of confidence, an accumulation of evidence against wide-eyed innocence, or just a temporary (perhaps perimenopause-related) worry-fest?

Obviously, no answer here. But as scared as I am to post this, I feel all the lighter for having written it.