Summoned by the General 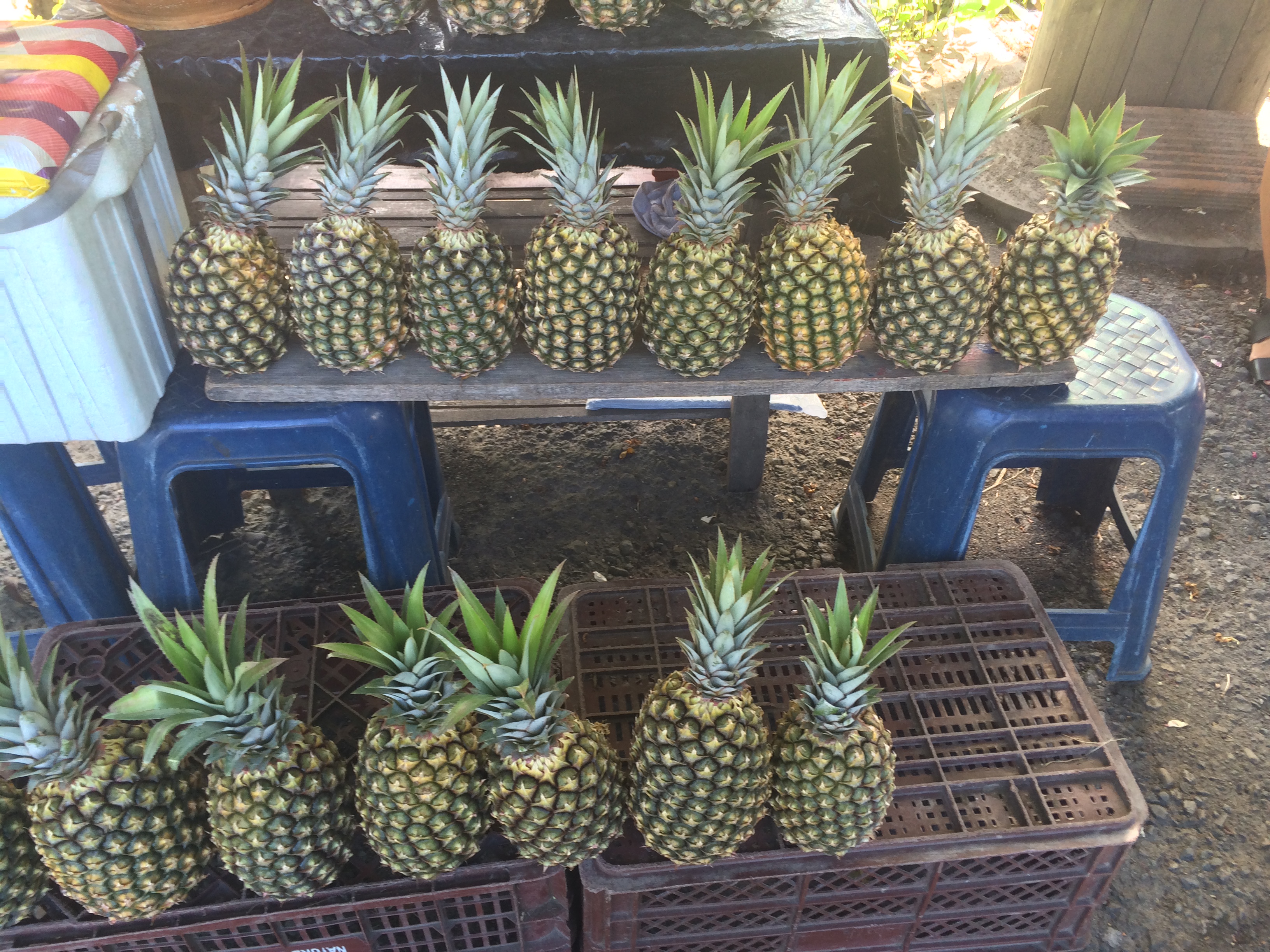 Well over a hundred data collectors are bouncing around the Colombian countryside, working on surveying over 20,000 households for the evaluation I’m working on. Twenty of them got stopped yesterday in a remote county not far from the birthplace of the FARC.

(Side note: there are actually a lot of places here that claim to be the birthplace of the FARC, or the epicenter of FARC support, or the place where the FARC buy their groceries. I can’t confirm or deny any of it, but i can say I think there’s a perverse fascination with being close to their danger, their orbit. Like in the US a fascination with Bonnie and Clyde, I suppose, or one of a variety of rap subgenres that are “urban” in the sense of gangsta, scary, “black.” It makes one feel bad-ass to be associated, even if one would blow one’s sphincter inside out with fright, were one actually confronted with drug running, automatic weapons, and/or revolutionary ideology in the flesh. End side note, as it’s now longer than the rest of the post.)

A lietenant coronel from the army decided quite independently that those twenty data collectors weren’t legitimate, that the survey equates the armed forces with the guerrilla, and tried to confiscate their tablet computers. Most of these kids are kids – making a little money while in college, or some housewives who find the unstable work schedule kind of cool. They find themselves successful – good at charming people into doing a long, dull interview, and remaining chipper on long bus rides between villages. I know its a weird career, but for certain people its a good fit. But the last thing these folks are is subversive.

So this Lieutenant Coronel gets this bug up his butt.  Meetings are called and cancelled. Our survey is sent up the chain of military command. Governments knock heads, to no avail. The result? I am in a minivan on a remote highway, summoned by the General.

The drive is long – four hours – not for distance but for twisty turny curves and approximately one billion tanker trucks. Its super green and greener as we drop off the Bogotano altiplano. The area is known for veal and pork that are cooked long and slow almost vertically, on spits that tilt gently backward toward steaming logs. They are also, apparently on a Pineapple Highway – en route from the best pineapple zone in the country, these lovelies are available everywhere we look.

So there are generals here, in lots of rural areas, because Colombia is still at war. (Not where I’m going, don’t worry.) It’s a pretty straightforward divide: Bogota, Medellin, Cali, Cartagena, the big cities and their surroundings: not at war. Everyplace else: at war. The General at the other end of this road awaiting our arrival is said to be very reasonable and experienced. When we meet him, he says his staff have no right to interfere with us. It may be at war but Colombia is still a democracy. Still, he wants to put in his two cents. Citizens are fed up with so many surveys. The survey questions we are asking place the army and the illegal armed groups at the same level. Our data collectors are from a town known as (you guessed it) the home of the FARC.

The FARC have been around for five decades, and they do have a lot of followers. I have a tendency to mentally write them off, because I’m not Colombian and I don’t know any better. They’re in peace talks, right? They are severely weakened militarily, right? But the truth is, they’re a part of the social fabric here, in many places. They have approached our data collectors in several sites, to find out what we’re doing in territory they perceive as theirs. (In some places, it really IS their territory, functionally.) They have their own letterhead! 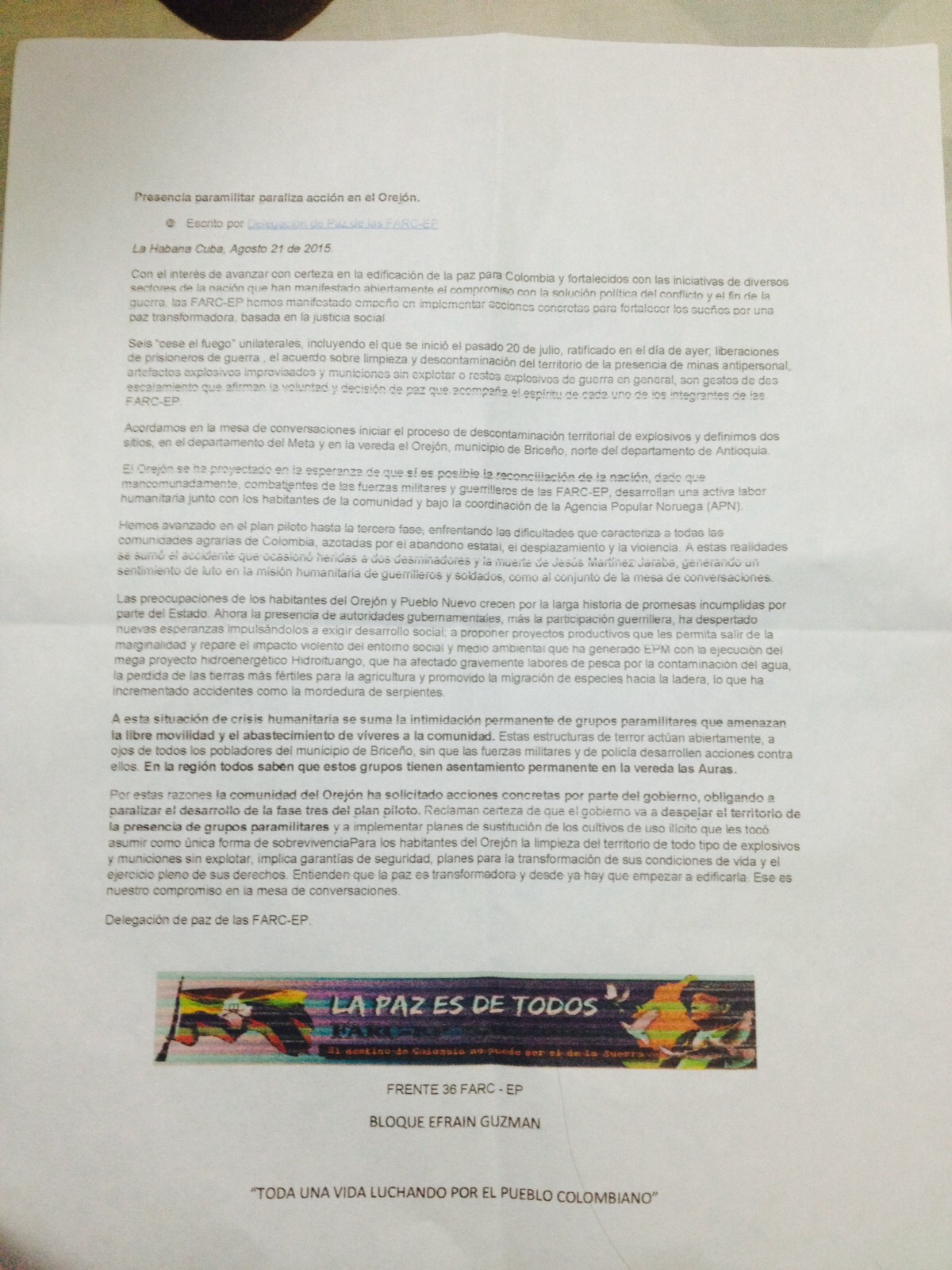 So the General has a right to be paying attention to what kind of survey work is going on. He’s got a vested interest in firmly, finally and flatly uprooting the FARC from their redoubts around the country. I am glad to report the General genuinely listened to our responses. He also seemed to get bored and i gave up trying to explain anything technical. In the end we will continue to do the survey in his zone but we will move those data collectors somewhere else and find another twenty who are from a more “neutral” place, if one exists. Eight hours of driving for that, my friends. And one helluva pineapple.

excellently written! enjoyed it a lot!