One week in Bogota 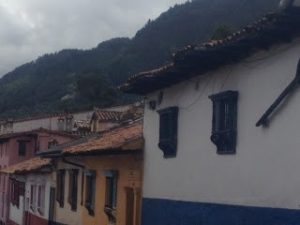 My first week in Bogota ended last Sunday with a spin through the city – on Sundays, the city closes down many major avenues and they fill up with people on bikes, people on rollerblades, people with dogs, people in wheelchairs, looky-loo tourists, police officers in shorts (always entertaining), people selling snow cones, people selling fresh juice that they squeeze right in front of you… in short, it’s absolute mayhem. There’s no real bicycling to be done, at least in parts of the route, because it’s sooooo crowded. But adorable and fun nonetheless. Here’s a shot of the street before it got crowded:

And here’s me with a selfy:

One of the best parts of Sunday was seeing the downtown area, which I’d not had time to visit before. It’s got cute colonial houses climbing up a hill, and in the big plaza, columns and majesty and pigeons.

And let it not be said that Colombia has lost its old ways. Herewith, a lady leading a llama up the street while I was riding around looking at apartments:

I saw apartments with incredible views:

Apartments with recent remodeling, such as of kitchens and baths:

Lots of curved stairways and some skylights:

And I met a taxi driver who switched out my bills for fakes – notice (as I should have) the blurry print on the corner, and the identical serial numbers:

Later I went out for a steak. Seems I’d earned it, right? Mostly though I just had a good time. I like my new boss and the job and even the clients, as much as one likes one’s clients. I haven’t found just the right house or apartment yet, but I’ve got the weekend ahead (and another Sunday on the bike!)