How To Spend Money You Didn´t Know You Had, In London, In 48 Hours or Less 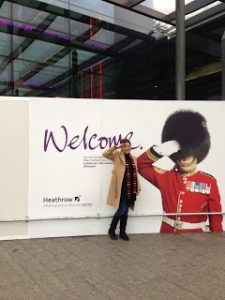 Question: If you’ve got about 48 hours of awake time in London and want to see things you read about in guidebooks, shop at the special stores available only there, taste the meals of amazing and reknowned chefs, all the while traipsing tourist pathways and staying in a perfect little boutique hotel… how do you do it? How do you do it… all?

I cannot make or stick to a plan for tourism in a foreign city. It is alien to my nature. I can only wander, get lost, delight in getting found again, get lucky with a particular lunch or art house or shop, get unlucky later, wonder miserably what I ever thought I was doing coming here on my own, turn around in place multiple times (for that true “lost tourist” look), and take bizarre series of unconnected photographs. But if that, instead, is what you’re looking for, why, come on along!

Christmas decorations were in full swing, colorful and overblown and lovely. And people were out in droves.

I went to a silly play called The 39 Steps, loosely modeled on a Hitchcock play but made goofy by four British actors playing a hundred or so parts. Sometimes the wardrobe changes were so frequent and fast that the players did them right there on the stage, going from voice to voice and character to character by flipping on a different hat or dropping a lacy robe over their police uniform.

I found an adorable hotel – one of those “get lucky” moments – and I won’t tell you its name, for fear there won’t be any space in it next time I go to London. It was 89 pounds a night but I had a whole loft apartment to myself, with espresso maker and views of the newly remodeled St Pancras station:

This is the hotel, but you’ll not find its name here. Ha ha!!!

And speaking of secrets… not a very good one if you’ve got it on a chalkboard, eh?

And with a telephone number??

I don’t think it’s a great sign that I found this little car, which I love and want to own, in the fancy shopping district Notting Hill. But isn’t it just the cutest? I think it looks like a soap bubble. Dad said he’d get me one, didn’t you, Dad?

Last were two things I didn’t even hope to find. First I was really late in looking for a “traditional Sunday Roast”, which I had been seeing all day on pub menus as I walked around town. By the time I got back to the hotel late Sunday night, I didn’t hold much hope I’d be able to find one. In fact, I found one at my hotel, in an adorable “foodie” restaurant with just-a-bit-hip-but-not-so-far-as-to-be-aloof feel to it, and the meal pictured below. Cavolo nero (which is the kale thing in the little cup) competed with the Orzo Gratin for Best Dish of the Night. Mmmmm.

And the reason I got back so late is that I found the place at right – a bar with twenty or so ping pong tables, called Bounce. If there’s a heaven, it must look like this. People were playing ping pong in every direction; cheering, jeering, trash talking; balls bouncing and flying everywhere and a little bucket of them at each table so you didn’t have to chase one as it caromed off the other guests. I wheedled my way into playing with three gents who were playing a round robin between them. (Yes, I beat them all. Fortunately they still let me play.)