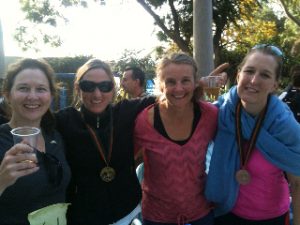 Yes, of course, very busy, blah blah blah; however, I have been making a roundhouse effort NOT to work too much or spend too much time in front of the computer. I’ve just gotten back from several weeks in Pakistan – in time for the holidays – and I can tell the difference for the effort. I’m in a better mood, such that the idea of work starting again tomorrow doesn’t make me want to cry.
While in Pakistan I ran a 10K in the Diplomatic Enclave – one loop and a half around a space that is walled off for outsiders and their Embassies. For the last couple of years I have only run 5K at a time, but I wanted to try – all my friends were doing it (all three of them). There are some very gentle hills – at least they are gentle in a car driven by a nice Pakistani man who is telling you about his wife and family or asking where you want to go shopping. When you have to run up them they are decidedly Mont Blanc-like, and set in pairs – first one, which you cheer as you master, then a second one that kicks you in theÂ teeth and laughs at you.Â

The run started at 11:30 a.m. after the earlier start of a half marathon, so it was pretty hot by then – maybe 28 celsius? Mostly sunny but some nice shady parts. The half-marathoners ran the opposite direction around the loop and did it almost three times. There were not quite 80 runners thusly rotating. I’m not really happy with my time – 1:09 – especially when I found out the winner of the half-marathon, an American man in his 50s, did his 21KM in just 1:26!!! That’s 4.1 minutes per KM, folks – really speedy for anyone, let alone some diplomat on a bunch of hills far from home!

The pic below is four of us runners: me, a German woman who won the half-marathon in her age group and ONCE CLIMBED MOUNT EVEREST (see her link here), my colleague Julie from Britain, and another new buddy Sallee from Australia. They gave us wine after the race – great idea, give liquor to dehydrated people who haven’t had access to any for a couple of weeks. Brilliant!

One thing I noticed as I went through the list of participants is that the race organizers (called the Islamabad Dashers) included our nationalities in the listing, since we’re all from all over. The Americans were a really diverse bunch – European surnames, Latino, Asian, and a Persian one I wouldn’t dare try to spell. Yes, she’s Persian, and yes, she can cook gormeh sabzeh (sp?) and lastly, yes, I asked her to cook it for me!!! I’m sure it will not hold a candle to Ali’s version but hey, any port in Islamabad. Anyway, it’s cool that our country advertises one of its best qualities – we’re from everywhere and somehow still get along!

Work IS busy, and exciting. The entire team (save one ego-blinded scuzzbag) is fantastic. Smart, funny, and love a good challenge. I have five staffers so far and will hire four or five more before this is rolling on its own. We’re also contracting a lot of data collection – public opinion polling, focus groups, ethnographic research – and will (someday) have to analyse all that. That’s my team’s responsibility; the rest of the 20-some-odd people are gearing up to do different kinds of projects – legal awareness campaigns, training police cadres (including women officers, who are really really rare and under-powered here), support to local governments to improve service delivery, and the like.