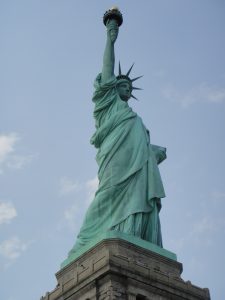 There’s my sister! The one looking at the camera, of course. Though I also really felt close to the Big Green Goddess by the time we left. Kyna had never been to New York, and I’d never been to see the Statue of Liberty. We took a few days between her posts and went to soak up some American-ness.

The statue is more than I ever thought it would be. The site is exhilarating – set apart from the city but looking squarely over it, pulling in people and beliefs and countries for a century, then putting them out on the streets of the U.S., asking them to get along and get things done.

The folds in her dress – that’s metal, folks. It looks like gently draping cloth, but it reveals itself as mastery when you get close up. The image of a woman is one of the most important linkages we have as a society. We all believe in her. She just stands there, or rather strides, looking like she’s ready to take on anything. Powerful and moving.

She’s seriously got thighs that could crack walnuts, too. When I say she looks like she could take on anything, I mean the whole world. It’s easy to believe in America when you’re staring up at her.

And it’s easy to believe in commerce in Times Square. Kyna and I rented a room on the 75634th floor of an enormous Marriott next to this photo. You know those 7 billion people we have in the world? They would all come pouring out of that place right before the Broadway shows were about to start. Kyna and I got tickets for Billy Elliott, which was cutesy and fun but nothing like the Addams Family would have been. Sorry, Kee.

Fortunately we found the best Mexican restaurant in the city, or at least the one with the most alcohol. This guy is filling up tankards with expensive tequila and jalapenos. When you take a drink of the resulting infusion, your eyes bug out of your head and your ears leak blood. The only remedy is copious guacamole applied orally. It was great luck that they happened to have some.

[…] writing this blog in Liberia, continued here, went on to Dubai, Cambodia here, here and here, saw NYC at the height of tourist season, ate my way across Georgia (the ex-Soviet one, not the grits one), […]