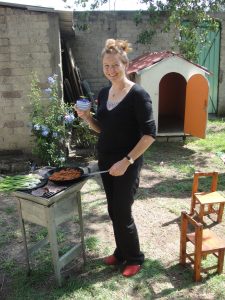 Oh, Mexico. You never know what you’ll find. We had rabbit tacos at a roadside restaurant, and outside this car was sprouting… something.

I had had a PERFECTLY AWFUL experience at a conference in a nearby city, and returned to the capital with my mood gloomy and my ego fair bruised. Luckily, a Mexican friend had invited me to spend the day with her family to celebrate Father’s Day in Amecameca – familiar to one and all as the starting-off point for my brother’s long-past ascent of Iztaccihuatl and Popocatepetl. These are two mountains, volcanoes really, that sit next to each other south of Mexico City. There is a legend about them, with Izta the sleeping woman awaiting awakening by Popo, the warrior. Something like that. Anyway, Kyle climbed them back in 1987 or so, and set a record for speed (probably because he then skiied back down.) He was with his friend Larry, and once they got back to Amecameca, a party with homemade (“bathtub”) tequila was waiting for them. I hear that was the last time Kyle had tequila. And this is Popocatepetl. Iztaccihuatl hid behind the clouds this Father’s Day.

Anyway, on with the 2011 story! Gaby and her daughter and husband picked me up, dusted me off, and took me out of the city. We had another soul in the car: Gaby’s father-in-law, Delfino.

He is a retired barman from one of the old Cabaret clubs in Mexico City. He knew we’d want margaritas at the parrilla (barbecue) so he made sure we had all the ingredients. We also picked up some fruit – like these crazy red rambutan.

We stopped for a quick look at the church in Amecameca, and Jorge, Gaby’s husband, explained the different motifs. He’s a serious history buff, and loves to share his love of Mexico. That’s not uncommon, I think, in Mexico: there’s something that’s like patriotism but resonates more with culture and the milennia this country has weathered.

There’s so much still here to see, from those early cultures. It seems to me that Mexicans have a lot to be proud of. Mexicans, also, are survivors. They take the good and the bad and they don’t differentiate – both are valuable, both give us something.

So, enough philosophizing and waxing poetic about Mexico. It’s time to eat. I am drinking the best margarita I’ve ever had, made by the master (Delfino) himself. The cooking bit is just for the camera.

Tacos. Tacos!!!! This was the best lunch ever.

A passel of adorable little ones regaled us with a talent show. Here they are rehearsing:

And in full voice:

Guess who didn’t think about work, or stupid politics, or anything but sunshine, hammocks, tacos, kids and margaritas? Best antidote ever.