Maxing out on Star Wars and deserts 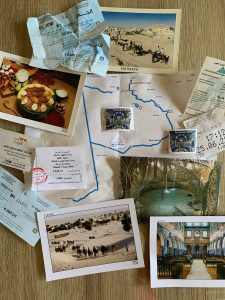 This post picks up where the last one left off – in the mountains just before the desert, in Matmata. We’d had a great recommendation of a little place to stay, consisting of actual troglodyte caves, lovingly maintained as you can see below:

I found an Arabic Scrabble board in the hotel’s common area! The very kind proprietor also took me to a mechanic ten minutes away* to fix the light damage I’d done to the rental when I ran over the sand berm on the way to the oasis… And then he and his son fixed us a hearty family-style meal (with which we could have fed a family).

* It was ten minutes to New Matmata, which it had taken us 30 minutes to reach via Google Maps’ directions the day before!!!

The next morning, we took off on the last leg of our trip: to Tozeur.

Chott el Djerid, that looks like a lake, is not. It’s a salt flat. Crossing it took about an hour, and as we reached the other side there were seas of palm trees – more oases, but much more substantial. Our hotel was in one of these oases – making the temperature very slightly less oppressive but the mosquitoes infinitely worse. But it had other pleasures – a weird zipper-style staircase, some kind of a turkey, plus cats and kittens!

George Lucas really got around

Tozeur is a bigger tourist town on the edge of Chott el Djerid. There’s a super-fancy luxury hotel there, and a couple dozen other hotels, attesting to what a great place this is to visit. Four-by-fours driven by very experienced drivers take you to a range of sites in the dunes and on the salt flats, often related to additional filming sites from the first Star Wars movie. Some fellow travelers recommended wearing long sleeves and pants rather than the shorts and t-shirt we would normally have donned. It sounds crazy in this heat, but I think it actually did make a difference.

The driver took Ali rampaging over some of the dunes – I opted for taking pictures.

It’s such an intense landscape. I was on edge! Kept filling the gas tank, checking the car’s thermometer and the weather channel, not believing what we were enduring was survivable! But of course we made it home, and countless others have visited these places and lived to tell the tale. Maybe if we’d taken on this trip in, say, February rather than June, it wouldn’t have felt so intense.

If you’re any kind of Star Wars fan, that heading will pique your curiosity. So will these pics and video:

This place is not as isolated as it seems: there is a full slate of touristy stalls selling rocks and necklaces and all that kind of stuff, plus a raft of young men carrying desert foxes in little pouches. They run up to the arriving jeeps and offer to let you take a picture with the little animals, which look emaciated and completely wiped out. I freely admit I succumbed to the feeding-a-baby-camel thing, but I couldn’t bear to respond to their little captives. I held up my hand and said, “Non, non, et NON!” as if they were offering me chopped liver. But it was hard not to feel bad for the foxes.

The actual set, however, is amazing:

One last Star Wars site, about an hour away on the salt flats, is Luke Skywalker’s home. (It helped a lot that I’d re-watched Star Wars the night before we went to all these places!)

Nothing for it but to drive

We were wiped out, fairly tan, and generally hungry when we got back to Tunis. It was a wild, gorgeous, diverting, unexpected, marvelous trip. Thanks for coming along with us!

Dang! Only the cool kids get to hang in Mos Elba these days. (And, if you happened to adopt any wayward robots on the trip, take care while cleaning them up.)

Also, thanks much for the amazing photos.