In the Valentine’s Day trenches 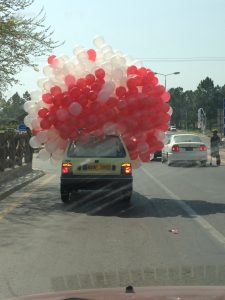 Field report: it can be intimidating to think about Valentine’s Day, no matter your relationship status. Beyond all the commercial imperatives to be partnered up, show yourself Living Your Best Life on Insta, and buy chocolates and teddy bears, there’s also the pesky not-universal-but-certainly-evident human impulse to be with someone.

Valentine’s Day supersizes that impulse, and I’ve known times of feeling like it’s a boulder on my chest. Maybe you, dear reader, have too.

Of course, that was B.R.: Before Ramon. Now it’s all sunshine, champagne and roses, and I feel uplifted by my relationship all day, every day, and double during vacations.

Still, we had a really great Valentine’s Day weekend. We sort of count it as our “anniversary” since we started seeing each other around this time of the year. This weekend, we went to the Four Seasons (ugh, luxury, amirite?) and wore fancy dress-up clothes and ate Baked Alaska (en flambé!!!) and swam in their multi-colored marble pool and went on a walk on the beach and whispered sweet nothings to each other. We really did! Gifts Were Exchanged. We’re in our tenth year together and have enough reason to celebrate, candy hearts notwithstanding.

But not even the Baked Alaska makes that moment. That flaming meringue envelops shared jokes and memories, understanding and appreciating each other (even the, um, less wonderful parts), and day-to-day life stuff. I guess that’s why Valentine’s Day often seems like a holiday that’s pushed on us by the greeting card/stuffed animal/floral lobby.

We met in Pakistan in 2012. He was a busy Embassy staffer who volunteered on weekends to host sporting events for the community of expats. I was living in a hotel and working on an impossible project. We started as friends exchanging language practice. He was a bit hard to read but he was strangely constant. He thought my head was attractively large. I thought he had nice teeth. He helped me negotiate the price on some rugs. He was appealingly logical, matter-of-fact, and well-spoken. I showed him how much there was to look at while driving in Islamabad, and bubbled on about my many passions.

Well that’s a weird way to go about it

Maybe a half a year after meeting him, I got a job offer on the other side of the world: one I could not, would not, turn down. We’d figure it out, I told myself. Or we won’t. Either way, I was going to Colombia, and he was staying in Pakistan. But then, doubts crept in… Would I ever find anyone like him again? (Answer: there is no one like him. That’s not to say I’d have been forever alone… but there’s no other Civil Guard officer who loves shopping, foreign languages, Spain, his family and me in equal measure, and who can watch with absolute reverence as Willie Nelson or Sting sings a song over and over on YouTube. I’m going out on a limb, but I say with confidence, there’s just this one.)

So for the next three years we lived three layovers and 32 hours of travel away from each other. I didn’t really plan or think about how we were going to manage it. It was Ramon who called me. Every. Day. I don’t know that we’d have talked that much if it had been up to me. I’m not generally a phone person. But I am a connection person, and I fed off his consistency. We also met up in lots of places – London and its Hobbit-sounding suburb, Twickenham; traveling around his family home in Madrid (Toledo, the Pyrenees, San Sebastian, Valencia); around Colombia (Bogota, Cali, Barranquilla, Medellin); to visit my mom in Deer Trail and my Dad in St. Louis; and one of his favorites: Chicago where the tiramisu’s as big as a Volkswagen.

After three years in Colombia I decided – apropos of absolutely nothing external – to move to Madrid. Ramon certainly seemed convinced we were going to stay together forever – I needed to know if he was right. And was I ready? I had a sense that I was not all that easy to live with… but I couldn’t be sure till we tried it. I was all in, which you could tell because I brought my bike.

To make it interesting, we lived in Madrid month-by-month, moving from neighborhood to neighborhood, from one AirBnB to another. Ramon was awaiting news of his posting to Tunis, which could come any day or never – so our customary comfort with uncertainty was on tap and on point.

I left my job back home and decided to become an independent consultant. But not yet: I took “a few months off” from work – with the idea of finally getting my novel published. Also, an orange fart-head was elected to run my country back home, and I was spending way too much time online being outraged. Ramon got up every day and went to work, no matter what far-flung part of town we were in, and I slept late and then tried to figure out what a productive day would look like, hopefully before he got back.

About a quarter of each day was devoted to looking for the next apartment. Then there was eating, and looking for coffee shops where I could work on getting my novel published. I can’t say that goal was reached but I also look back on that time as valuable – as codified in my blog, so it must be true. My blog hit 100 posts while I was in Spain; that felt (and feels) like something.

It’s a funny thing, a relationship. There’s permanence, which feels foreign and a bit unnerving. I added to that some unnerving nebulousness of my own, by not working, by moving from apartment to apartment, by getting lost in an unknown city. Maybe that was the best way for me to enter into the full-time business of being someone’s partner.

One thing I was definitely not expecting from a relationship was how much I’d learn about myself – especially the not-so-beautiful parts. After living alone nearly all my adult life, I was not prone to compromise. There was some troubling Thoughtlessness. Definitely Impatience. And infrequent but awful moments of actual Unkindness. Seeing those sides of me, I bugged him with the question: Why me? I know I’m cool, I’m a marvelous daughter and sister and auntie and friend. I’m funny and quick and make odd connections of things. (Want to see if you do? Try this divergent association test – super fun!) I write, I dance like a dervish, I work hard, and I enjoy the world.

But putting those things up against the bad sides, I couldn’t readily see how anyone would want to be around me all the time and take the bad with the good. It really troubled me. Slowly I have stopped asking him the question, without ever really resolving to my own satisfaction whether or not I’m a good partner – but I’ve come to trust that HE THINKS SO. Which is a pretty potent realization.

Of course, Ramon is not perfect either. But I can confidently say he is the less complicated of the two. He’s very easy to get along with.

I wish my mom’s generation had parented with the “use your words” formulation. That’s a blind spot for me – I think I learned early on, and too well, to hide discontent or anger. In my thirties I read a lot of Carolyn Hax – you may have seen her column. She is sort of a Dear Abby for this century. I want to have her no-nonsense, straightforward style of saying what you mean. I have also soaked up a lot of that self-help-y kind of stuff about relationships like active listening, I-statements, saying how something makes me feel rather than pointing a finger. I’m sure when it finally comes out it sounds like an avalanche of pent-up resentment, awkward phrasing, genuine effort, self-doubt, the garbled contents of the Relationships section of the bookstore, and utter exhaustion.

Neither of us is the bickering type – both conflict-averse, for sure, but also fairly sunny people. Ramon is also a patient fellow who genuinely listens when I’ve got something to talk about. He doesn’t always start conversations like that, but he doesn’t shy away from them, either. So when COVID locked us down together, and inevitable stuff arose, we at least had willingness to try to find decent and fair answers. Workarounds, sometimes, or changes, or substitutes. Sometimes I’m sullen for a while because it’s hard for me to unwind after I’ve wound myself up.

But it sure is a revelation to be able to talk about stuff, really talk, even when it’s painful. (I mean, to someone I’m not paying. (Therapy joke! Raise your hand if you get it!))

Y’all know I live in Tunisia. We’ve been here over four years, including during the pandemic. Talk about permanence! With no work travel, it is surely the most stationary I’ve been since… Vail? That’s nearly thirty years of bustling. My pace slowed. I might have languished. I stopped to talk to cats. I learned to cook and even emerged feeling decidedly cheffy. My Thoughtless and Impatience don’t seem daunting anymore, and I can’t remember any Unkind moments. I am much better at just looking him in the eye and saying what I need to say. (“I want to watch The Handmaid’s Tale.” “Quiet, I’m pooping.” “Please put away the ketchup.” Or whatever)

Now we’re planning to leave Tunisia in a few months, and we don’t know where we’re going next. But it’s okay. We’re still comfortable with uncertainty. And being with Ramon is now being home.

Valentine’s Days have come and gone. Ramon jokes that he knows “I love that stuff” – as if he’s just indulging me. But if I didn’t know better I’d think he loved that stuff too.

Well, I jotted this down a micro-age or two ago but forgot to hit the unavoidable and in my face “POST COMMENT” button, hence this belated posting. I doubt the delay will impact the quality of this comment good or bad, but here it is for what purpose I know not:

Tom Robbins comes to mind. He’s helped me formulate a theory on love that may not be original but I claim it nonetheless. It states: Any two people can fall in love. ANY two people. Very similar OR very different. The trick though, is making love stay.

“Who knows how to make love stay?
Tell love you are going to the Junior’s Deli on Flatbush Avenue in Brooklyn to pick up a cheesecake, and if love stays, it can have half.”
― Tom Robbins, Still Life with Woodpecker

Congratulations Keri and Ramon, on making love stay! That’s no small feat! And without cheesecake! Although maybe what TR meant to write was “Tell love you are going to the Four Seasons in Tunisia to pick up a Baked Alaska, and if love stays it can have half.” Keri, that would make you, Princess Leigh-Cheri…and Ramon would be Bernard Mickey Wrangle, an outlaw. (morally preferable to being a criminal, as TR reminds us!)