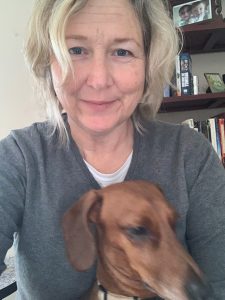 My friend here, Lisa, has two twelve-year-old kids – twins, Kai and Neave. They went to Switzerland for the holidays and upon returning Lisa discovered she had COVID, but the kids didn’t. No good keeping them with her – they’d only get COVID, and miss a bunch of school. So she sent them here and I moved into her place (which is where we lived after the fire) to play Auntie Keri. Lisa gave me her car keys too – which is great because I can go buy food for their tween appetites.

No, Lisa, of course I’m not feeding them worms!!!

Here are my self-imposed rules, in order of importance:

Luckily, I already know and like these two kids, so picking them up at the airport was going to be a breeze. It was their first solo flight, and Lisa and I watched their flight course through the skies Tunis-ward.

Even though it was their first time flying, and it was the peak of omicron requirements, they were out of the airport quickly. Then we went to pick up their dog, Spud, from a dog sitter.

That was heartwarming, especially when the dog sitter started crying. I nearly offered to leave the dog with her – she was bereft.

I gotta admit, Spud is a pretty special little poochie. If I were to be uncharitable, I’d say he is a bit spoiled, but he’s awfully smart and cute, so I can see why Lisa dotes on him. When we got him back to the house he rocketed around looking for her. I would have to do as Primary Lap, with significant Secondary Lap duty from the kids.

So, yeah, he’s cute and licky and can really waggle that wienery little body, not to mention that his food is called a Dog Log and comes from the fridge. It’s also hilarious how he gets down stairs.

But he’s cold, dammit, even in the best of times. He wants to be in my lap because he wants my body heat, and still he shivers with every breath. We have blankets for him all over the house, which he blithely ignores in favor of being in a lap. Yeah, a little spoiled!

I’ve had fun cooking for the kids – I have literally never ever cooked for a child in my life. Not even Lauren – I think with her, the one time I was asked to sit with her for three weeks, we ate out a lot. She was not a very big eater anyway – give her a bag of Smarties and she’s fine.

But I digress. I figured I’d start off the visit with a new, experimental recipe called Socca – spinach and chickpea flour crepes with a variety of fillings! It would be like taco night, but infinitely more sophisticated. And it involves a BLENDER!!! Except I couldn’t get the little creepy crepes to come up out of the pan – so I made a very sophisticated mess:

One of the kids clearly saw my distress, and told me, “Keri, I don’t think they’re nearly as bad as you think they are,” which is a compliment, I’m pretty sure. The other kid muddled through a couple of bite-sized somethings with vegetable in them and then opted to go back to his suitcase for the considerable stash of Swiss chocolates he’d brought back with him. As I had nothing else to offer, I couldn’t really blame him.

What the heck, looks don’t matter. It’s not about the visuals! The roasted veggies were good anyway. And several other meals came out much better – spaghetti and meatballs, Asian-inspired noodles and veggies, quiche – stuff I already know how to make.

Surely my most lauded meal was the one that started at the pizza shop and ended at the ice cream place:

I cannot blame them. This place knows how to bake a pie. But my favorite was a Thai-type soup:

But we’re not just eating

We’ve actually had a few hiccups: when we arrived from the airport the power went out, owing to a big water leak in the basement. We got the water to the leak turned off but it was still leaking. And the heater was not heating. And the dog peed in the house despite the door being open. A toilet stopped working. And a mouse came in. And the garage door didn’t work. Then the other garage door didn’t work. And the wifi. It was raining buckets. And a hallway light was flickering – but only when it was turned off. That’s weird, right? Does anyone else’s head say, “YOU WON’T BELIEVE IT BUT A SIMPLE ELECTRICAL SYSTEM CAN BURN YOU AND EVERYONE YOU LOVE TO A CRISP IN LITERALLY SECONDS. PUBLIC SERVICE ANNOUNCEMENT YOU’RE WELCOME!!” when a light does something unexpected? No? Just me? Okay.

So that first night I slept about two hours. I just felt 1) RESPONSIBLE in a huge way for the two fabulous kids of my plus-que-fabulous friend. 2) Freaked about the noises, sights, leaks, and every other damn thing in the house. 3) Frigid cold, though there were comforters piled up on the kids’ beds so I think they were okay. 4) Hobbled by a dog snuggled up in between my legs and under the covers. Could he breathe in there? He whimpered and moved in his sleep – but were those feeble oxygen-deprived attempts to get out? OMG. Being a parent is fr*&%&ing stressful!!!

The kids turned 13 last Friday. Their mom was justifiably miffed at not being able to attend, but I tried to soften it with a balloon-covered house and a chocolate cake. The kids were then whisked away for a surprise sleepover with friends.

I think they had a good time but another surprise came a few days later: they both tested positive for COVID. It’s been a week since the tests, and no symptoms – they’re officially allowed to go back to school. We isolated with them upstairs and me downstairs. I kept doors and windows open and my mask on, to mitigate the threat of covid and enhance the threat of hypothermia. The housekeeper also came up positive so I kept warm cooking and doing loads of dishes and some scattered cleaning…

Lisa’s friends wrote and called and texted, offering help and whatever I might need, even offering to take the kids. Most, but not all, have been the moms – they seem to know I might feel out of my depth (sympathetically, not critiquing) and don’t want to leave me with more than I can handle. I haven’t taken them up on visits yet, because I don’t want any more kids getting covid – but hopefully the worst is now behind us. Lisa is getting a new PCR test today, hoping for the “negative” that will let her come home. In the meantime, things are gradually getting back to normal.

Lisa gave me the keys to her car and I am LOVING driving all over. Last week when we didn’t know if we’d be sick or not, I rarely left the house. But before that, and today, I’ve been putting miles on her car as if I was in that crazy Dakar race – if it were run at a slow and slightly nervous pace through a billion unpredictable Tunisian obstacles. It is arguably impossible to take a picture while driving, so here you have one of the truck stop (!) I was at ten days ago, with coffee-cup tables. (But the coffee was AWFUL!) And Ramon on the right, ready to take off on an adventure with the kids to get ice cream.

I haven’t driven in Tunis, and in fact in many of the places I’ve lived, I’ve never driven – Pakistan, for one, or Colombia. It always seemed too scary. Too much traffic, too few rule-followers, just damn scary. I tried it in Honduras and in Zambia a bit – but never had a vehicle so it was sort of white-knuckle. So driving to stores or to the middle of town or taking everyone out for pizza – it just made everything easier.

And it was fun. I got to see how things connect up – places I’ve been to with Lisa or with our driver, Ibrahim, multiple times, but hadn’t ever had to navigate the funny turns, or the rows of cars that park along the main street, or the lack of lane lines (compounded by the lack of any consensus that lanes are a pretty good idea), or the drivers that jut themselves out into traffic because there are few stoplights, or the pedestrians (old, young, lame and able, attentive and not-so-much) who wouldn’t know a zebra (crossing) if it bit them. It’s exhilarating, maddening, and – now – very normal to me.

All told, I’ve found myself with a new and abiding sense of respect for parents, and mothers most of all, for the constancy of this caregiving thing. I have only experienced a tiny fraction of what they do, day in and day out, for a couple of decades – and still, I feel like there was not a minute to do anything else. It is genuinely unnerving and overwhelming to suddenly be in charge of some young lives, even if they are brilliant and funny and fun to be around and quite capable of lots of things on their own (and these kids are all of that and more).

So, abundant Hats Off to Lisa, to the kids, and to moms everywhere, as well as the dads who are doing their part too. And for dinner tonight? Pizza, methinks!!!