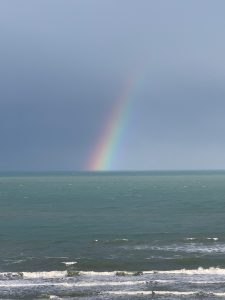 Ridiculously, I’m planting seeds in dirt today. It’s a bizarre enterprise – there is no way these little tiny flecks – some smaller than a sesame seed – are going to turn into anything. Our balcony gets beaucoup sunlight in summer (we have to lower the blinds each night or be roasted when the sun comes up in the ayem) so that seems propitious, until you see the seeds, which look like flea poop.

Last year I used an indoor planter with lights on it – cost $100 and was one of several appliances burned to a crisp by our fluctuating electricity. While it lasted, I enjoyed some basil and cilantro and chives, and even a handful of very tiny cherry tomatoes. After the indoor planter suffered its ignominious execution, I planted the shoots of basil, parsley and chives in a planter that had sat empty on our balcony after some tree-like object died. They flourished! It was great to pop out there for some herbs while cooking.

So, this year, I’m planting seeds. I got some empty pots and dirt at the store and some rocks on the beach – which were freaking heavy to cart uphill, by the way. But Mom always put rocks in the bottom of her planters, and she could make a carrot grow out of cement if she wanted, so I felt the need to follow her lead.

I don’t have a watering can yet so I poked holes in a 2-liter water bottle. That works great outside on the big planters, but less so (sorry, Ramon) on the three indoor ones, where I get more water outside the planters than inside. But the seed packets say to keep them moist, so I re-aim and try again.

The other seeds I’m planting may take longer to fruit. I’m taking acting and improv classes online. Coming soon (or not that soon, really) to a stage near you.

We’re coronafine here – that is, fine, within the current circumstances. A little bit of an anxious, conditional fine. Short-timers’ disease – reaallllly wanting that shot I keep seeing my Facebook friends getting. We’ve got no urgent complaints, but it’s still not the comfortable go-on-about-your-business fine we might otherwise be. I’ve got plenty of work to keep me occupied, as does Ramon – he is even in Madrid right now, working like crazy and hoping for a shot himself. He had a positive PCR test back in December, but no symptoms – or, we’re reading the whole thing wrong and the weird throat thing he had a month prior was actually COVID.

It’s spring, which is a definite positive. The weather is volatile – briskly chilly and windy and rainy one day, and startlingly sunny the next. Lots of blooming going on. First was the mimosas – little yellow balls like the ones on the rickrack my mom sewed onto my Pixie uniform when I was five.

Ramon and I went to a fancy golf club for lunch last weekend – tiramisu like you wouldn’t believe, and salmon sashimi. My pastry had GOLD FREAKIN’ LEAF on it. Avoiding the question of why you’d do that to a poor helpless pastry, I’d also like to know: are rich people terminally narcissistic? Or is it a passing thing?

No Mickey Mousing around

Not all is fancy golf club lunches around here, no sirree. We have had MICE. I have now had a few confrontations, none of them ending particularly well. One was on the kitchen counter. Did it eat anything? If so, what did it think of my cooking? Why did it have to be so cute? Tiny little pointy noise and giant black beady eyes. Too bad I didn’t get a picture of the little fella/lady – blog posts are pretty dull without a visual.

In another exciting moment, Ramon killed one with a broom – which took forever and was predictably awful. Although perhaps for the mouse it was the better way to go. Another time the landlord put glue on a piece of cardboard and, oh Lordy, I don’t ever want to hear a mouse screaming again.

The most recent mouse followed me into the bathroom – and caught me off guard. I don’t know if it was the slick tile floor or if s/he was old or clumsy, but s/he couldn’t get away from me, and seemed to be spinning out as s/he tried to run. I grabbed a bucket. My plan was to trap it and take it outside. It was so slow running away, that even when I missed the first time, I had more than enough time to try again. But somehow I put the bucket down right on its neck and killed it. I was horrified. Some compassion – mine ended up being the cruelest carnage.

Without Ramon here I’ve overloaded on hot spicy stuff and coconut milk, two things that aren’t up his alley. All Asian-inspired dishes, even if I don’t always have exactly the right ingredients. Sesame noodles with pickled radishes, tom kha soup, larb gai salad, dahi toast. A new batch of avocados has arrived, and without Ramon here I eat two per day shamelessly.

Tita and Li’l Bitters artisanal aromatic bitters, with a hand-drawn label I will draw myself if you think you might want that

My other project is homemade bitters. After exhaustive online research and scouring the medina for obscure roots, I created what I think is going to be a market-reorganizing recipe. Two weeks of steeping the following in the highest-proof alcohol I could find here (43% Knockando do not @ me):

The first steep ended a few nights ago, and I mixed the various bottles together and then mashed and re-steeped the solids. With this liquid I’ll water down the bitters tomorrow, and also caramelize some sugar to add that in. After five more days, it’ll be ready to flavor my favorite cocktail. I will have enough, in fact, to flavor the favorite cocktails of half the expats in my neighborhood – so if you’re around and want a private tasting, that’s exactly what balconies are for.

It is a bit of a weird enterprise since I’m not that big a cocktail fan. But it’s so cool to shake the jars every day, like a mad scientist. The stuff inside smells amazing.

I’ve decided to call my brand Tita and Li’l Bitters, in honor of my sister’s two elderly kitties who have delighted people for nigh on a couple of decades and across at least fourteen time zones. I am not joking. The only cats you’ll ever meet with full-on diplomatic passport privileges who are also content in the most down-home of run-down railroad towns. Their skills as deep emotional support kitties are unmatched – imperturbable buoys for our stepdad Bob while he was swimming in grief. From left to right below, Tita and Li’l Bit (The Cat Formerly and Latterly Known as Monstruo).

But Keri, what about the TREES???

This’ll be a real crowd-pleaser. I lifted my head up recently and noticed what a weird collection of trees we have here. Here’s a sample:

Have a look at this article on the Van Gogh painting. Gorgeous.

I got some heady praise this past week from a friend who, like all my dear Readers, never misses a Missive. Here’s what he had to say about the blog:

I have to say, I liked this A Great Deal.