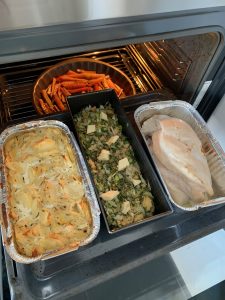 I was feeling a leeeeetle sorry for myself, having to spend Turkey Day away from Dad and the rest of the family, so I set up a major distraction. I was going to Cook. Thanksgiving. Dinner.

Dear readers, 2020 notwithstanding, I have never been a cook and never contributed much to the Thanksgiving Day festivities. Well, except my lively presence, trash talk at the poker table, and IT advice for Dad’s electronics. But food, no way. That just wasn’t my bailiwick.

This year being the weirdest ever, I cooked an entire Turkey Day menu. More about that below. To put this post together, I went through Turkey Days past, and remember what I have most to be thankful for. Forthwith, some memorable Turkey Day festivities.

Nothin’ shabby about the meal these three ladies put on – and still had time for poker later. And you’ll see a pattern emerging of Keri-and-Dad grinning shots – as I go back through and find the same shot over and over, year in and year out, it almost seems like we did it on purpose.

Slipping in one pic from this year – I love it, because it looks like I’m playing football like a champ, instead of about to fall down, which I think is more accurate. Also, pink corduroy pants.

These pics come from my first Turkey Day hosting. I had to build a table for it! My friends all came around…

This one was in Alaska! Quite a trip – that place is like no other, especially when you’ve got people on the Inside.

Leave it to my brother to have a ping-pong-table-sized piece of wood in his garage, and leave it to me to bring an adjustable pingpong net in my suitcase for just such an occasion. In the pics you’ll see Kyle, Lauren, Dad, me, and Bart, the cat.

Back in St. Louis, this time with a new addition – Ramon. We took him up into the Arch and out to play golf with Dad. Check out Dad’s form… sublime!

This shot is a fave – a hat from Pashtun Pakistan, resting atop a head in St. Peters, MO.

Ali, Shane and I never thought we’d be mourning the election on our long-planned sojourn to Paree, but we made the most of it anyway. And maybe had more French conversations because of it – as soon as people realized we were Americans, their eyes bulged out and they asked us, “Are you okay?” We weren’t, but we also… were.

This year, Dad’s pants get baggier, and my gloves get pinker. Even when you didn’t think that was possible.

We had one of those weird moons in 2017, and Dad let me out of the house with his fancy camera. It’s weird to see us change over time, with some of the same backdrops as always – poker tables, pitch ‘n’ putt golf courses, Dad and Ethelyn’s living room, the Arch, and those beloved faces…

Getting closer and closer to the present day. We got dressed up on this visit to attend the wedding of Kyle’s namesake, then came back to Dad’s house for more poker.

I have no idea why Dad is beefcaking here, but that’s Dad – you can never tell what’s coming next.

Also had a special dinner with Tony in November, then we went to a show at the Folger. You know I can’t resist one of these set-up photos!

It is at this point in the blog post that I begin to be confused about which photos go with which year, but I am pretty sure these are also from 2018, when we had a party for me and Kyna, for our big birthdays. Why am I so crazy about these people? Why, too, am I so bad at poker?

We did not know what was coming, did we? I’m sure that was, and is, for the best. The world’s surprises this year have been uncommonly harsh, but last year we were living in a bit of bliss. Actual Turkey Day this year was at Ali and Shane’s house in DC, with their customary attention to deliciousness. I made it to St. Louis, too, but somehow don’t have any good pics, so enjoy these shots of Ali and Shane’s table:

It is not like me to take on something so ambitious as to have dinner ready at a particular time. Sure, I’ll try to make gnocchi from scratch, but eat at a pre-ordained time? That seemed overly hopeful. But Ramon didn’t have the day off – it’s not a holiday here – so it couldn’t drag on like my normal weeknight dinners, some of which we have eaten – quite literally – the next day.

So I picked recipes. There was a “one sheet-pan dinner” version in the paper, and I just substituted in the side dishes I wanted. The turkey-gravy-stuffing triumvirate was at the center, though the very idea of gravy really intimidated me. Then I thought I remembered that Ramon liked carrots so I found a recipe I liked for that; I got hooked myself on the idea of vertically oriented au gratin potatoes – something like the Hasselback potatoes I’d seen on the Britain’s Best Home Cook series. And then dessert: I love sweets, so I latched onto Ramon’s appreciation for flan and went for Creme Brûlée. Also, I’d bought these cute little ramekin-type dishes, so it was a good match.

I shopped on Tuesday and started that evening by marinating the turkey in buttermilk (well, milk with vinegar, since I don’t know how to say buttermilk in Arabic). I also made the base of the creme brûlées. Wednesday I busied myself chopping veggies and spices, including making Chinese Five-Spice Blend in my miracle chopper thing, which is now ruined and smelling of anise. But I digress. Wednesday night I made a schedule for Thursday, working backwards from “Dinner time” – 2:00 p.m. It took me a couple of tries but I got it all together in one schedule, and went to sleep nervous. No, really.

Thursday I got up early and went through all the steps I’d planned the day before. Making gravy was the scariest: but it came out great! Not lumpy, but very dense, like, well, flan, I guess. But saltier! For the stuffing I used a bunch of herbs from my miniscule garden (in fact everything that was growing there). Instead of slicing all the potatoes myself, I did it in the food processor. A light formed over my whole countenance. What an amazing machine. Then I stacked the tater slices vertically – so there’d be more crispy brown bits – and baked for an insanely long period of time.

This is the whole lot in the oven. Yes, that is cold butter on top of the stuffing – I do know how to live! The turkey breast, fresh from its buttermilk marinade, is just sort of coiled up in a pan. And the carrots are sizzling below.

As it turned out, not everything was ready on time. The turkey, damn the bird! But I wasn’t going to let the rest of it get burnt or cold, so we sat down and ate it with much pomp and circumstance, and a bottle of Tunisian bubbly.

Actually, I even made a little video in which I described all the dishes, but then I tried to close it by saying how much I wished I was in St. Louis with the family and I started crying, sooooo, I won’t be sharing that here. Also, in my haste to get the table right, I do believe I’d forgotten to so much as comb my hair yesterday morning!

The side dishes were amazing! The carrots were kind of Asian tasting, with vinegar and ginger, and the stand-up-potatoes had lots of crispy bits as promised. I played around with the stuffing recipe and you could tell, but it still tasted like stuffing! We dribbled gravy (which Ramon, whose English is excellent, somehow kept calling “groovy”) over some of the above and it was fantastic.

The turkey came out in its own good time and turned out to be the star of the show. I had low hopes, especially after the successful side dishes, but it was lovely and delicious and not dry in the least. With gravy on it, I felt like a real family cook. I was so proud!

Ramon was very impressed, especially with it (mostly) being done on time. Later we tried the creme brûlée!

This was definitely emotional eating for me! But even more, emotional cooking. I still feel a bit off kilter as I remember Bob pouring gravy over his entire plate – cranberries and salad included – or about Mom casually getting everything on the table at once. Losing Bob this year meant missing Mom, mourning Mom I suppose, all over again, especially at this family-oriented time of year. I miss her something fierce, and Bob, and on top of that there are the wonderful living ones who I just can’t see this year in person, and dearest of dear friends like Tony and Ali and Shane, and even just, you know, America.

This year isn’t going to get easier between now and the end of December, but it does look like next year may see some important upswings. Getting hospital staff the vaccines, for a start, and maybe starting to see this thing take a diminished toll. Swearing in a new, non-insane, non-narcissistic asshole president in January. Building on what we’ve learned while in lockdown, and seeing changes as the spring comes. Eventually seeing each other in person again, and hugging so hard it hurts. Okay, I’ll call it what it is – dogpiling.

I think I’ll rent a jet with what remains of my savings and just fly around to people I love and dogpile them. If you want I will also cook you a turkey and some gravy.

With oodles of love from your cooking correspondent –

I love all of this so much! Your dinner looks amazing and I hope non-foodie Ramon appreciated it! I miss you and I can’t wait for our dogpile!!!