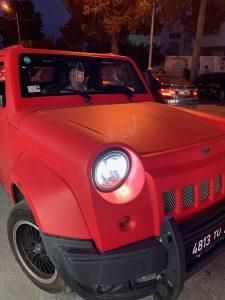 If there was a contest for “unexpected blog topics from Keri,” Automotive Interlude would surely be in the top handful. I have lived happily car-less since 1999 and if I’m ever the victim of a hit-and-run, the only thing I’m likely to remember of the offending vehicle would be its color.

I admit I like seeing the Fiat 500s – which are legion around here because Italy is so close – in their signature pastel colors. They remind me of Scrubbing Bubbles from the old commercial.

My real love is my bike, Philippe the Black. I’m afraid I don’t have a photo, because I zip around so fast it’d be impossible to get one. Or, because I can’t hold a phone and bike at the same time. Whatever, Philippe has taken me many, many unheralded miles around DC, and a very countable 490 miles in Iowa – in the Register’s Annual Great Bike Ride Across Iowa (RAGBRAI) 2003. (That would be a subject for a blog post – if I had pix. Ragbrai is a whole host of weirdness, and corn. But anyway…)

Ramon thinks about cars sometimes – more than I do, at least. In part it’s his environmentalism – he wants to make sure his next vehicle is on the right side of history. Diesel might have been a choice some years ago, but now it’s electric, or hybrid, or scooter, or…? We won’t be faced with this question for a while, though, so who knows what will have been invented by then.

Here we walk, bike, or taxi. We generally stay pretty close to home – though in normal times, of course, Ramon has an office to go to. Together we’ve taken just one trip out of the city, to the other coast; and once my friends visited and we drove to Kairouan and El Djem (the Colosseum).

The car-buying options are all so very unappetizing:

So we debate the options, can’t decide, eventually drop the issue, and keep going on foot and in taxi, then eventually we talk about it again. New? Used? Euro version? Pretty soon we’ll finish here, never having had a car, and go somewhere else – hopefully where we can also get by well without one.

New development: Tunisia is building its own cars.

But… a funky vehicle has popped up on the streets here: the Wallys Car.

How cool would that be? Support a very new Tunisian business, bounce around the side roads exploring and hiking, and it appears to come with a cat??? Oh, wait, no. But still.

The Wallys Car costs 15k-20k Euros, depending on the model. It comes in red, blue, gray and orange, at least. This model is called the Iris, and there’s another one that’s really like an old Jeep, with the bikini and hard tops and tons of colors.

The fiberglass shell is really weird – it looks like Batman’s costume from one of the early movies. Or something even cheaper, like the plastic case of a socket wrench set you might buy at Lowe’s. But it’s got to be light, right? Their website says they’ve been working on this for years, with the first prototype ready in 2016 – and just gone on sale this year. How cruel is the pandemic to this small business? But still, I’ve seen three or four driving around, and I kind of wish we were up for spending a chunk of money on a dream like this.

Any other Tunisian options?

Well the motorcycle is ubiquitous, like this little number carrying beach toys:

And who wouldn’t take a rainbow-strip Lada wagon? I could be convinced!

Outside our window, at least once a week, we see this massive ferry with big red swirls on its flanks, on its way to or from Genoa, Italy. So many people wanting to go to Europe – many from West Africa – have made their way here, or to Libya, and want to set out across the Mediterranean – in a raft, very often. It’s a cruel irony that cars can do it pretty freely but humans can’t.

It’s also ironic that North Africa didn’t close its doors to European migrants during World War II – there was always enough room here for escape from the ravages of a continent devouring itself.

I’m massively grateful for the ease of my life, including my education and my ability to earn a living. And my ability to travel – something I never doubted until the pandemic. These days, $3 and an American passport will get you a cup of airport coffee, but it won’t get you into most countries. That reminds me that my good fortune is not to be taken for granted, either.