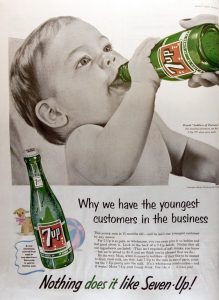 Want to get Trump out in November? Let’s show him for what he is: the pinnacle, the absolute apex (he’ll like that) of that most hated category of workers in the world: the grimy, lying advertiser. About all Trump can legitimately lay claim to is his disgusting ability to position sow’s ears as silk purses. He is the ultimate sow’s ear. (He’ll like that too. The very very best.)

It’s a longstanding, tried-and-true technique of marketing: whatever the weakness of your product, advertise it as the exact opposite. Back it up with bluster and look your buyer right in the eye as you lie. Trump is just now claiming that a 75-year-old man who was knocked down and left bleeding by Buffalo, N.Y. police was an “antifa” provocateur. That’s the recipe: outrageous claims, and lying with a straight face.

Picture someone holding up a can of high-sodium, high-fat, highly processed soup with questionable nutritional value. What does the ad say? They tout the soup’s healthy home-cooked recipe. Or sell cigarettes by touting the “freedom” they give you. Add flash bangs and domestic military incursions and you’re practically presidential.

The more egregious the difference between reality to the marketing campaign, the better: it should be no more and no fewer than 180 degrees from fact. Otherwise, it won’t work. Trump, for all his faults, is a master of this despicable format.

That is the marketing *magic* behind the way Trump sells himself and his movement.

In Trump’s America, the “Deep State” is vilified and the bedrock value of central governance – national protection – is twisted to appear as a sinister and macabre authoritarian overlord. The Koch brothers have been pushing that message even during COVID, and spurring on the anti-quarantine protesters.

And here’s some really scary Deep State: Trump’s latest abhorrence. (Read it here.) They’re sending unidentified cops to quell protest while the orange menace hides in a bunker. You don’t get Handmaid’s Tale-style dystopic reality from a president that plays by the rules, or believes in the system. You get this from an incompetent, insecure puppet.

“They had no name tags, no badge numbers and no emblems to identify which agencies they worked for.”

Who are these officers? Police? Military? Intelligence? “Agents”? They’re being sent into crowds of U.S. citizens who are peacefully protesting, or otherwise going about legally, morally and professionally unassailable tasks.

We already know Trump is an outsider president, but I would say he’s not even a politician – he’s an opportunistic and deceptive carnival barker, being used by extreme right demagogues to advance a slew of changes that are abhorrent even to generations of conservative leaders.

I’m flabbergasted, appalled, heartbroken, furious – much like the last 3.5 years. WILL WE GET HIM OUT THIS NOVEMBER? Holy moly, people, let’s do this thing!