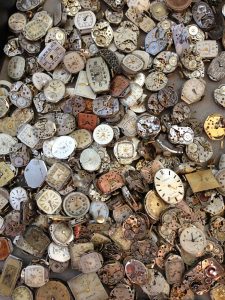 Consequence of watching the Great British Bake-off, I’m sure, but I have this indelible image of the flaky layers of the past three months collapsing in on themselves, and of losing their contents.

The confinement feels like compressed time and stretched time at once. We’ve rotated in such tiny orbits, how much could possibly happen here? At the same time, by virtue of it being so different and affecting so many lives, it has been momentous, and I can’t capture it: my net is not big enough.

Remembering the early days feels unreal. I charged all my devices all day. I asked Ramon if we should fill the bathtub in case the water shut off. Would the people who ran the water system be able to go to work? The imagination is a dangerous thing, which I saw immediately in Ramon’s face when I suggested this. I settled for a few more gallons of water in our larder.

(Side note: all services stayed on during lockdown. We had a twenty-minute blackout once, internet had some patchiness but in general was fine, and just today, they’ve shut down water for two days to repair a pipe problem. Guess whose bathtubs are filled now?)

When I think back to that time I think it was darker… which makes sense, in a way, because it was March – we had less sun, shorter days. I was hyper at times – taking classes, ticking items off lists, researching something to infinity and beyond, facebooking. At midnight each night I would check the online site for the grocery store, to see if a delivery slot had opened up. (I can say now, no, no slot EVER opened up.)

I considered whether to buy a ping pong table – very impractical, but it took up time, all that back and forth about whether or not to do it. Back and forth, back and forth, back and forth. (Heh.) And the sports store website had delivery times open. (Maybe they would pick up my groceries too? No, they would not.) What was so important in that grocery list? Nothing, really, except options. I bought whatever I saw at the littler stores near us, weird stuff, just to have something to work with.

There was so much going on, so much to do. And yet nothing.

Do you remember the first time you saw people waiting in line in masks, six feet apart, to go in the grocery store? So creepy.

I watched my little plants grow in my little indoor garden. Made lists of online resources, about the same time I learned there was nothing on line except long lists of online resources. Learned how to sharpen my kitchen knife from youtube, even though we have no whetstone. Held a “House Party” online with a group of amazing friends. Cleaned like there was no tomorrow. (That makes zero sense. If there really were no tomorrow, the last thing I’d be doing is cleaning.) Worried about Dad, and about us. The news got worse.

Anyone out there obsessed over the coronavirus news, like me? Reading endless articles about where and how the virus was spreading or not, what countries were doing or not, how leaders were handling it or not? Anyone else take their temperature more in the first month of confinement, than all the other times in your life combined?

My sister was very calm, and was even considering keeping to her plan to visit me. Still, when it became clear she wouldn’t be allowed to travel, she stayed calm and confident. She has lived in countries with far worse medical systems than what we have in Tunisia, and she is well acquainted with my standard-issue hypochondria. She helped me stock an emergency kit here, knowing that action is always better than inactive worrying. We were both more worried about our brother, who was at the time stranded in a remote Alaskan town. He got out not much later, mostly due to Kyna’s effective and targeted badgering.

She had, and has, much more reason to be scared than I do. At least no one pulled up in their car to my place of work, asking to have their nose swabbed. The funny thing about her is that being needed makes her hum along at a higher rate of productivity and effectiveness. She’s the race car, hugging the road, doing her best work when the situation is the scariest.

She also had a patient who was diagnosed with brain cancer, who did not want to die in Alaska, but rather in Nebraska, her home state. So Kyna accompanied her back there, three flights, each way, over two days.

Ramon being scared really threw me. His colleagues and friends in Spain were hit very hard, whole offices and teams of people in his agency, and one he was close to (same age, fit, strong, no prior ailments) died after several days in the ICU. News from Spain was so grim. Ramon is very even-keeled, and I’d never seen his hands shake on the tiller before.

Me, I’m used to my own trembling fears, which are no secret. Some of that fear just became background noise, like wind at a picnic. Rules were off, and uncertainty was the norm. An unused table in a corner became our staging area to disinfect things – us, our shoes, doorknobs, telephones.

Not much in the stores

There’s an odd quality to the grocery configurations here: there are lots of flavors and brands of a thing, like yogurt, in a massive dairy case. At the same time there is less variety in the dairy case: fewer cheeses, no Greek yogurt, nothing fancy. We’ve heard it’s because Tunisia has a thicket of import laws and duties: most everything is domestic. This definitely seems true for fresh stuff, which is strictly seasonal. No pomegranates in August, no blueberries in December. It’s a relief, actually – it’s easier to cook when you know just which ingredients you have. But with the coronavirus, store shelves looked really sparse.

Our dear friend Ibrahim made runs for us each week to find articles we couldn’t. Sometimes he couldn’t either. But he would bring, for example, five bunches of chard to make up for the utter lack of onions. So I’d painstakingly clean and blanch and cool and dry and freeze big baggies of chard, or peas, or whatever was around. We didn’t throw away anything, which is weird. Who among us, in our “normal” modern lives, hasn’t let a perfectly good batch of something go bad in the fridge? No way, says Corona-Confined Keri, not anymore.

When Ibrahim finally found some flour – four bags, in fact, making me wonder if he’d broken into a bakery in the night – well…

“Using the executive function,” said some article somewhere, keeps your mind occupied and anxiety can’t take root. Just to be sure, I also listened to books on tape while I cooked. And all the recipes I tried were new, if simple.

I have never fed myself well. Lots of dinners of popcorn, or wine & cheese & grapes. Traveling so much made cooking easy to avoid and it never bothered me. When I had to do it, say, to entertain friends, I found easy recipes and had a massive blow-out cooking day once every six or twelve months or something.

Starting to cook like I meant it, and like I wanted to… it was as if I suddenly – after half a century of being allergic to seafood – sat down and mawed on a plate of crabmeat or something.

I’m afraid that, with time, and with the return to “the new normal”, I’ll forget how phenomenal that all felt. There was elation in this weird new hobby in a strange new world. When the cream in my little blender started turning yellow, and looking like butter, you’d have thought I’d found the vaccine.

Blogging my way into your hearts

I also wrote a few blogs – something like 40 since lockdown began, which is about a third of the number of posts I wrote from 2011 to 2019. I looked back over some of the early ones, which were separated by no more than a day for the first couple of weeks. All that detail, all that frantic-ness – it’s like a map of my mind and movements. Then as I stopped blogging so frequently – I couldn’t think of anything to say – time seems to speed up and compress more. The pastry is not so flaky.

At some point I read a piece online that was one artist’s attempt (pre-COVID) to capture what she did every minute of every day for a set time period. It was horrible, like James Joyce but less intelligible or interesting. But I do want to remember what this felt like. I do want to hold onto it, without knowing why, and honor what went through me and us. I’m picturing a day I walked “geared up” to the market and on the way home, that silence, the near-lack of cars or people, the spring peace. I don’t yet know what it meant or means, but if I forget, then I’ll never find out.

I don’t really have anything to say except yes! All of this. Thank you. <3

Well I’m glad you took the time to reply. I like being agreed with! :>