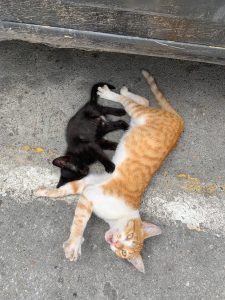 Well done. You are well on your way to a successful trip through this blog post. Today is Cat Day, and I’m going to show some photos and ask funny (ahem) survey questions. Hey, the NYTimes says people are doing more surveys these days (because they are bored out of their minds), so please indulge me!

Why not? Kittens are universally and unanimously regarded as the cutest of the baby animals. (No? You disagree? Well if you like smelly little hedgehogs that’s your business.)

Cats here also pose prettily in front of doors and gates – all the damn time. I’ve taken a bewildering number of pics of cats in front of doors, gates and other sites because they look so sweet and poised there.

Oh yes, they stop in the street, hide in the greenery, wait under cars at the market, beg for petting, sell drugs on street corners. They’re dumpster divers, yowlers, baby protectors, scooter riders, and utter charmers.

Don’t you just love them?

I’ve got constant companionship everywhere I go here. I’m 100% sure they’re 90% of what has made me so happy here in Tunis.

I snuck in some pics from my trip with Sarah to Carqueiranne, France – but only because it was cat-filled as well. Those are the ones with Sarah, an orange wall, or both.

I often find clumps of multiple cats – laying all around each other, sometimes a momma cat with kittens, and sometimes more like a gang.

The bodacious cat clumps beautifully arrayed above are sort of a spring phenomenon. But over time there are a lot who disappear, which reveals that their lives are a lot more precarious than I initially guessed. Yes, it’s true – people take care of them, feed them, even when they’re afraid to go outside – the cats are fed.

But the cars, man, it’s the cars. My sweet little Mogui, who I’ve been feeding for months, showed up after three days’ absence with a broken foot. Her ankle looks charred. I don’t know how long she’ll make it, and my heart breaks when I see her. It doesn’t help that the intermittent rain we’ve had the past few days has left her looking like a bedraggled little rat.

Here she is from happier times, with her brother:

I stopped seeing the brother – the gray and white fellow above – late last year. A few months before that, their mother, Lucia Vinny, disappeared. Precarious is definitely the name of the game here.

I’m genuinely scared to pick up Mogui – many of you know of a terrible string of events following my sister’s attempt to immunize a feral cat. (Massive infection, couldn’t work, hand the size of a baseball glove, long recuperation period.) I don’t have a cat carrier but I will look for one through a Facebook expats page.

In the meantime, I also want to cheer everyone on for the pets they love and take care of!

And of course, in all her chubby glory, my own Raya, who is loved and cared for daily by her Uncle Tony alongside Sox: