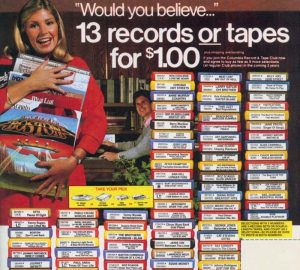 We’ve all seen the Facebook game where someone is “nominated” to load up ten (or twenty!) albums that influenced them.

Does InaGoddaDaVida count? I’ve never forgotten the album cover, though the music is not very memorable. Like with Smoke on the Water or most of Bachmann Turner Overdrive, I can’t remember much into the song.

In 1979, the prevailing album challenge was a subscription to the Columbia House Record and Tape Club. I pored over the lists of albums in the ads that came out in the Sunday Parade magazine, taped my penny on the order form (seriously), and filled in the little outline boxes with carefully written numbers. I was not very cool, so it was crucial I get cool music. But what was cool music? I either had to imitate my brother’s music choices, or those of my peers. Catch-22! I don’t think I ever successfully threaded that needle.

Within a short time, however, I was placing the needle gently on the first albums I’d ever acquired on my own. Here are the ones I remember:

I got albums the first time I joined the club – back before anyone called them “vinyl.” I joined the club again when I was in college, I think, and got cassettes. I see in the ad that 8-tracks AND reel-to-reel were also possibilities! Now that I’m perusing these old ads with their list of albums, there were some bands that were ALWAYS on there, constant through time and space, as if their albums wouldn’t sell any other way… Like:

I bet you can still find these names but only in your major truck stops, where tall teetering racks of CDs promise half-asleep travelers something both familiar and diverting…

Then the fun began

Every month Columbia House would then SEND you an album of the month, without you ever having to order it – you had to actually stop them from sending it each month or it would just arrive and you’d have to pay for it, or send it back, which back then was a process nearly as bad as paying for it.

Plus they sent 114 mailers each month offering you various other selections, because the deal with this club was that you had to buy 8 more albums over the next three years. I can’t imagine how buying 8 albums, over three years, combined with the twelve free ones I got, plus the cost of preparing and mailing all that crap to me all the time, was a profitable proposition – but apparently it was, because Columbia House didn’t go belly up till Napster finally nailed its coffin shut.

Fog and rain, then sun, then RAIN, then tenuous sun… I’m grateful today for eventful weather. Soon it’s going to be hot here, and I’m terrified about that, so I’m soaking in as much as I can right now. The waves are noisier now than in summer, when they’re simply flat and inviting. The rain gutters are spilling out torrents. It smells wet and clean, and the breeze from the window is almost too cold. Being spring, though, the flowers are also starting to come out. Their colors are all the more stark for being under a gunmetal sky, like they’re scared and have put up their jazz hands. Gunmetal skies are very intimidating.

Also, Ramon is a sweetheart. Very thankful for that.

Postscript: Guess which numbskull got stuck under a tree during a thunderstorm? Not half an hour after waxing poetic about the lovely Tunis rain?