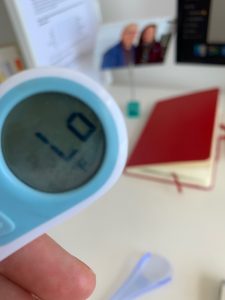 See how I know what day it is? This day will go down in history or something… The Day I Overcame.

So many thoughts bursting in my head this morning – I think I slept well. That’s a miracle considering my bedtime surprise last night. I had a headache all day that wouldn’t go away with aspirin, and I was getting quite scared, so I took my temperature.

When could I have gotten it? What precaution didn’t I take? How bad is it going to be? Oh no oh no oh no…

(Transcription of my thoughts last night as I misread the digital thermometer, which lacks one of those simple but perfectly effective red lines to tell you when you’re in trouble.)

I sequestered myself from Ramon, who was already sleeping. I got my favorite cold remedies from the closet, and took myself into my office, which is also our guest room (and has a bed).

I steeled myself. Maybe I would be one of the lucky ones and just have symptoms at home, with Ramon bringing me clear soup while wearing gloves, and then the fever would break and I would have the antibodies and could help people.

I figured I’d better take my temperature again, to be sure. I have been having hot flashes these past few months, so maybe it was just an anomaly, a bad measurement, an outlier. I know all about that sort of thing, since I work with data and statistics and stuff. But alas, same result!

Thermometer, speak to me

I noticed the thermometer flashing the word Lo – it has a very small screen, of course, so it can only tell you two letters of information at a time. That is a pretty strict limit – what else could it say? I guess, Hi, which would be… friendly, if weird. The thermometer might want to greet me, great selfless savior Keri, with a wave and a dose of good cheer.

Or maybe it would say Ya, as in “Yeah, you’re sick, babe,” or No as if to say “you’re not gonna make it.” Or Pi, which would be understandable if also incomprehensible. Maybe Be, as in, “Go and do what you’re gonna do, doll, ’cause this might be your last.” I’d be really pissed if it said: Ad – is every screen in the world destined to become advertising space?

Ah would be ambiguous: good, like a pleasurable sigh, or bad, like a dawning realization. It would be superfluous to say At when @ would do – surely a digital thermometer would abbreviate? And in that case, would Us mean “We’re all in this together,” or “Made in the USA”?

I would be really upset if it said Ha – no one should have to take insolence, especially not if they’re sick and not from a digital thermometer. Ex would scare me – as in “Ex-parrot” and pushing up daisies and all that. Om would be an obvious good choice, inspiring introspection and calm breathing; Xi could work the same, if I was sure its pronunciation was (as I suspect) “Chi.” Od would just be insulting, and On or Of would make me wonder if the thing was shorting out.

I would be happy with Fe, which means “Faith” in Spanish – like, “Hold on, girl, you are gonna make it.” That’s the kind of message a thermometer reporting bad news should be imparting. Um would be frightening in equal measure. I would also not want to see Op – like, this is gonna take an operation to get you back on your feet – nor Ox – as if it were calling out for precious oxygen.

Ma or Pa would be an ominous read as well, implying a need for my parents that would be, of course, most acute if I were… most acute. Za would be completely on the other end of the scale, since it would (inexplicably) refer to that ill-advised 90s American teenager attempt to shorten the word pizza. I wouldn’t want to see Mm or Hm any more than I’d want to hear such uncertain syllables from my doctor. Go might make me try to catch one of the expatriate return flights the U.S. Embassy advertises here on Facebook (annoyingly just a day before they GO anywhere.)

I would read Ho as offensive, for multiple and obvious reasons. There’s always the option of Sh – to quiet my whimpering, calm me, as if in Momma’s arms. Or Up, which could be inspiring if my sister was encouraging me, or scary, if from a drill sergeant.

Would Yo mean I’m going to go back and forth for a while? Or So that the thermometer awaits an answer from me? Would Or represent the thermometer’s fundamental ambivalence or its cocksure certainty that one of two options was bound to play out? If I saw Me or My would that refer to the thermometer itself, or is the thing a neutral space for my own musings (which this blog post would suggest – oooh, how meta!)? If it read Oy should I freak out that it’s more serious than I thought (“oy vey iz mir”) or take the laugh that comics who speak some Yiddish always inspire in me?

Po, I think, could usefully be interpreted as Winnie the Pooh, who would certainly be a comfort, as a Bear of Little Brain – and at least it’s not Ee, which would immediately make me think of that doomsayer, Eeyore. Bo – as in Duke? what a wretched childhood I spent watching terrible television – he would be no comfort. He would imply a Christian comfort I don’t grok, though there are obviously markets where that would provide some strength. I’d take Mu to mean I should crank up the tunes and dance, for good or ill.

Around about 1:00 a.m., I took my temperature again, and realized that 97.9 is actually LESS THAN normal ol’ 98.6. I took it again before I could finally calm myself down enough to go to sleep, and it hadn’t changed and I was not, in fact, dying, (any more than we already all are, yeah, thanks, Pollyanna). My fear had scared that headache right out of my head.

And then I woke up on Easter Sunday and took my temperature again, to find it right at normal. Ramon was kind of laughing at me for what I put myself through. (“Laughing with me,” yeah, I know.)

This is to be a new feature on my blog posts! Ready, set, gratitude!

I am grateful not to have a fever. Really, really grateful.