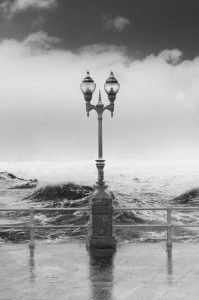 Day One. The confinement begins. I find myself oddly… calm. Is this the storied one that comes before the storm?

Anxiety is weird. I am a worrier, with more than my share of scary stories pinging around in my head at a given moment. It’s like a creepy carnival fun-house up in there. Especially when I’m trying to drop off to sleep, I can imagine that the Advil I just took was tampered with (which must be a leftover from the Tylenol scares when I was a kid) or that the airplane landing overhead is off course and going to crash into my apartment. No, you really don’t want to know what I’m thinking. 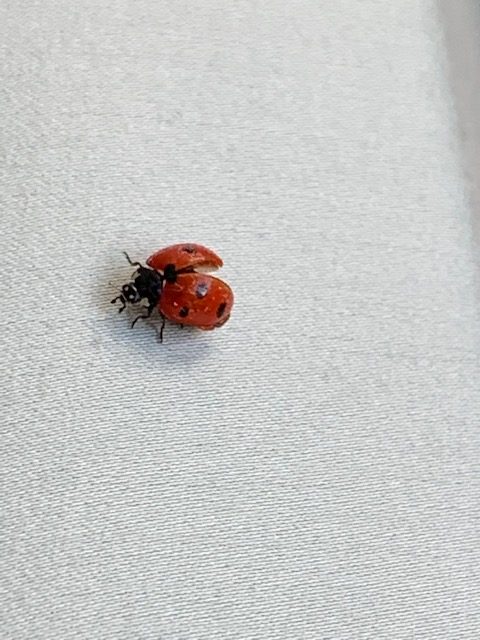 Have a picture of a ladybug from my bedroom instead!

I tell myself lots of things about my anxiety. I say it’s because I was traumatized by my parents’ completely unexpected divorce as a kid. So now I try to predict all the bad things that could happen, so I won’t be caught off guard. I say that my anxiety makes me take precautions, but what precautions could I take against the airplane, or the bad Advil? I joke that anxiety is a big part of what makes me a writer – because it is imaginative, right? But that’s just a hop-skip-and-a-jump away from saying all real artists are addicts, or crazy, or whatever. Anxiety no more makes me a writer than it immunizes me from harm.

So when I say I’m calm in the midst of this coronavirus crisis, that’s saying something. I’ve been meditating the past couple of years, which undoubtedly helps. I’ve got a rock beside me in Ramon, who feels like home to me, and who takes concrete steps to keep us safe – like agreeing not to go to work tomorrow. I haven’t been on a plane in a full week, which is something like a record. So there are some points in my favor. 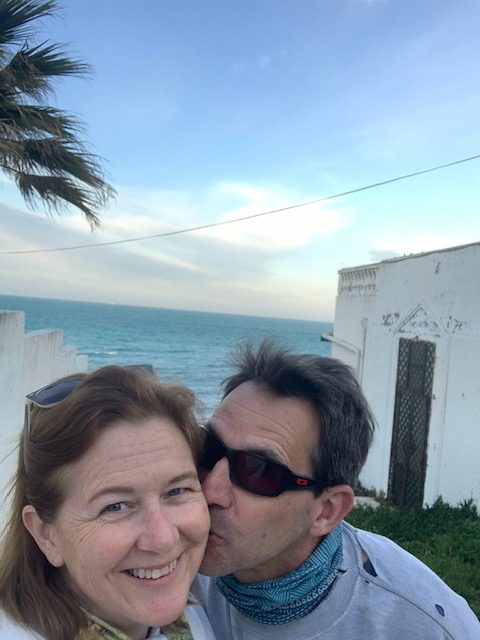 My rock, kissing away the worries. Also, he updates me regularly on infection rates.

That’s something else I tell myself about anxiety: that I’m calm during the storm, though I reserve the right to a full freak-out later. I also remind myself that I have a strong rational side (despite the flights of negative fancy) and as I watch and read the news, I see what I have to do to keep myself as safe as possible: hand washing (check!), not touching my face (oh yeah!) and social distancing (I’m there!)

And I make plans. Lots of plans. Detail-level plans. Like, if I’m out with Ramon at the grocery store and I get the urge to touch my face, I will rub my face on his lower back. Why? Because people probably haven’t touched him there. (And if they have, we may have a larger problem on our hands than viral infection.) (I probably have not yet sufficiently considered how physically difficult that will be, or what Ramon’s reaction might be, not to speak of the looks I’d get from other people.) Or, if I need to go to the doctor, I will ride in the taxi with my eyes closed, especially if the taxi driver coughs. Hey, it worked in the hallway of the hotel where I was ten days ago in Bangladesh. I only bumped into walls like twice. 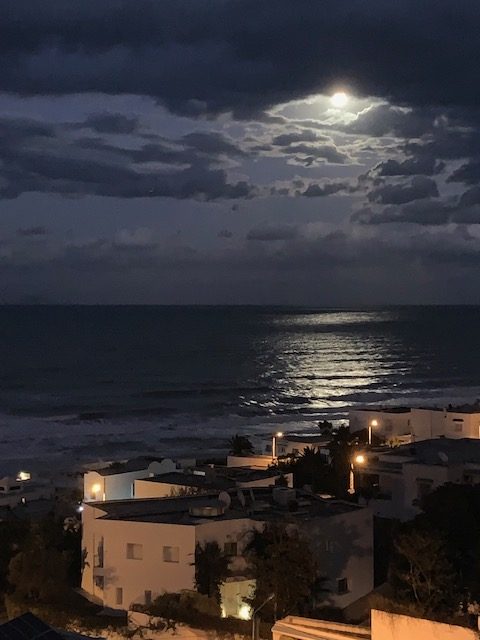 No anxiety here. Just the moon and the sea.

One thing I’m anxious about is that I’ve already cleared out my inbox and done most of the things on my to-do list. I’ve cooked a quiche, baked cinnamon rolls, made a pot of chili, and chopped up an immense salad. Which brings me to my follow-up question, one I’ve not ever worried about before: what will I do when I get it all done? Second, it must be considered, if it was this easy to get to the end of my to-do list, why didn’t I do it a long time ago? Like, I’ve even called the cable company. Ick! The absolute most-procrastinated item on my list. What next? Will I have to change my bank account and email address, just to give myself something to do? I don’t want to accidentally fall into Lazyland, because I’m really anxious I won’t make it out of there. 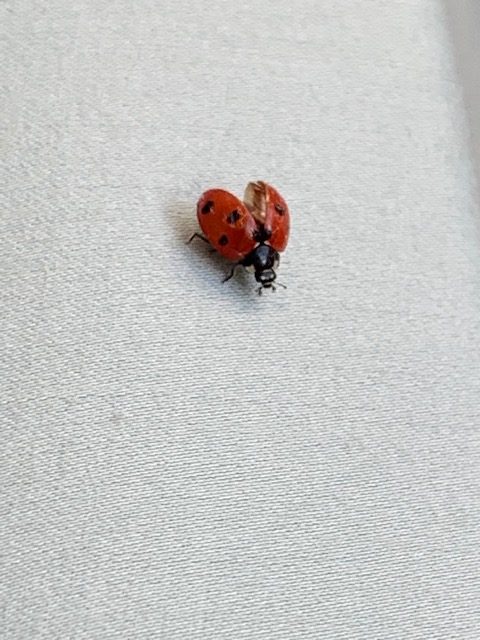 One more look at the ladybug won’t hurt.