Notional zebras and the big red bus: stories from an evaluation 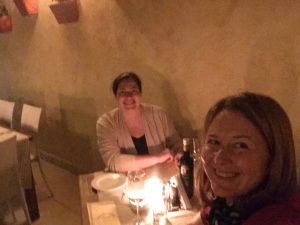 Two months in Nairobi, though it seemed like more. It’s bad form to say so… but driving around Nairobi never put anyone in a good mood. Mostly it puts you at a standstill. And how come I was always on the side of the car with the hot sun streaming in?

This means that what I saw the most of was exhaust pipes, and people stuffed in small buses, just trying to get home. But when I go back and look at my pictures, they’re not of depressing traffic scenes at all. Instead, I see my fun and brilliant team members and buddies:

Mostly what I did was interview people: those who were connected to the project being evaluated, and those with an opinion about what the project has done. Our team did 250 interviews between Kenya, Uganda, Tanzania and Rwanda – and we’ll add South Sudan before it’s done. Another 200 or so interviews will also come from people who may not have known the project was even happening, but might have reaped a benefit: those who walk or bike across a border carrying two branches of bananas, or very small “export-ready” entrepreneurs who were helped to sell their coffee or dresses or shea butter creams to neighboring markets. Also IT start-ups, leather tanners and bean growers – the bulk of all of these being women.

Now I know what it’s like to be a flipped coin.

It is the biggest and most complex evaluation design I’ve ever taken part in – much less led. So I have moments of panic, and moments of triumph, almost every day. Now I know what it’s like to be a flipped coin. I worked every day, weekends included, and some workdays were 12, 13, 14 hours long. By the end I was in trouble – sleepy, short-tempered, mentally vacant.

The first report deadline is mid-April. Three more reports follow. Whenever we’re able to get all these reports in and finished, I think I will take whatever remains of the year off.

Still, by the look of my camera roll, most of what I’ve done in Nairobi has been eating:

I look so cheerful!

Never interview when you are stale, tired, uninterested.

I’m pretty sure more lessons will make themselves clear in the coming days as I decompress. In the meantime, Ramon and I are going to the market for some veggies to make a monster salad for lunch, then to play volleyball on the beach with my Valentine’s present. Hugs from Tunis!