Oxford for a thousand, please 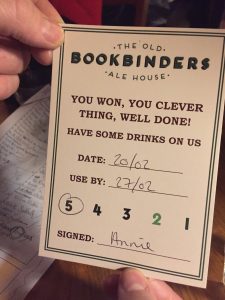 What a lovely ville is Oxford! Impossible not to like the people, particularly this crew who invited me to their team on Pub Quiz night at the The Old Bookbinder’s Ale House : (Team, I did the best I could with the red-eye, but sometimes instead of filling in, they seemed to get white and empty, decidedly Poe-like. Especially Poor Jillian… I seem to have erased her eyes altogether. I was only making it worse so I had to stop.)

Here’s our scorecard, which earned the team a round of drinks at the next Pub Quiz! This, despite my moronic answer to “What two states do the Smoky Mountains border?” (It’s Tennessee and North Carolina, NOT Tennessee and Kentucky. Embarrassing!) And then there’s Cezanne, the cheeky barmaid (is that redundant? or sexist? I mean neither) who brought me a piece of sole in champagne sauce that was t-d-f. They’ve got a French chef, I’m told, mixed with  an English sense of humour. “What a Load of Crepes” is one section of the menu. The High Street and environs are full of shops and restaurants, people and buskers and dogs and bikes, bikes, bikes. Good Lord I’ve never seen so many bike riders in all my days. And the bike parking is… every piece of anchored metal has between one and 31 bikes attached to it. There are day-rent bikes, minute-rent bikes, kid’s-bikes, tall Dutch bikes built like a sturdy Volvo and all kinds of lithe little racing jobbies.

I rented a bike myself for the week, and tootled back and forth to the office along the Thames. The river, in fact, had a good deal more traffic than the trail, these giant water-bug-looking things with long black legs and booming, rhythmic voices: (Click the pic for some video…) Back on the High Street, I was startled to hear some mountain blues (“The Vigilante”) outside the fancy new shopping mall, and I tossed the fellow a p-p-p-ound into his guitar case.

The dog (shown below – yeah, I had to look twice too) didn’t even move when the coins bounced within an inch of his (previously invisible) nose. Check out his earphones. I wonder if he’s listening to meditation gongs or bird chirps. “Anything but the tambourine,” he might say. Everybody gets a fez in this hilarious Lebanese restaurant (Le Comptoir Libanes, which I was inordinately proud to translate on sight.) It is half Casa Bonita, and half Andres Carne de Res, thoroughly dipped in hummus and sprinkled with sumac. But the best are the photoshopped fezzes. And last but not least the aforementioned waterfowl.