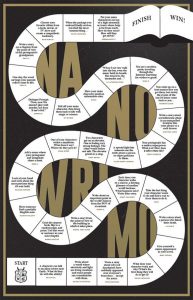 National Novel Writing Month is about to begin. This annual event pits you against your inner editor (troublesome fellow: more on him below) to write 50,000 words – the equivalent of a novella – in one month. Millions around the world have attempted it; hundreds and hundreds of thousands have “won” by getting to 50,000; I’ve been in the winner’s circle various years, and this year I’m going to make it again. Care to join me? (Sign up here: NaNoWriMo.org) If you sign up, “friend” me – I’m Keruin on the site. Then, just remember: you, too, can write a novel. That’s what these folks are all about.

Don’t worry – your novel doesn’t have to be perfect. In fact, it’s better if you just manage what’s known in the industry as a

as writing goddess Anne Lamott puts it. Otherwise, you slow yourself down. Literally. Just. Puke. It. Out. Already. 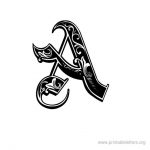 If you think too much about Art in November, you’re bound to stifle yourself.

I have a fledgling idea for my novel this year, which I will share as it develops. My niece gave it to me, like a tidy little gift, without even realizing what she was doing. It’s a little bit silly, which was what drew me to it. It’ll have suspense, car chases, flying, maybe sword fighting and battles to the death with iocaine powder. But I know from NaNoWriMo experience that the start is easy, compared to the middle of the month. I’m going to need your help to keep my writing flowing and unpredictable.

So what do I want from you?

Well, if you’re not going to be neck-deep in your own novel, how about putting the “crowd” in “crowd-sourcing”, for mine? I’ll take any and all ideas, and incorporate them in this new masterpiece.

You can send a funny name you thought of, an image or meme you liked, an idea for a story or a scene, a phrase, a palindrome, an imagining, a fear, a wish… anything that strikes you. I will find a way to incorporate it, in whole or in part, into the narrative I’m writing for NaNoWriMo. You get credit if ever the thing gets published (like on this here website!). You will also have my undying affection, plus immortality, all for telling me what shape your yogurt resembled this morning! Or, literally, whatever!

Of course I’m not going to use anything bigoted or mean-spirited. If you’re reading this, you already know that. Also, nothing on our Moron-in-Chief or his evil friends.

About that inner editor I mentioned:

Everyone has one: like Freud’s Superego, who sits on your shoulder and tells you what’s right and wrong so you can get along in society. Everybody needs a few rules. It keeps things in line. But in the act of creation, too many rules can smother the flame. You’re thinking about the grammatical structure – whether or not it is “correct” – instead of about the pirate ship or the romance or the third moon of Saturn that you want to write about. Or you’re thinking your pirate Saturn romance isn’t plausible. WHO CARES? It’s fiction for a reason! You can polish later. Right now what are we doing? We’re puking it out! Yay!

I was thinking about my own inner editor this morning, and what he is like. Yep, it’s a he, I don’t know why, but he is masculine. Actually, he’s a hammer. That’s my image, and I’m sticking to it. Here are some tactics I’ll use to keep him off my back during November:

There are certain people – cousins, for example, and people I’ve met on overseas assignments, and U.S.-based weirdos, who I expect to chime in with their suggestions on this thing, because you’re strange, you think odd thoughts, and you love me. So… let’s get cracking!

Come swim in the novel pool with me!

And – hey! This is the inaugural post with my New Web Design and layout and all that lovely stuff. Thanks to Bakerview Consulting for awesome, dependable service as well as splash-bang-kapow moments like this new design, using WordPress Smoothie Theme.