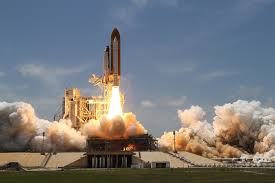 A spectrum – red, yellow and green – illuminates. A traffic rainbow that means turbines are operational. A buzzer squeals overhead: propulsion jets are ignited, pushing 100,000 pounds per square inch against the launch pad. A faint, buffered remnant of that force shakes her seat. She yanks her chest strap tight and calls “Check!” from her diaphragm into the helmet mike.

Vital signs: heartbeat 15% elevated, inside normal range. Co-pilot at 28% and rising. She messages the second cockpit: Breathe slowly. The propulsion buzzer is louder there; his seat is closer and less insulated. Her pre-programmed message reminds him that the vibrations – heavier than hers in the nose cone – are normal.

“Roger.” She checks wind estimates: 31 knots, south-southeast. “Adjusting thruster package” she calls out, so the tower knows she is taking wind into account to maintain orbit trajectory. The buzzer becomes shriller…

Her vitals remain within normal range; the co-pilot has steadied. Both facts make her feel a little cocky. She sends another pre-programmed message congratulating him. She sees the results of his machine checks and knows he can, at least, complete his tasks. She approves his checks and moves on to her own.

Her eyes sweep the indicators and she counts off her machine checks. “Oxygen… Check. Coolant…” She is remotely aware of the sun edging over the horizon, sending a single sharpening ray through the cockpit hatch window.

“…Check. Seals… Check.” It is time. She initiates decoupling and the scaffolds release the rocket from their embrace. Creaking metal joints and hydraulics…

…mark the separation. The propulsion unit buzzer dominates the cockpit soundscape. She steals a glance at the co-pilot’s vitals: blood pressure rising. His “fight-or-flight” response. She changes his screen to a photograph of the beach scene where he proposed to his wife, and…

…tunes her headset: his breathing is rapid and shallow. “Breathe with me, Will. In…” A nervous wheeze…

“Now push all the breath out.” His vitals stabilize on her screen.

The rocket takes its first wobbly step up onto the heat and propulsion of its jets. The rocket steadies, triggering the final disconnect from the launch pad. The hydraulic whimper sounds already far away. She ignites all remaining thrusters in one sweep of her hand and feels the…

Liftoff. Houston, we have liftoff.

…4,000,000 foot-pounds of torque push against the bounds of earth. She blinks, feels her own adrenaline as if it were rising in her throat, and checks on the co-pilot. He’s still quite alive, but he has passed out.