Where are the female hipsters? 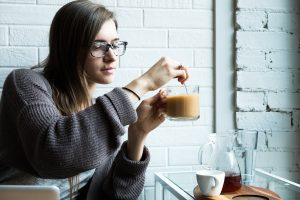 I don’t get it. The hipster thing here in Madrid is just massive – without even going into how many beard-trimming, fade-shaving, exaggeratedly side-parting, bangs-gelling barberias there are, I also walk past (and sometimes into, thanks to Ramon) shops selling the most bizarre “fashion” – steel-toed work boots. One guy working at such a shop told us that the boots he bought were so expensive that it was a logical next step to DHL them to the U.S. for re-soling. “You can’t break ’em, though!” he swooned. Well, no, they’re steel-toed! They’re supposed to be worn on construction sites and in workshops. Who would wear them for fun? Hot, heavy, meaty, clunky… protective gear. It’s as if astronaut suits suddenly came in vogue. At the same store, the jackets would look more at home on my brother as he scooted on his back under a snow-grooming machine to tighten up the diesels or whatever it is he does under there. To think that someone might go in Kyle’s closet and come out with an outfit for Friday night in Madrid… well, it’s funny-peculiar, is what it is. I see one of these guys strutting around Madrid and all I can think of is… Uncle Paul on his way to fix an air conditioning unit.

What’s weirder than that? The complete absence of the female hipster, that’s what. Can anyone tell me where I can find one? Here in Madrid it’s uncanny how many man-bunned, square-bearded, suspender-wearing men there are, walking around in cuffed tight pants, v-neck t-shirts, tailored grandpa sweaters, and some version of “just-so” scuffed worker boot.

But the female equivalent? What even is that? What constitutes a hipster mama?

I went online to find out. (There’s no encyclopedia in the world that could help me… but WikiHow has a very… cute sort of instruction guide for clothes, accessories, and attitude for hipster girls! I found the idea that hipster girls collect pins to put on their backpacks really instructive.) There was a pinterest page, where I see that “girl hipster fashion” absolutely requires Chuck Taylor sneakers. But, I wore those – exclusively, including with skirts – twenty-five years ago. Ahead of the curve, ahem?

I found a website for an online magazine called Complex, from the UK, with this really revealing photo about hipster dressing (click on it to go to the webpage)

Because I would NEVER have known these people were hip had this site not told me. Maybe it’s the cartoon leggings that do it. This same article also asserts that you, as a hip hipster with a wardrobe that combines vintage, “pops” from designer labels, and streetwear snapbacks (whatever that is), you should, and I quote, “leave those Zara scraps for the peasants” – emphasis added.

Holy crap. Maybe women don’t even want to be hipsters, if it makes you a) look like that picture (stretchy white lace headband, anyone?) and b) sound like a conceited poshy tool.

Another website concurs on the poshy, brand-named, high-dolla look that makes a hipster hip: there’s a Tory Burch clutch in one of the assembled outfits. Those are like $20,000, right? The site also suggests a “mannish” look in order for a girl to be hipster: bow ties, military jackets, suspenders, bulky burlap messenger bags, little curly mustache appliqués. But that just sort of makes my point that hipsterism is a thing mostly for the menfolk.

HuffPost asserts that flannel shirts, bucket hats, teensy cut-off jean shorts, Converse (Chuck Taylors, natch) and bright beanies a woman’s trend do make. But I’m not really sold – if you look at the pics of the thirteen unfailingly hipster clothing items, you can’t quite imagine the person in one outfit wearing… any of the other outfits. So there’s not a coherent… thing. Like flannel shirts – an integral part of Seattle grunge and heroin chic – can you imagine the flannel-shirt-wearer, tomorrow, wearing the wide-striped overalls the next day?

In the fewest possible words, this not-really-a-fashion women’s hipster aesthetic is neither sleek nor together enough to fit with hipster men, who are so careful about every detail. As Ramon himself reminded me, you most often see hipster men with other men. Not because of sexual orientation, but because they’re checking out each others’ glasses, boots, belt buckles, and other sundry accoutrements. This suggests… something else.

The guys wanted a style all to themselves this time. That’s okay! Maybe all that manly lumberjack chic makes ’em feel good. Lord knows, women have had some… odd phases. Shoulder pads, Stevie Nicks, At least the guys aren’t assembling at football stadiums on non-game-days to howl and stuff.