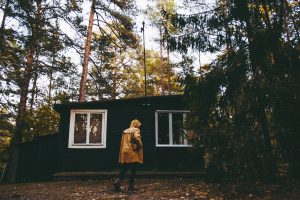 April hoisted her lumpy backpack up on her bony shoulders. It should have weighed more. The dehydrated food packs she’d selected and tallied at the surplus store were gone, save a few empties she’d retrieved from around the campsite. She’d keep her dignity and take them with her. It made her feel superior to think that when she next had something to cook, she’d burn them in the campfire.

Stupid, stupid, stupid, she admonished herself. Don’t leave exposed what you can’t afford to lose. A tear made its way down her cheek but was already cold and solitary by the time it reached the bottom of her jaw. Nothing like a rumbling stomach to staunch emotions. She pulled pine needles off a nearby tree and ground them between her teeth, swallowing the bitter juice like a punishment. She imagined Chinatown.

The sun was as high as it would get in the pale gray sky. Contrails from fighters and surveillance traced the sky and reminded April to stay under tree cover. The stuffy brown air also served as cover, as it tended to sting the drones’ sensitive eyes.

A junction sign announced the Silway trail, and April took it. She couldn’t continue on pine needles. Outside town, she sat her pack down behind a boulder, set up her lookout, launched her own drone and waited for inevitable nightfall.

April was both rabidly opposed to surveillance and a sneak par excellence. The boulder and her camouflage gave her protection, but stillness gave her sight. Once the echoes of her arrival had dissipated, no animal could detect her and no one in Silway could imagine the human eyes following every motion. She became the lichen on the boulder, the elongated dapple of the evening sun.

A little technology didn’t hurt either. Drone data lit up her phone with a dull gleam, giving instant information on the town, the obstacles, and the one safe house where she could get succor. There were certainly others, but they weren’t on the Net – surely for fear of hacking.

By the time the sky was completely dark, April had memorized the movements of the local watch, identified their weapons, and planned her timing and trajectory. The Children’s Brigades of these little towns took protection seriously, so her visit would have to be silent, effective and lucky. But her starvation enemy was at least as deadly – and twice as cruel – as the ones that would liquidate her on sight. She eased herself off the boulder’s curve and repacked her pocket drone.

After the Brigades crossed and parted, April walked straight through the main square, smelling the Astroturf chemicals and the factory waste that ostentatiously leeched through the main square before reaching the water table. The white fences facing the square were mesmerizingly identical, as were the flickering blue lights in the house windows, repeated endlessly up and down the street. The President called this show the Entertainment, and it was required. If anyone looked out a window during the program, they’d see April and call the Brigades. But being curious was never helpful. That was the essence of small town living.

April dropped silently into the tunnels in front of the safe house. She rolled lengthwise out of the earth-covered elevator into a cavern with tenuous lighting. Blond men surrounded her at once. Their eyes were angry and greedy while they frisked her. No one spoke, least of all April. In the corner a hairy mercenary, who she knew to be called Bo, wept and struggled against his restraints. Beside him were stacked boxes of MREs – “meals-ready-to-eat.” The thought made her salivate, though the likelihood of eating was as remote as escaping the four Trumpets.

After fruitless interrogation, the Blonds were permissed to take April into LA. She sensed their excitement. Silway was a fine place to raise a family, as they would surely say, but living there must have been as mind-numbing as being a flag worker. These were the ones employed by the tens and hundreds of thousands to do factory tasks – like pushing a button at intervals on a machine that sewed flags. No one wanted that life, or the small towns themselves, but objection was suicidal.

The Blonds would take out their anger and boredom on the official prostitutes and the extras hired to be in the LA bars. April let a little bit of her hate seethe out, filling the room around her like a gas. It was time to travel, and she was told to get dressed.

One of the Blonds handed April her boots, just as they were when she was strip-searched the day she climbed under the safe house. Still with that blade tucked invisibly between the last and the sole. Blond 1 was dead before he could bite into April’s hand, which had been stuffed into his mouth to silence him while he fell. Blond 2 failed to raise the alarm as well, because no air could pass across his slit throat. Bo the mercenary helped with Blond 3, who was masturbating to mental images of the LA brothels he would soon have visited. Blond 4 was surprised to see April stagger out into the sunlight alone, her hands manacled behind her back, until he got close enough to realize they weren’t manacled at all.

Bo and April split the MREs into two sacks and parted: Bo his way, and April hers. In the early morning light she skirted the town’s edge to retrieve her backpack, loaded it with the MREs, and headed back up the hill away from town, in search of a little clean air. An outcropping gave her a last vantage over Silway, and she swept it with her binos. The Children’s Brigades patrolled the town, the “citizens” walked to the factory to press their buttons and earn their paycheck, and the safe house emitted white-grey smoke as it burned.

It was going to be a long way home.

What I did on my not-summer vacation - Keri Culver