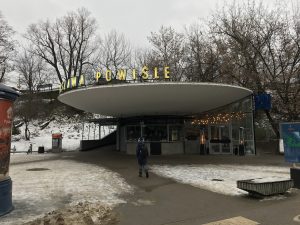 How lovely to hear Chopin in the park, at the touch of a button! The benches have really good acoustics – you can click on the pic to hear a piece from a good videographer called Happy Data Scientist (I’m not kidding) on YouTube.

This is the Chopin memorial in the park, where concerts abound in the summer months. The statue is of a weeping willow shading Chopin, but it’s also a hand, according to the guide, like Chopin’s hand on the piano keys. I looked for Warsaw’s famed milk bars – where people could get inexpensive meals that included at least dairy products during the economic depression of the 1930s or the meat rationing of the 1980s. This odd Jetson’s-shaped diner was the closest I got to one. You couldn’t beat the prices and the selection, or the mix of clientele – students, oldsters, moms with prams, and at least one disgruntled journalist. Warsaw in January was chilly but generally sunny. On a tour of the palace gardens we got the trifecta of wildlife – peacock, mandarin duck, and red squirrel (all red squirrels are known as Basha, according to the guide, “even the males,” so you can call them. She demonstrated with a random redhead and danged if he didn’t respond to the name just like she said. The most noticeable quality of the tour was the nonchalance with which the guide spoke about occupations, privations and uprisings. “Here is where we used to wait in line,” “Here is where the Nazi leaders set up their first offices,” “Here is the former Soviet communist headquarters [now home to a Ferrari dealership and Montblanc pen shop.]” Situated between Germany and Russia, Poland has been a prize for warmongers, enriching foreign coffers and suffering barbaric loss of life and freedom. Architecture and public art are transforming, but there’s still big chunky Soviet-looking buildings and old signage that put one in mind of authoritarians. Ahem.

This contrasted with the contemporary perspective of a chatty taxi driver who took us to a restaurant one night, who talked about the doors opening to Poland now, the economic hub it could be for the EU in its gaze toward the East. The anniversary of the liberation of Auschwitz was upon us while I was in Warsaw, and the Jewish Ghetto monument (at the Polin Museum, definitely worth a visit) was having a memorial service. As the guide described the Jewish uprising, my brain was newly attuned to what it might feel like for your government to repress you, to the point of outright murder, and how a nearly hopeless uprising against such forces would seem better than standing still. The numbers of people killed in Poland and in the very site where we stood were staggering. Now the neighborhood looks somewhat working or middle class, with blocks of apartments and some open spaces that must seem more welcoming in spring. In winter, with these thoughts running through my head, they just looked bleak.

The old city glowed in the afternoon light of winter, and our guide showed us how every building had been demolished in WWII and rebuilt with the intent of matching the pre-war period. Now there’s an ice rink in the plaza for visitors, lots of restaurants selling pierogies and sausages, and a statue of a mermaid. According to legend, there were two sister mermaids in Copenhagen, the smaller and weaker of which stayed there while Warsaw’s mermaid made the difficult swim to arrive in the city. A merchant tied her up so people would come to see her and thereby enrich him, but local fishermen decided they’d save her. In return she has been the city’s protector.