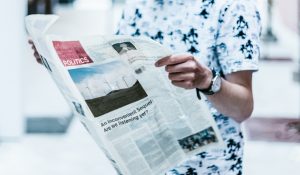 Two big updates to this story, stronger evidence than I could ever write. First, this graphic showed up a few weeks ago. It’s a clear way to see where the partisan bias actually resides, and its gradient. I can’t find the source to cite it, but if you take this graph, combine it with the ones below, and take it all with a grain of skepticism plus a healthy dose of your own reading (i.e., source material, triangulating, avoiding inflammatory pieces by people or groups with an obvious agenda) you can find a fair approximation of truth.

Second, a truly disturbing story emerged in the Times about exactly how fake news comes to be, making an example of one numnutz who created, illustrated and engineered the reposting of stories that were 100% inventions. I would like to throttle this fool and also, why is it legal to pretend to be something you’re not with the intention of misleading people for your own economic gain???

News (nooz), n. The who, what, when, where, why, and how of what’s going on in the world. Coming from news organizations, news rooms, news agencies; the Denver Post to the New York Times to Al Jazeera to Agence France Presse: organizations dedicated to finding and publishing news. There is bias, because it is human-made. News organizations have a stake in getting readers, and individual reporters can also be biased. See “neutral,” below.

Triangulation (tri-an-gyool-A-shun), n. Using more than one source to test a theory and see if it’s true. Also called checks and balances. Ex: paying attention to more than one news organization in order to judge veracity of the sources.

Fake news (faik nooz), n. False stories invented and circulated as if they were news. Ex: Clinton’s supposed child-sex-ring operating out of a DC pizza parlor, or Trump’s supposed upcoming trial for statutory rape. Saying something someone doesn’t like doesn’t make it fake.

Source (sors), n. A place, person or thing from which something can be obtained, such as me obtaining this definition from Dictionary.com.

Neutral (NOO-trul), adj. The quality of not preferring one thing or another based on personal or other criteria; impartial, non-partisan.

These terms and meanings have been lost in the debate about Trump. We have forgotten that news has checks and balances built in because the who, what, when, etc., of what is going on is verifiable. Others will check to see if there is truth to a story that, I don’t know, Los Angeles Starbucks shops are selling arsenic-laced lattes. The reporter who initially “scoops” that story might get readers at first, but if no one dies of arsenic-laced-coffee the next day, the reporter is out of a job. The news source that hired that reporter loses credibility. News services are not likely to publish a lot of arsenic-in-the-coffee fake news, because that agency would die as a result.

News is not necessarily what we’re looking at these days when we open up Facebook or Twitter. We’re seeing what’s called a feeding frenzy

Feeding frenzy (FEE-ding FREN-zee), n. Literally, when a group of sharks go crazy because there is lots of blood in the water. Metaphorically, this describes what our news cycle and human reactions look like at present.

In this new system, there’s flesh and blood in the water. People are screaming and rushing and pushing, and some have harpoons but their aim is not so good. The churning in the water is very fast – some news chum lasts seconds, some minutes, and some hours, but not much longer than that. There’s so much to replace it with.

A non-partisan foundation (Pew Charitable Trust) asked people (in 2014) what they thought about our news agencies. The average American is not neutral, because they’re human, but they’ve got the sharp edges of either liberalism or conservatism shaved off. The news services are placed on the scale according to how liberal or conservative are the people who report watching them in the last week. As you get out to the edges of the spectrum, you’d probably want to be careful. Far left or far right ideologues may make good important points on their dedicated channels, things that have been left out of the mainstream. But they have no check-and-balance because they’re on the end of the spectrum. They can also be crackpots, on both ends of the spectrum. All you have is their word on it. Just promise yourself to do your own homework on things they say, and you’ll be fine. Here’s some help – a curated list of sources commonly used in Facebook and Twitter posts, alphabetical and searchable.

2016-17 studies show similar results, even after the election (see below). Even so, Trump denied a question to a CNN reporter and called what they do “fake news.” But the average American still doesn’t see CNN, NBC, ABC, USA Today, etc., as biased. They’re right in there in the middle with the average American news reader. Even after this highly contested election, ABC had a credibility rating of 67%[1] and the peers (CBS, NBC, CNN, Wall Street Journal and the New York Times, with more than 60% each). MSNBC and Fox were a bit lower (55%).

Something else that is interesting in this table is that there are more news sources to the left of “neutral” than to the right, and the average respondent is to the left. There are more left-leaning news sources, though their “lefty-ness” doesn’t go as far as the “righty-ness” on the other side of the spectrum. Why might that be? Here are some possible reasons, and it might be a combination of some of these and some others: Combine that spectrum above, and these two graphs. Republicans tend to trust all news sources less. The news sources to the right of “neutral” are much further to the right of neutral than the lefties are to the left. They have to make a bigger splash, maybe be more sensational, to be heard. Far-right networks have to appeal forcefully to get the ratings to even make it onto this spectrum, not like the New York Times or CBS. And they must be contrary: one important line content they use is to say “the media are lying.” It is the biggest conspiracy theory in the history of conspiracy theories to say that all of those news sources – remember, they are verifiable – are lying. But that’s what the whole “fake news” dust-up is about. Those far-right leaning news sources are desperate to tear eyes away from trusted news from other sources, so the message is “the media are lying.”

One of the rights in our Bill of Rights is the right to a free press. Grave danger lies ahead for this right, when the president-elect says that a news source that most Americans see as pretty neutral is accused of “fake news.” He has ejected reporters for treating him critically and asking tough questions before. Since he was allowed to get away with what he did to the CNN reporter in the press conference, it is likely he will do it again, and again, as long as he can continue to deflect attention from his own failings. Just because news about him is negative does not make it fake, but if he can make the public think it’s fake, or even doubt a little, he is more likely to get to do what he wants. That’s not how the free press works – the press is as much a part of democracy as the political parties, and even more necessary.