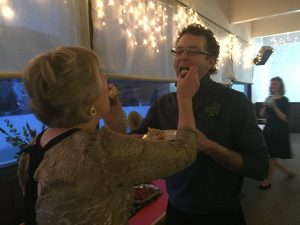 You may not have heard of a ThanksWedding. Leave it to my family to come up with a new holiday – Thanksgiving + Wedding, obviously. But who does that? ONLY US, that’s who. Because nothing goes better than overeating and dressing up. In Alaska. Striking. Brisk. Dramatic. Majestic. Nothing is small or unimpressive in Alaska. This is the view just before landing in Anchorage. Once when I flew up here in summer, a cowboy-hat wearing tough guy ahead of me in the plane said nervously as we approached: “I don’t know if I’d wanna come up here in winter. Some of them clouds got rocks in ’em.” He’s got a point.

My brother lives outside Wasilla (yes, where Sarah Palin is from. However, these days, locals say she’s from the moon.) Wasilla has all the modern conveniences, with one shopping mall literally just after the other.

But, no matter. It’s not like a puny shopping mall could detract from the wilderness all around. Morning aspens near Lake Lucille. Kyna and I woke up to this loveliness and a massive frozen lake where people were drilling for fish. (I guess you can’t frack for fish, or can you?)

What rural Alaska ThanksWedding would be complete without deep-frying something large and feathered? Kyle’s lifelong buddy Larry is on the fryer, a seasoned veteran with boiling oil and poultry. Kyna and Hawkeye the dog have the assist. Maureen serves up a gorgeous Thanksgiving dinner with all the trimmings, a family and group effort, about two hours before the wedding. Ha. Yeah. This really happened. The prime rib was outstanding, and the deep-fried turkey was gone so fast you’d have thought it could still fly. Next was the Wedding part of ThanksWedding Day – Maureen and Kyle! The officiant was Maureen’s son-in-law Nolan. Nolan made sure to include in Maureen’s vows that she’d always be available for babysitting…

The sun was setting behind the big window but it’s so low in the sky, it takes quite a while to go down. We celebrated the sunset together with the moment these two souls linked up for good and all. The only part where we pretty much lost it was when our Mom and Maureen’s Mom were remembered. It would have been more than lovely to have all parents there, but Maureen’s Dad stood for all of them. It was a short, sweet, and loving ceremony and they both got to say they’d be together forever and take care of one another always. I didn’t lose it then, even if other people did. Ha. Our Thanksgiving had all the trimmings, and so did the ThanksWedding – bridesmaids, a ring bearer, toasts, cake cutting, and cake-showing-in-the-mouth-of-the-beloved, which was much tamer than it could have been. I was not surprised by Kyle’s restraint, because he’s gaga over Maureen, but why didn’t she smear that stuff all over his face??? I guess she must be in love too! My little Miss Lauren, the most gorgeousest of all nieces, outshone even the twinkle lights in her champagne dress. Such a stunner! Maureen was the only one more beautiful, in gold and black and her wavy blonde hair… My brother cleaned up well too! His fern-green sweater and black jeans were pretty sharp indeed. My sister Kyna served as Best “Man” and Maureen’s daughter Marjory as Matron of honor, providing the toasts for the evening. My favorite was the dancing, begun by the newlyweds – who can CUT a dang RUG, by the way!

The next day we continued celebrating with a hike out to a tributary of one of the big rivers nearby – the Matanuska. The stream was mostly frozen over, so we jumped on it and smashed it with boulders and climbed across it on logs and skipped stones – which, by the way, is easier on ice than on the surface of a temperate pond. Just FYI. Kyle spends an inordinate amount of time in trees, even now. When he’s so old and everything. But hey, that’s my bro.

And, because we can’t stop there, photos of Kyle’s cat Bart, who can climb UP ladders but has a bit of a problem climbing back DOWN. Final joke, just like a M*A*S*H episode: Kyle does NOT like black licorice, which I bought for Ramon. The goggles are an especially nice touch.