Never underestimate the power of fear 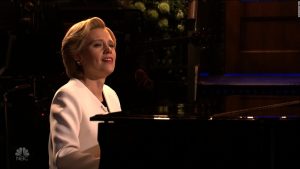 It took fifteen years, but the terrorists finally won. Never underestimate the power of fear: The Orange Grease Spot strummed it like a guitar. He ramped up the nationalism – not unlike a certain German version some 70 years ago – until the fever pitch was like cats screaming in the night. He behaves like a Balkan strongman (a phrase he probably thinks is a compliment) and revives latent racist vitriol for his own ends. The terrorists wanted to obliterate American democracy and freedom. This election put us giant steps closer to the bipolar authoritarianism that is their ideal foil. Good job, white, rural, undereducated voter!

Rump has lived his life with a silver spoon in his mouth and his hands and lips wherever he wants to put them; he has bullied and out-lawyered anyone in the way of one extra buck for his massive financial smoke-and-mirrors entities. It is the height of hubris to say he has interest in helping the COMMON MAN. The common man is less to him than the $100 bills he uses to wipe his sticky ass.

All the theories today! It’s about social policy and the pace of social change! It’s the revenge of the left behind! It’s Hillary’s sense of entitlement! It’s turnout! Former Obama voters voted for him! The press gave Trump a platform!

Not buying them. There is a deeper misogyny than I realized – that is, ANYONE but a woman, a woman we’ve conveniently and quite thoroughly demonized Just In Time For the Election! No, Hillary isn’t perfect – show me a man in politics who is, after twenty years of playing the game. She is held to a standard ten times higher than any of them, and 1000 times higher than the scumbag our country just voted into the highest office in the land.

So the rust belt, the sun belt, the middle of the country turns out and votes extreme red, red as Melania’s manicure, red as Rump’s yard-long tie, red as the boiling blood from the veins of democrats today. But you know what? The blue states save this country from itself. They give America the opportunity to take advantage of the future. They are like giant protective parentheses around a reactionary and self-defeating delusion, one that still believes in a homey agro-fantasy (one that it behooves the agroindustry to stoke, but is actually more subsidized than their Greasy Leader.)

The blue states provide intellectual rigor, plus theater, painting, music, movies. There’s an imperative to look critically at history, and produce thinkers at their universities and think tanks and newspapers. They question authority, and recognize that some things are, indeed, relative. They keep us humble while exalting us with achievements. The blue states offer an avant garde, which is in short supply in the rural red. Innovation. Information technology. International trade for the goods you want and the ones you don’t even realize our country is busy selling. The American image.

So the Rump voters want none of that. They want, what? the same small town, black and white, retrograde, 1950s-style inanity. The same values, the same lives, the same expectations, the same white faces, women behaving one way and men another (the latter with full impunity.) Since the man only understands simple sentences and fawning directed at his big… hands, it’s no wonder his plans for the future sound like either Pleasantville or old war movies.

If we’re really ready to leave the future to others, I’ve heard China is ready to take it on. The great American experiment in pluralism is facing The Existential Threat. And I am shaking in my boots.