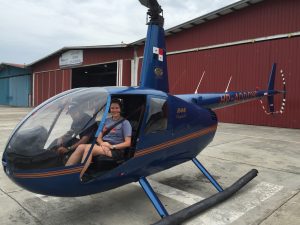 I couldn’t stop thinking of M*A*S*H and all the helicopters buzzing around that show. I don’t know if I ever imagined being in one. WIthout doors, you’re only sort of partly “in” it – there’s always this sense of being outside of it at the same time. My photos are pretty terrible once we’re in the air because I was terrified I’d drop the phone into whatever abyss we were currently over. The Canal locks are surprisingly narrow. In the museum the pictures of boats passing through the Canal in the Way-Back showed a ship of some sort with an expanse of water on either side. That’s not at all what it looks like today. The ships appear to need a good vaseline-ing to get through – which is why the Canal is being expanded at enormous cost. The pilot buzzed down over the Chagres River, which was clean and green compared to the Canal. The Canal is constantly being dredged to make room for the monster cargo ships, but this river just looks like a paradise for a kayaking trip. With lots and lots of insect repellent. The pilot took us down close, tipping this way and that as we rounded curves. It is the first time I can remember really being afraid I would pee my pants. What seems like unending green gives way to Panama City pretty rapidly. Architects with storey complexes seem to have made themselves very comfortable here. There are hundreds of skyscrapers, lots of them tiny pencil-thin ones. There’s a Trump Tower, of course, but me and my Latino brethren hate him now, so the pilot and I laughed at his poor politics, ostentatious design and fakey hair. Then we buzzed one that looks like a double helix.

I can just imagine the people in the BBVA building, rolling their eyes at the panicky tourist passing by gripping her camera as if it were likely to squirt out of her hands. The helicopter was a wicked-cool experience and left me high on adrenaline for a couple hours afterward. The seatbelt was fundamental, as was the very experienced, calm, fun pilot, Al at Helipan. Fully recommended!