This. Is. The Place 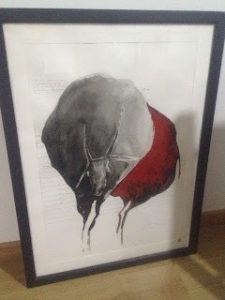 I got the apartment I wanted in Bogota. It’s so lovely. It’s light and airy like being in a plane or on a boat, navigating the city from the seventeenth floor.

This is the view toward the mountains. The apartment hasn’t been lived in recently, and when I moved in there was nothing here, not even a fridge. In Colombia, apparently, an unfurnished apartment means one without appliances. Do you know, I’d never bought a major appliance before? Now I’ve bought two.

For those of you who read the How To Do Your Laundry In Pakistan blog, you’ll be pleased to hear I was given a twenty-minute tutorial, with practicum, in the use of my new washing machine.

And two beds, plus a sofa-bed  for your visiting pleasure. I also promise sheets and a blanket. Here’s the poor sot who had to drag one of the mattresses up the curving staircase:

I’m on the 17th floor of a building that is honored with a plaque on the street – some kind of architectural marvel. There are three towers that curve around and some apartments have big terraces. The views from the apartment are indescribable.

And now I’m getting plants!!

The living room is big and shaped funny. I’m waiting till I go to DC next week to pick up some rugs – I really need some rugs! Right now it’s cold here and there’s no heat in the apartment. The floors feel really cool and rugs will make a difference. Here’s what it looks like today:

Still trying to decide on a coffee table but for now at least I have the beds, a kitchen table, and this sofa. And the grill, which is the first thing I bought!

Outside the window of my place, about ten blocks away, is the city’s tallest building, the Colpatria Tower. From nightfall till about 11 p.m., there is an ever-changing light show. Right now, for example, there are pictures of a hot air balloon flying over a valley; by the time I finish this sentence it will be a giant rubik’s cube or maybe spinning daisies. Nope, a dragonfly. It’s a bit weird and obnoxious, but also entertaining (especially given the lack of a television.) Check it out!

In other views, the towers stand right over the main city bullring. Bullfights have been indefinitely suspended by the pro-animal-rights mayor, but many days there are folks down there practicing, with capes and toy bulls – a guy pushing a one-wheeled, horned bull, kind of like a wheelbarrow. The toreros do their fancy poses and moves, with capes and all. I don’t know if I could handle a bullfight, but I’d like to see one, at least once. If they ever come back to the ring, I could watch for free!

The city is paying the drivers of hundreds of horse-drawn carriages to give up their horses and take on new careers. These fellows – young and old – seem to do odd jobs around the city, and few drivers seem surprised to find themselves stuck behind one.

Yes, anachronistic. Surely slows down traffic, too. But moving into the 21st century will mean the end of this form of working transport. For some reason I find that sad.

This drink is called ‘aromatica con frutas’ and different versions of it are sold all over town. It’s stuffed full of fruit and herbs, which you mash up before you drink it. The other very plentiful, very inexpensive drink is fresh juice – of twenty different fruits, at least, many of which I’ve never heard of before. Here’s one version of aromatica:

Bogota is also a BIG graffiti city. Some of it is commissioned, and beautiful; lots of it is sprawling and indecipherable. There’s plenty of social commentary, and some amazing murals. There are several in my neighborhood that are pretty spectacular, even if they’re fleeting:

This ‘ugly bird’ has been taken down since I took the photo, as the construction behind it is ready to begin. A ‘sister’ piece, on the same block and I think by the same artist, was dismantled and put together again, with the panels in a different order:

That’s a clever way for the owner, who probably doesn’t want graffiti, to get his revenge on the artist!

Here’s another one I like, especially given the city’s appreciation for bicycling. The kid with a flak helmet, hiding in a bunker, a hand grenade nearby, says, ‘prefiero bici’ –  ‘I’d rather be biking.’ I bet he would.

I met one of the grafiteros – graffiti artists. I had been staring at one of his paintings in my favorite coffee shop – Azimos, which you’ll get to visit when you come here. I didn’t know anything about the artist, but I asked how much the painting was, and I bought it. Because all of a sudden I was an Art Patron, the coffee shop owner informed me that the artist was coming to meet me. His name is Rodez and this is the painting:

It looks better in person, I think. There are pencil scrawlings on the sides, of sizes and descriptions, which Rodez says he added in memory of the naturalists who came to the New World to document the animals and fauna they found. It’s pretty cool.

Rodez is no kid, but he’s no oldster either. When his 15-year-old son got caught painting graffiti, Rodez was furious – until the son begged his dad to come along. Now it’s something they share – you know, like Indian Guides or Thai cooking or something. Now I’ve volunteered to help with one of their commissioned works, at an old folk’s home in the center. From blank white walls the folks who live there will now get crazy colorful fantastical beasts. I’m sure all I’ll get to do is wash brushes, but it should be fun.

That’s it for now – a long one I’ve been meaning to post for a while.