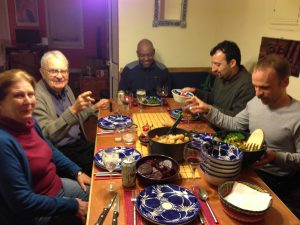 DC is kind of empty for the holidays – at least, that’s how it seemed to me. It’s such a transient city – many of the people you meet are not from here, so they go elsewhere for family events like Christmas. I certainly do.

But not this year. This was Kyna’s first Christmas in DC so Dad decided to come as well, and arrived in time for Kyna’s birthday celebration. A friend directed me to Black Salt, an upscale eatery in an upscale neighborhood of DC (where I had NEVER been, despite living here 13 years or something ridiculous like that. Ask me if I’ve been to X, Y or Z scummy part of town, sure, yeah… but Palisades? Where’s that?)

Anyway, here we are at dinner.

I ate a whole fish called… what was it called? Let’s name it Llewellyn, for lack of memory. Kyna had an halibut, quite obviously called Eric. And Dad ate this dish of stuff that had legs and tentacles and heads poking out of it like an undersea genetic experiment, and he had to beat all these little critters into submission before eating them and putting their luminescent exoskeletons on a plate right… in… front… of… me. Fantastic.

He did good on the gift though. Dad usually gives us a check for the number of years old we are, or somewhere near abouts, in case he has the year wrong. Well, imagine Kyna’s surprise when he pulled out a little, black, velvet jewelry box. She tilted her head at it, scrunched up her eyes, put the back of her hand on Dad’s forehead (checking for fever), and then opened it to find diamond earrings. Had I wanted to I could have knocked her over with a wee bittie feather just then.

Blowing out the candle on her trio of creme brulee, I wonder what she wished for?

We spent a fair amount of time cooking during the time Dad was here. Not traditional Christmas geese or turkeys, oh no. Here you can see me putting cheese on a cutting board! (Don’t try this at home, kids.) The jar in my hand contains fig chutney, with which one is to dress one’s brie before eating. I know, this is pretty advanced cookery. Don’t be upset if yours doesn’t come out as good, I mean, I’m practically a professional.

One night Kyna created a beef stew that was fantastic. Shane took one look at it and asked about the provenance of our Dinty Moore. Kyna is still going to get him back for this.

One terribly blustery day we found ourselves in the U.S. Botanical Garden, an indoor respite from the winds that threatened to carry us back to Kansas. Inside it was warm and the sun was coming in through the greenhouse roof. The air felt humid and was full of mist as the plants were watered. There was a fern that seemed to have its eye on Kyna. It had leaves that were the size of volkswagons and it could easily have eaten her whole. Fortunately we escaped unscathed, but it was a rough moment walking back out into that cold.

On Christmas Day we coaxed Dad into a somewhat nontraditional meal, more like what we’d have eaten in Pakistan. Lamb and eggplant in curry sauce with mint and coriander; Chicken Tikka Masala; dumplings with fig in a cashew sauce; spinach and cheese stew. It was nearly impossible to stop eating. The waitstaff were humbled by our thoroughness; in some cases we even ate the toothpicks.

Then we rolled out of there, dropped Kyna at home so she could rest up for work the next day, and Dad and I went to feed Shadi (Ali and Shane’s cat, who was under my charge this week.) She asked for the “kitty bag” from the restaurant but I lied and told here there weren’t any leftovers.

Dad and I went downtown to check out the White House Christmas Tree, and my long-held belief that Washington was empty on Christmas was shattered for good. The traffic was incredible, and all Christmas goodwill was long gone for these tourists, scrambling over the battered husks of other, weaker people to get a photo of the ugliest tree I’d ever seen. We gave up trying to get closer to it, and instead took a tour of Christmas lights – including the tree at the U.S. Capitol. No one was waiting to see it, but it was much better anyway.