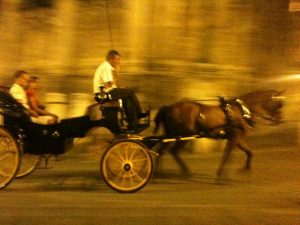 After a blistering period of work through spring and summer, I began to make plans to take some time off. I was still in Kabul, finishing up a final project report there and also another one being turned in back in Washington. It was grueling, so I allowed myself breaks to poke around on the web and look for someplace fun to visit. SPAIN, I thought, my head spinning with how fantastic that sounded, compared to being shrouded physically, emotionally and occupationally in Afghanistan. Through strange fortune, a very dear friend was going to be visiting her inlaws in Spain, so I figured fate was sending me there.

I told my colleagues at work in Kabul what I was planning. “Oooh…” they cautioned, very concerned. “Be careful! Spain has had some protests lately…” I decided I’d brave it despite their well-meaning warnings.

Getting to the airport in Kabul, I felt an unspooling begin to happen – I had been so tied up with work that I thought my neck would snap under the weight. After landing in Madrid (after overnight flights with multi-connections, the only way I seem to know how to fly) I boarded one more flight to Oviedo, in Asturias, along the north coast.

Mireya and her family picked me up and showed me around their region, invited me to the baptism of the newest little one in the clan, and kept me singing till three in the morning. Seriously – this is one singing family.

We took excursions to the area’s sites, shopped, ate and drank…

Mireya and her family invited me in like one of their own! But when I go back, I resolve to know the lyrics to more old Spanish songs!

Then I flew to Seville. I was sitting on stone steps in the historic center, listening to a busker play classical guitar, when these folks went past. This pic makes it look like these tourists are getting the ride of their lives, but actually it’s just the low light setting. What a lovely night.

Then I went for tapas and found a trio of Sevillan friends who invited me to join them. We went around the city together – on a Tuesday night, mind – and saw a flamenco singer in a cave-turned-bar:

From there I went on to Granada to see the Alhambra – a fortress dating back about a millennium. It’s too magnificent to capture in one picture, even the following few don’t do it justice.

Around every corner there was another lovely view, a detailed mosaic, a fountain surrounded by gardens. And about ten million tourists. Including me.