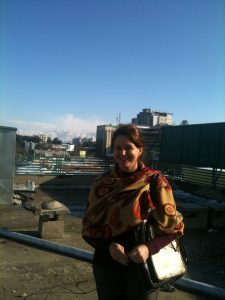 Oh, yeah, right, like I have anything interesting to report from Kabul. If I want to be important, daring, bold, or devil-may-care, everyone else here has long since beaten me to it. There’s an article in the local expats’ magazine with the top twelve things you should do to appear to be “in-the-know” here – like number 5, “Make the odd trip to the wild hinterlands and make sure you write about it on Facebook or Twitter, telling everyone how tough it was (you broke a nail or got athlete’s foot.) Take pictures of yourself in body armor somewhere.” (Afghan Scene, 2012, Angry Advisor column.) Damn! I was going to do that, before this writer made it sound so trite. The writer also suggests that you “go to parties and stand around looking bored until someone asks how long you’ve been “in-country”.” – hilarious. It’s so weird here that way: there are these flocks of expats roaming around the restaurants and bars and whatnot, standing out like sore thumbs when around Afghans, and (we hope) somehow doing something to make things better here.

Because, dammit, things need to be better here. The people I have met are so bloody tired of war, and not-war – this in-between state that has everyone watching their surroundings as if the nearby bakery is going to blow up. The country’s own development has been smacked backward in time over and over by decades of other countries using Afghanistan like a pawn in a chess game.

Okay, enough politics, back to my own cool personal tales of bravery and excitement.

Tale Number 1. Lockdown. The first week, I wasn’t allowed to leave the compound at all, for any reason. Sounds cool, right? Oh, Keri, how dangerous! How frightened you must have been! Well, yeah, sure. But even though I’m American, I’m not coalition forces or embassy staff or anyone that would be targeted. I’m a lowly contractor. My fear came from my media diet, not from reality. Here are pix from our place: me on the roof, the bamboo shields so I can go on the roof and not be seen, the barbed wire fence around us and the gorgeous mountains behind. That’s what lockdown looked like to me.

Tale 2. Lockdown lifted! PARTAY! Last Thursday I went to a shindig at the Croatian base, entry to which I gained by virtue of the two enormous Croatian guards who keep us safe on our compound. Walking through the base at night was eerie – tanks, man, there are loads of them, and in silhouette they are very daunting. I can’t imagine facing one in the stark light of day.

The Croatians fed me some spicy pork and beans provided by the resident chef (and you know, pork here, well, it’s not very common) and then we all went to the garage for box wine and karaoke. Yeah, the garage – looked like someplace Kyle would have enjoyed. Everything was neat and orderly (aside from the people.) On learning I was from Denver, they played “Rocky Mountain High” in my honor. The rest of the time, it was nostalgic Eastern European music (there was also a Hungarian contingent) and that kind of dancing where you join hands in a circle and say “Ho!” a lot.

Tale #3. Around Kabul. On Sunday I went out to lunch and then to a bakery, and then to the office of our subcontractors, to talk turkey. It was almost the full day outside the compound, driving through massive gridlock, watching people through the car window, trying to figure out at least one letter from the alphabet (no luck yet; I’ll keep you posted.) It was a blustery day, so the pictures make it look bleak. When the sun is out, the city actually sparkles – like a high mountain town. In reality, it’s just about a mile high – which I noted to the subcontractors, and suggested a Sister City relationship with Denver. He said he’d get back to me.

The city is surrounded by mountains, and on many of these the houses go straight up the side of the rock. I saw an old-school Ferris Wheel but wasn’t fast enough to get the picture. I wish I had; it makes things seem so much more normal, family-oriented, or something, rather than the media images we all have in our minds. Anyway, here’s a mosque under a heavy sky.

And here are those houses climbing up the mountainside. (Note the bicyclist in the shot – my crappy phone camera makes him look like he’s going really fast!) Other scenes were even more dramatic – clinging to the lamely to the rock walls like something out of a Roald Dahl novel. They’ve only recently gotten electricity there – made me think of the favelas in Rio.

The data collection supervisor in the field gave us a good idea of what had happened out in the provinces and districts while my big ol’ dataset was being carefully assembled from the experiences and opinions of nearly 2000 Afghans. (The video above shows him writing notes during our meeting – it’s so strange to me (still) that they start at the right hand side of the page.)

Anyway, twenty-two data collectors went out to various parts of the country to collect data on how people’s disputes get resolved in their villages. You might have heard of the “Loya Jirga” on TV, when all the powerful regional leaders got together to make decisions about Afghanistan’s future. The same thing happens on small scale in villages, where the “white beards” form a jirga to help people resolve disputes – like whose livestock are grazing on whose land, who’s taking water from someone’s well, or whose son beat up some other kid. My research is on how this works, now, so that after another team comes in to train those white beards (and elder women as well), we can check: has dispute resolution changed as a result of the training?

So now I’m writing the report on the data collected. It’s a lot – lots of stories told by people involved in disputes (white beards, livestock owners, parents of fighting kids) and citizens in general. I’m back on personal lockdown – I need to get the report done before I leave, so even though I’m allowed to go out, I won’t.

So I take my fun where I can find it, like this meal cooked by our Afghan chef:

Baked chicken and mashed potatoes covered in gravy, peas-n-carrots cooked to a pulp, and a salad – looks like something my mom would have made, circa 1977. It’s pretty strange to be HERE, and eat THAT.

Another thing I find hilarious in this house in our compound is some special photograph wall tiles that are grouted right into the kitchen backsplash. Here are two photos:

Both show delightful, well-lit breakfast scenes – vases of flowers, flaky croissants and plump muffins, zig-zag cut fruit with maraschino cherries jauntily floating on top, brimming glasses of orange juice… and hamburgers. I just imagine someone setting up these scenes, getting the lighting just so, arranging the spoons… then saying “Alright crew, where’s the hamburger? How can we have a breakfast scene without a hamburger! Get it in there!”