Be my Pakistani Valentine 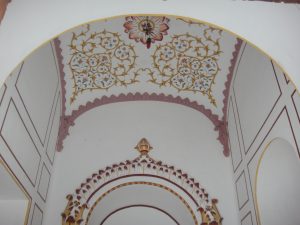 Some great folks from Kyna’s Medical Unit and Embassy, above, including Shafique, who Kyna wants me to marry. Coincidentally, Kyna’s gardener, Arshad, wanted to marry me. Very odd triangle, but I guess not so strange in a land where arranged marriages are the norm. Below, Arshad is the darker-skinned fellow in between me and Kyna in the first photo. The next photo shows the women of Arshad’s family, with whom I had quite an evening. Arshad drank and drank, but was quite unused to alcohol (it’s not exactly sold on every street corner there.) Later I made the mistake of dancing with Arshad. Nothing touchy – strictly at a distance. I think it was Santana from Supernatural. After we danced, his mom (pictured below in head-to-toe fuschia) jumped up and kissed me, speaking rapidly in Urdu with the biggest smile you can imagine.

At that, Arshad’s brother-in-law ran into the kitchen and grabbed the sugar bowl, then came back to the party and gave everyone spoonfuls right into their mouths. Hardly hygenic, but something else weird was going on here… Arshad’s sister grabbed my wrists and asked me, Are you excited to be married? At which I must have looked quite stricken, because she then asked, quite concerned, “Don’t you want to be married?” I stammered something about, sure, someday, when I met the one I loved… to which she answered tenderly, “You will find a lot of love in our family!” Cut to the garden outside, where I hid for the next hour or so…

Kyna and I were singing something meaningful and deep here, by Eric Clapton. I hope so, because the rest of the music played that night was Pakistani, and if we’re singing that (into pine cones, like in this photo), we were drunker than I remember. (Also possible. It was a long night.)

Rose and Faisal have three kids, the above-pictured one is the oldest, named Muscan. She dances like a dervish in a gorgeous dress at the party – nearly all night.

It was a fantastic party.