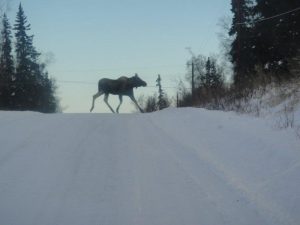 This will be my longest blog yet – tons of fun with Kyle, Maureen, Lauren, Dad and the cats in Alaska for Thanksgiving.

Kyle and Maureen live in a beautiful high-ceilinged house near Palmer and Wasilla, Alaska. Lauren spends her weekends there, often doing homework – she’s an amazing smart young woman and working hard to fill up her brain with useful stuff. I was pretty shocked to hear her reciting Spanish poetry – wow!

We saw this Mama Moose on the road near Kyle’s house. The baby had apparently already crossed the road so we didn’t see him or her.

The whole area is gloriously beautiful. It’s about an hour and a half from Anchorage, and there are mountains in nearly every direction. The sun is up for about 6 hours a day right now, but we had plenty of snow so some days we didn’t see the sun at all.

Kyle’s place backs up on a tiny air strip, shown in the picture below. There’s a sign that says “Yield to Aircraft” and a windsock. We saw planes circling over it, as if to land, but never did see one actually come down. It’s covered with snow but the snow is regularly tamped down by a neighbor, who drags a hunk of chainlink fence across it.

These two are shots from Lazy Mountain, where I drove with Maureen and her daughter Estelle. It was an incredibly cold and windy day. The reason we are both screaming is probably because we are freezing our butts off and want to get back in the car.

Kyle’s cat, Bart, is happiest when touching Kyle in some way, like this shot of him at the computer. I think he should watch out for carpal tunnel, but at least he has not bothered the cat.

Bart has the run of the house, including up this ladder to the loft. Bart’s got one blue and one gold one, making him look a bit ethereal, especially with all that white fur.

Here, Bart is licking Kyle’s head. I think that is really funny, especially because Kyle does not seem to mind or find it strange.

Even funnier is this video of Bart gettin’ jiggy with some catnip. Dad is worried about the legality of this video, but I assured him that medical catnip is approved in Alaska.

What follows is a series of pictures of Kyle, Lauren and I cleaning snow off the roof. This seems to be something Kyle has to do a lot – he’s got a whole process, tying the rope to a string and hucking it over the house using a tennis ball, knotting the rope on the railing on the other side of the house, then walking up the steep angle while holding the rope. Then he slides down on his butt till the snow breaks off, and rides the snow to the edge of the roof. Then he launches himself off to the ground, hopefully landing in soft snow.

With the quantity of snow I saw while I was there, I’m not surprised this is necessary. But Lauren and I couldn’t let him have all that fun by himself. Lauren follows him up first, then I had to try. Maybe if you scroll through the pictures rapidly, it’ll look like a movie.

Thanksgiving was a complete feast. Not only is Maureen an amazing, fun person whose company I loved while I was there, she cooks like a maniac. Actually, no, that’s not right – she’s the calmest, most contented chef I’ve ever seen. She makes cooking look easy and relaxing and fun. She made all the Thanksgiving specialties, plus homemade bread and a pecan-pumpkin pie that, as Dad would say, should be illegal. De-lish!

Here are Kyle and Maureen at the head of the table. Kyle, being such an eater, thinks pretty highly of Maureen. He is swoony around her, and I don’t think it’s just the food! Maureen – welcome to the family! Hope we didn’t scare you off!!! :>

This is a pic Dad took of Maureen and Kyle in front of their wood stove. It’s a pretty amazing stove, does the job of heating the house and looks nice too. Most of the time it smells great – a light woodsy smell, making it feel like you’re “really” in Alaska.

Only once did this smell get tarnished. Maureen’s cat Piper found a hot spot with her bottle-brush tail and burned the crap out of her long fur. As Piper is a bit… reclusive, we never saw the extent of the damage, but we smelled it the rest of the day – yuck!

Now, on to the most marvelous kid in the world. She’s my niece, so it’s possible I’m not entirely unbiased. But I think I can speak with a certain amount of objectivity when I say, “Lauren is stupendous.” She is smart, athletic, capable, gorgeous, funny. She can hold her own in any snark-fest. She loves animals, the outdoors, joking, sarcasm… in short, she is a perfect Culver. I am so glad she’s my niece.

We put on tattoos from my National Novel Writing Month kit. I’m bookish. She’s a mugger.

She is also adept at braiding hair. After this photo was taken, I looked mahvelous.

And it must be said, we played a lot of ping pong while I was there. At first we hooked it up on the kitchen counter, but it didn’t give us enough room to swing. So Kyle brought in a piece of plywood (of COURSE he had one!) and we set it up as a post-prandial digestif.

Here’s me playing Dad, in a video taken from the loft. I, ahem, beat him.

I also BEAT KYLE!!!! But Kyle, unable to handle publicity of his loss (first of any kind to me), pulled the film out of the camera. Luckily I have family members who can attest to it. I. Kicked. Kyle’s. Butt.

I made it through 2011! Keri Culver, you are a wonderful writer – so evocative. I’m glad I decided to go back to the beginning and read all of your posts, in order. Excelsior!