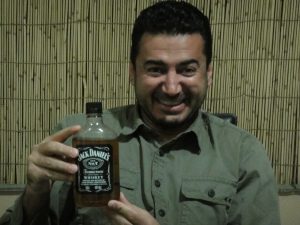 I’ve arrived without a hitch, after that long wait in the Dubai airport. I feel much better, having slept on the flight to Kabul. The guest house and compound where I’m staying is extremely nice, and seems well “fortified.” There are armed guards who have worked for the company for years, and inside it’s a very comfortable home on one side, very modern with all the conveniences, and offices on the other side. There’s a gym and a snooker table (Dad? A little help there? How do I play snooker?) I brought my ping pong kit too.

They gave me a tour of the home and I’ll just be here tonight, no going out or anything. Three meals, daily room cleaning and daily laundry are included in the room for $11 a day. NICE!!!! It’s super comfortable. There was one room with a picture window that let in more light, but I took the more “inside” room out of an abundance of caution. Paranoia, probably, but whatever. There’s a Salvadoran man working here and we had a nice chat about Latin America. How nice to speak Spanish so far from that side of the world! The big burly security guard named Paul picked me up at the airport with a driver, Jamal. Then there are staff members all over the house – because Saturday is a work day. It’s a six day work week (not like that’s anything new…) and Friday is the day off. Who knew?

When I was in line for the immigration counter, the other Western women put on scarves – lucky I had thought to bring one. I didn’t have a mirror, and had never practiced, but I made it through immigration and out to the waiting car without a hitch. Probably I look like a rookie. But I’ve never been in a country like this. The closest thing, geographically, was the south of Russia, which is nominally Muslim and the call to prayer rings out each night over the city. But there, it was pretty secular – people didn’t stop what they were doing to pray.

I of course beat everyone in the house except the Crazy Croat, who could probably hit the ping pong ball through the wall if he wanted to. But I did pretty good. Dad would be proud.

The client asked for a “working dinner.” Who ever heard of such crap? Working lunch, sure. Sit around and eat dry chicken and talk about deliverables, we’ve all done it. But a “working dinner”? C’mon. The security guys heard our conversation about this, looked at each other and smiled: they’ll be in Kandahar when the working dinner happens, and will miss it completely.

Note to client: you can be sure you’ve proposed something stupid when people would rather be in Kandahar than participate.

Being here is weird and close, with working and living together. But it’s appealing. I could see living like this, focusing on a project I enjoyed and putting my heart into it. Why not – there’s not much else to do with one’s time besides ping pong.  I did meet a nice guy:

Wali’s very friendly! And he likes Jack Daniels. I’m sure he and Kyle would get along famously.

[…] late-season snow in Pristina, spent Father’s Day in Mexico, my birthday in Zimbabwe, then Afghanistan fearing I’d have no more birthdays (which was stupid, it wasn’t even dangerous!), and […]