Today is your birthday!!! 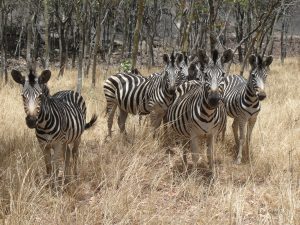 I woke up on my birthday in Harare, Zimbabwe. A quick run, breakfast, and the taxi was ready to take me out to a safari day camp about 40km from the city. We got stopped twice by cops – I think a face like mine looks like “MONEY” as they see us pass, and they want to see what I’m willing to pay for free passage.

The first thing I did when we got to the camp was to take a canoe out to the center of a choppy little lake, with marsh on one side and a very green farm on the other. Returning from the middle of the lake, we were pushing into a headwind – row, row, row, row, and barely go. We made it, but I know of three pairs of arms that seemed to be made of boiled pasta afterward.

Let’s see, what’s next on the Birthday Bucket List? Riding on an elephant, of course! This big fella is called Patsy. His hide was so thick and the hair so coarse, there would have been no way to do this without that blue blanket. I never knew elephants were like that.

Update, 2017: I thank my friend Stephani Chapman for opening my eyes this year about animal abuse. I didn’t see it on this trip, but that doesn’t mean it wasn’t happening, and elephants-for-tourists are sometimes very mistreated so they’ll give us these rides. I’m sad about it. Now, back to the original post.

There were zebras following us. Maybe they thought we would give them the carrots. The guides told us that zebra kicks are among the most menacing dangers in Africa – even lions fear them. Here they just look kind of striped and small. But it’s all in the angle – I’m actually quite far from them.

The safari camp cares for orphaned or injured animals, like this lion, Bryon. Oddly enough, that’s also this guy’s name. He’s a BBC correspondent in Zimbabwe. They look like they’re having a nice little confab about life on safari, and you’d swear that lion was smiling.

One of his fellow lions, in a separate enclosure, was not nearly so sanguine about our visit. This one is not tame, but rather a rescued lion who will live out his days with a lovely female (not quite visible in the photo) which he is protecting at the moment this photo was taken. The guide put his hand and my camera through the enclosure fence, then called Brutus’ attention. Brutus obliged, scaring the living crap out of everyone on the tour. He was behind a fence, but he is so big and forceful, no fence really looks strong enough.

Even when we’d left the immediate area of Brutus’ enclosure, he continued to warn us of what would happen if we messed with his lady. Makes for interesting audio, though the video’s not that exciting…

[…] Bill Clinton and late-season snow in Pristina, spent Father’s Day in Mexico, my birthday in Zimbabwe, then Afghanistan fearing I’d have no more birthdays (which was stupid, it wasn’t even […]